On Electrochemical Cells and Salt Bridges

We're studying the topic Electrochemistry at school now, and I've got a few doubts regarding electrochemical cells and salt bridges.

What I am going to do is listing out (point-wise) what I understood from class, and then pose my questions (in bold). The logic behind listing out what I understood about the topic beforehand? I've a very strong feeling I'm harboring some serious misconceptions regarding the topic, so if I list out what I do know, then hopefully someone can alert me to an incorrect point, and also correct it.

During the course of the reaction,

I'd appreciate it if anyone could proof-read those points. Also I have doubts whether the Solid-Liquid Junction can also be called the Helmholtz Double Layer. I made these points in class, and I let my teacher go through them, and he's in agreement with them, so I don't think this is a case of talking down the points wrong, at least not with respect to what was mentioned in class.

Now I asked my teacher, Q1: Screw the partition. Why not simply have the two half cells in separate compartments kept at a distance from each other, instead of using a 'partial' barrier like the porous asbestos partition? Wouldn't that eliminate the possibility of a Liquid-Liquid Junction being formed? 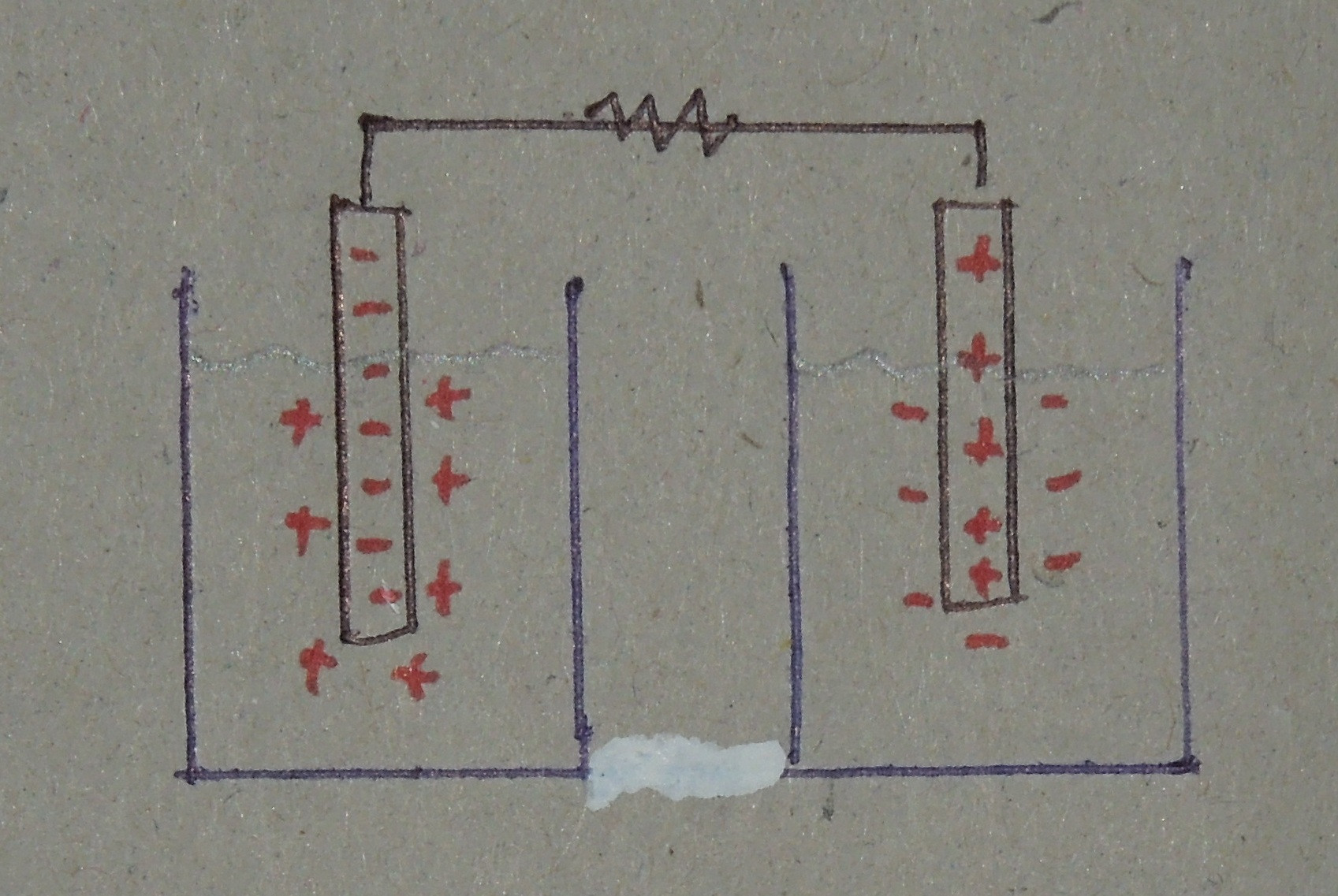 His answer: Well they're ions buddy, so they'll attract each other anyway and accumulate at the sides of the compartment, after all....they're charged. So even though that wouldn't result in a Liquid-Liquid Junction, there still wouldn't be any potential difference across the electrodes, so nil current. Plus, if you separate the compartments like that, it'll just take up space; compact electrochemical cells are more convenient to use. 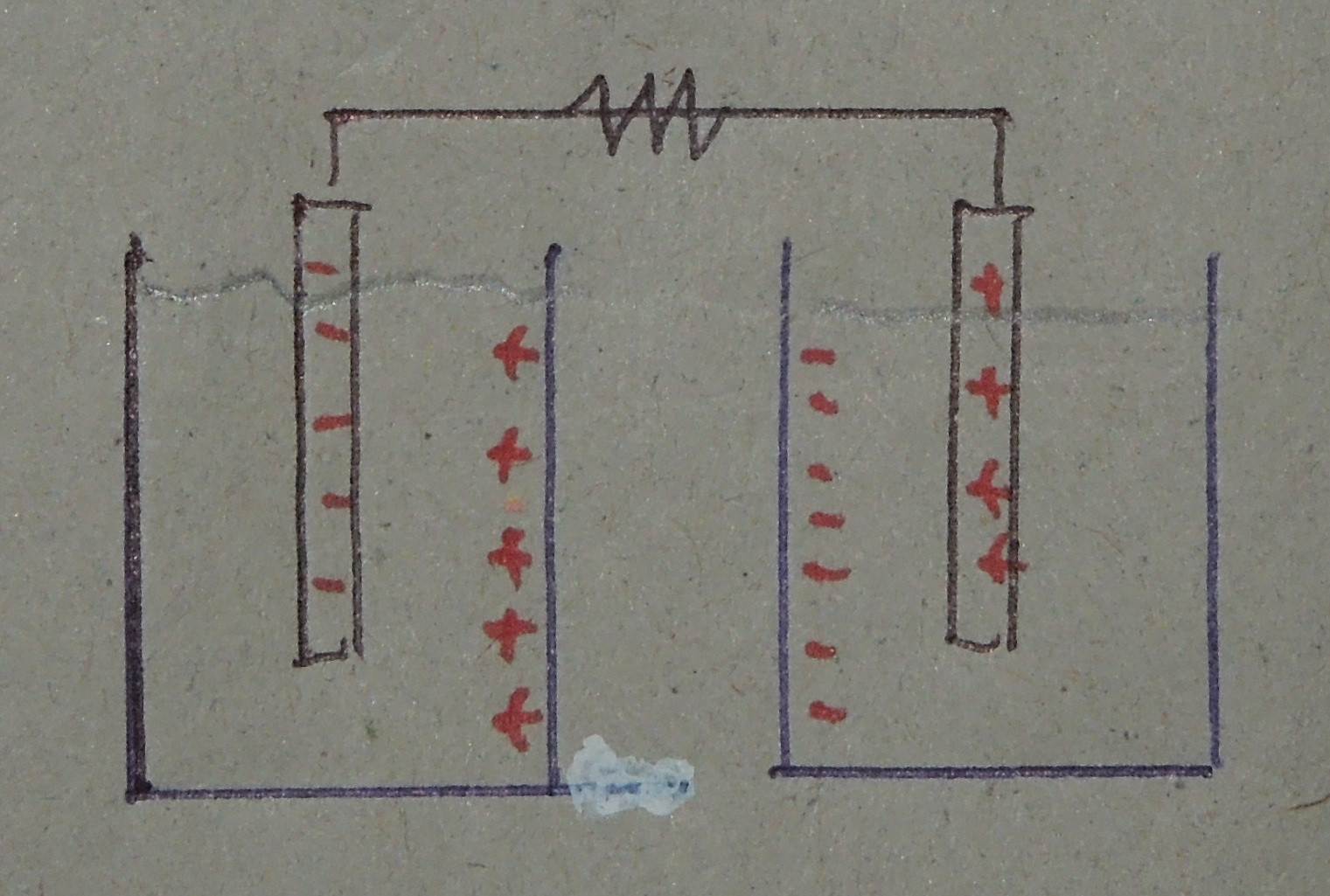 And yet again, Q3: Are all the points I've mentioned correct?

The complete story would hardly fit in an answer (and, moreover, it is explained in any decent textbook on the subject), so I'll focus on the details that are especially wrong. First of all, the double electric layer, being electrically charged, creates an electric field of its own, and thus shields the rest of the solution from the electrodes and their field. Second, the electric forces are really, really strong (like a thousand times stronger than you seem to think, and even stronger than that), and therefore the said layer at any point contains but a very tiny portion of metal ions. That portion suffices for creating an electric field which would completely negate the field of electrodes. The vast majority of metal ions float freely inside the solution, having no idea at all that they are being electrolyzed.

As the ions build up, the shielding becomes ever more perfect. Dissolve some $\ce{NaCl}$ in a glass of water without any electrodes or anything; the ions would float freely in the solution. Do they feel mutual attraction? Well, in a way, they do. Do they assemble into strange walls across the glass? I've never seen anything like that. Now, the ions in you cell (the majority that does not participate in the double layer on either side) feel exactly the same way as ions in that glass.

Electrochemical cell, if set up properly, will give current until one of the electrodes is completely eaten up. The need for a salt bridge has absolutely nothing to do with electric effects. Rather, it serves to prevent the mixing of solutions, which are presumably different and better left that way, for fear that otherwise they might react with the electrodes directly.

As for the cell with separate spaces and no bridge, it will stop working right away, much like the light bulb connected with a single wire to one pole of a battery.

Not the answer you're looking for? Browse other questions tagged electrochemistry electricity or ask your own question.

3
Can nanotechnology reduce electrode losses in electrochemical cells?
0
Why must the movement of electrons through the wire be balanced by a movement of ions in the solution?
3
Recharge battery using heat
0
How do the two half cells of Daniel cell know when they are connected?