Attached is the structure of one aminoglycosides, kanamycin. I understand that the ring binds to 4 position of 2-DOS is numbered with prime (') and sugar that links to 4 or 5 position of 2-DOS is numbered with double prime ('') but my question is how to do the numbering for 2-DOS (center ring). Can anyone teach me how? I have searched through Google and still have no idea on it.

Like @orthocresol said in his comment, biomolecules are often numbered by convention. The 'traditional' numbering for 2-deoxystreptamine is shown below on the left, and IUPAC numbering (not used) is shown on the right:

The most likely rationale for the traditional numbering is that the compound is a diamine so the numbering starts from one of the amino substituents and goes towards the other one.

EDIT: OK, now I understand exactly where lies your confusion. The molecule of 2-deoxystreptamine (2-DOS) has a plane of symmetry. If we are to number the molecule alone, it doesn't matter from which amine group we will start. But as you noticed, the kanamycin is asymmetrical and there are indeed two ways to number the ring of 2-DOS. To solve this problem, we need to look on the structures of other aminoglycosides and their biosynthetic pathway. Many of the antibiotics from this class are biosynthesized through an intermediate compound known as paromamine (I prefer Haworth projection): 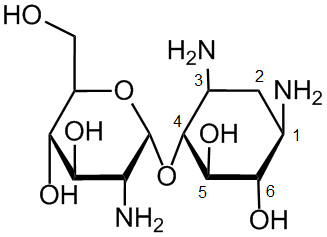 The numbering is logical - if we would start from the other amine then the glucosamine substituent would be at atom 6 (against the usual rules of numbering where we prefer lower numbers for substituents). Most aminoglycosides can be divided into two groups: 4,5-disubstituted (neomycins, paromomycins) and 4,6-disubstituted (kanamycins among others). Therefore the red numbering in the original question is the right one, if we assume the synthetic pathway described in this article:

Not the answer you're looking for? Browse other questions tagged organic-chemistry drugs or ask your own question.

9
“Tie-breaker” rules for IUPAC nomenclature of organic compounds
5
Reaction mechanism of a terminal alkene with an anhydride
6
What is the proper Lewis structure for HCOOH?
5
Do the π-electrons from the C=O bond in tropone contribute to Hückel 's rule?
4
What is the correct Lewis structure of diazomethane?
28
Why is cyclooctateraene shaped like a “tub” rather than a “chair”?
0
What is it meant by two different groups in stereoisomerism?