I only have a basic understanding of organic chemistry, so sorry if the equations don't make sense.

Polylactic acid polymers are creating a lot of interest these days because they're biodegradable. On the downside, corn starch is often one of the starting materials...and corn is also used as a food source, so there's some controversy over the wisdom of this approach.

Plastic from starch. The recipe for the plastics-from-starch uses starch, glycerol, acetic acid (the $\ce{C2H4O2}$ in your equation) and water as a solvent. (They do not add lactic acid, the $\ce{C3H8O3}$ in your equation, but lactic acid can be produced by hydrolysis of the starch.) With the starch-acetic acid-glycerol recipe, you do not actually make a PLA polymer, but a starch polymer that is somewhat like it instead. (Ref)

So, starch is a polymer that looks like this: 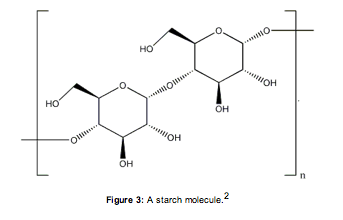 In water, it tends to ball up into globular clusters due to hydrogen bonding. By adding acetic acid and heating the starch in water, you "denature" the starch and turn it into "disordered chains" that stretch out. When you let these disordered chains dry, they become entangled and form a flexible film, the plastic. In this recipe, the glycerol is included as a plasticizer, so it is unchanged chemically in the reaction. The glycerol also helps to keep the starch stretched out by stabilizing it with hydrogen bonding. Plasticizers (as the name would indicate) are additives that increase the plasticity of a plastic and make it more durable or flexible. Changing the amount of glycerol in the recipe can have a big effect on the strength of the plastic film you make. This is the process you're seeing in the videos, I think.

Making PLA from starch. This is going to be a bit of a challenge to explain depending on your understanding of organic chemistry, but hopefully the pictures will help. When you make PLA commercially, you digest starch, usually with a bacteria, to turn it into lactic acid (see picture below for the structure of lactic acid). This lactic acid must be purified to make a high quality product. If you just combine a bunch of lactic acid molecules to make PLA, one water molecule would be lost each time they combine...sort of like this. (This is an acid and alcohol combining, not two acids, but the idea is the same.) The water in the polymerization reaction leads to a poor quality plastic.

So, in commercial synthetic schemes, two purified lactic acid molecules are reacted to form lactide...they come together in a controlled condensation reaction, with the loss of water. (Ref for picture.) 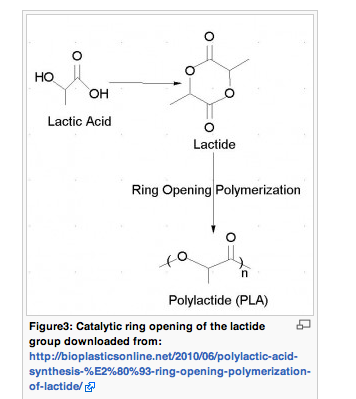 Now you can use the lactide, i.e. "lactic acids with the water removed", to do the polymerization to PLA. You add an initiator to open the lactic acid by breaking the bond between the $\ce{O-C}$ in $\ce{O-C=O}$ and this gives you 2 lactic acid molecules hooked together...which react with another lactide molecule to add two more lactic acid molecules to the growing chain, and so on. And that's how the PLA forms.

Probably more than you wanted to know!

19
Addition of HOBr across C=C
3
Verify my expected product of two acid/base reactions and does chosen solvent change reaction?
6
How can the trityl tetrafluoroborate function as a Lewis-acid catalyst
8
How to dissolve PLA (polylactic acid)?
6
Repeating unit of poly lactic acid (PLA)
2
What does A. R. in A. R. sodium nitrite mean?