Why is this cycloalkane name giving the lower number to methyls over ethyl?

This compound is given the name 5-ethyl-1,1-dimethylcyclooctane in a video I watched, and also in ChemDraw: 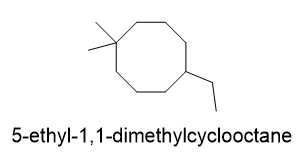 My question is: Why is it called that instead of 1-ethyl-5,5-dimethylcyclooctane?

Two sources taught me that, first, we ignore prefixes like di and tri (but not iso), and, secondly, the substituent that comes first alphabetically gets the lower carbon number, or we count the carbons from it. And since, in this case, ethyl comes before methyl alphabetically, I would've thought that it gets the 1, not the methyl? Why is this not the case here?

In the current version of Nomenclature of Organic Chemistry – IUPAC Recommendations and Preferred Names 2013 (Blue Book), the order of citation of substituent prefixes and the numbering of the corresponding locants are laid down in two different rules.

Simple substituent groups that are named by means of prefixes (such as ‘methyl’ and ‘ethyl’) are arranged alphabetically.

Therefore, the correct alphanumerical order for the compound given in the question is x-ethyl-y,y-dimethylcyclooctane (not x,x-dimethyl-y-ethylcyclooctane).

The locants x and y are used to indicate positions of the parent structure at which modifications represented by suffixes occur. The relevant rules concerning the numbering of locants for substituent prefixes are:

In accordance with Rule (f), the compound given in the question is named as 5-ethyl-1,1-dimethylcyclooctane, not 1-ethyl-5,5-dimethylcyclooctane since the locant set ‘1,1,5’ is lower than ‘1,5,5’. And thus, Rule (g) is not required in this case.

The concise, focused answer to my specific question, which I found before reading any answers here, is as follows: