Why is it possible to form bromoalkanes but not iodoalkanes from free radical substitution?

I understand that the reaction for iodoethane to form from FRS is energetically unfavourable, since the energy released from the formation of a $\ce{H-I}$ bond (from reaction between an iodine radical and an ethane molecule) is only $299\ \mathrm{kJ\ mol^{-1}}$, which is insufficient to compensate the energy needed to break the $\ce{C-H}$ bond to even form the first ethyl radical in the first place for further propagation of the reaction.

However, it is to my knowledge that bromoethane can form from FRS, despite the formation of a $\ce{H-Br}$ bond releasing only $366\ \mathrm{kJ\ mol^{-1}}$ of energy, which is still lower than the $410\ \mathrm{kJ\ mol^{-1}}$ of energy needed to break the $\ce{C-H}$ bond. This doesn't really make sense if the justification for iodoethane is correct.

I would appreciate if anyone could explain to me the reason why bromoethane can form from FRS despite being apparently energetically unfavourable too, thanks!

Now let us look at the energetics of the reaction. The first propagation step is exothermic for fluorine and this explains its extreme reactivity. For the subsequent halogens, it becomes increasingly endothermic from chlorine to iodine. This trend can be explained on the basis of decreasing bond strengths of $\ce{H-X}$ bond. (Data given in the table above)

In contrast, iodination displays a late transition state which is typical of slow,endothermic processes.The activation barrier for the first propagation step is relatively high, in fact it is almost the same as the endothermicity of the reaction. The transition state is not reached till the the carbon-hydrogen bond is almost fully broken, and the hydrogen-iodine bond is fully formed.

These rules about transition states are called Hammond's Postulates, and I encourage you to read about them. 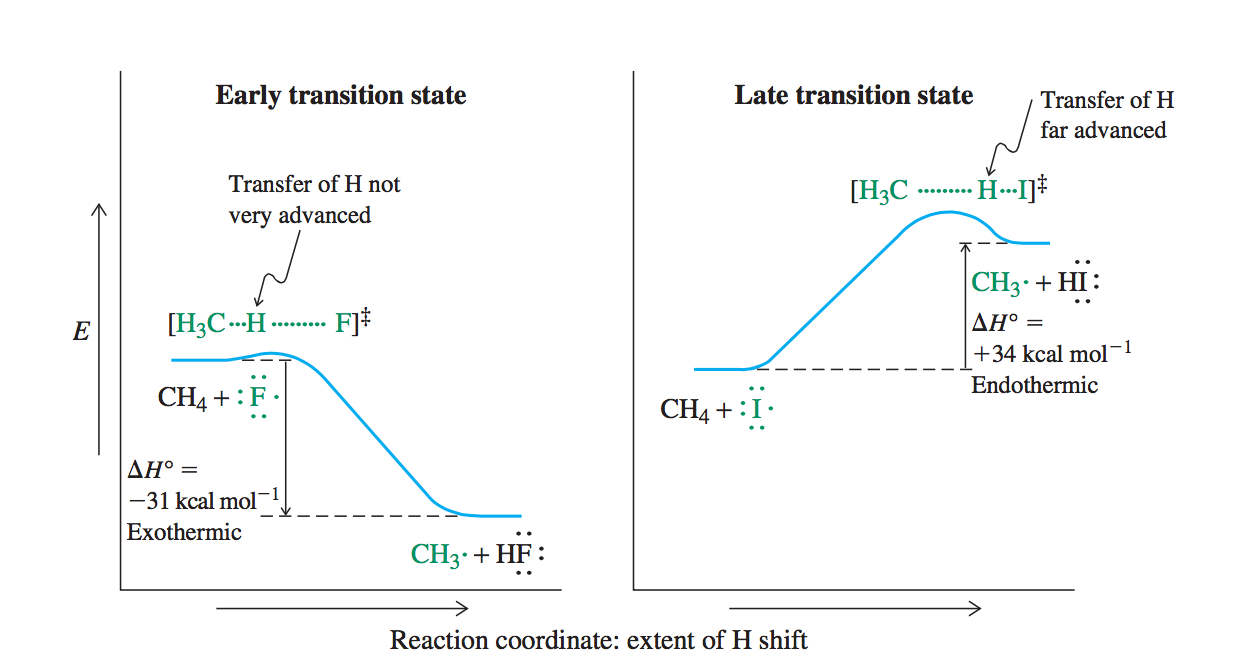 Now, indeed the reason why iodination doesn't proceed is that even though final step is exothermic it doesn't release sufficient energy to compensate for the extremely endothermic first step. Thus, the net reaction is endothermic.

However, it is not the exothermicity of $\ce{H-X}$ bond formation that drives the halogenation reaction, rather it is the energy released upon $\ce{-C-X}$ bond formation (in the second propagation step) that ensures reaction spontaneity. (this can be seen in the data presented in the table)

This is why bromination, or for that matter chlorination can take place.

My apologies, the question asked about iodethane and bromoethane, however, the examples I took up was that of iodomethane (not the first time I have misread a question in my rush to post an answer). However, the ideas presented here still apply

Not the answer you're looking for? Browse other questions tagged reaction-mechanism energy halides radicals or ask your own question.

5
Which C-C bond would break first, the one in ethane, or 2,2-dimethylpropane?
4
Why are tertiary alkyl halides obtained in higher yield than secondary or primary during free radical halogenation of alkanes?
1
Why are higher-energy bonds preferred over lower-energy ones?
1
Why does an increase in Kinetic Energy increase the likelihood of successful collisions?
0
Energy of activation vs Bond energy
3
Deriving rate law from a reaction mechanism for a chain reaction using steady-state approximation
0
How is carbon-halogen bond broken during Finkelstein reaction?