Why can't one make C60 with a combination of hexagons and heptagons?

Well, let's see. This is not quite a chemical question, though I wouldn't recommend moving it to Math.SE either, because they might have hard time recognizing what's $\ce{C60}$.

Now, let's imagine we're considering locally planar conjugated carbon structures. Each carbon has to reserve one $p$ orbital for $\pi$-bonding, which leaves it with 3 bonds. Now, the bonds tend to go in cycles; let's confine ourselves to 5-, 6-, and 7-membered cycles, because otherwise we'll have too much of angular strain (not that other cycles are totally impossible, though). So in effect, we are considering graphs consisting of pentagons, hexagons, and heptagons, with 3 edges meeting at each vertex. Let's say the numbers of these n-gons are $n_5, n_6$, and $n_7$, correspondingly.

That's pretty much the size of it. You can do more or less whatever you want, as long as you have twelve more pentagons than heptagons. There is no going around it.

Now chemistry kicks in, too, and brings its own limitations. An $sp^2$ carbon wants to have its bonds in one plane, at $120^\circ$ angles. You can convince it to budge, but only so much. If you strain it more, the system becomes unstable. It turns out that two pentagons meeting at one carbon is already too much (not for an $sp^3$ carbon, though; see dodecahedrane). That's why you can't have constructions made of pentagons alone (or pentagons and heptagons, for that matter). Geometry would allow that, but chemistry wouldn't.

Let's see how that translates to actual shapes. Several fused hexagons give us coronene; it's planar. 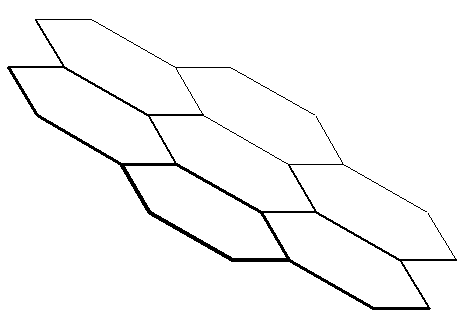 (It is tilted sideways to give it a 3D feel. There are hydrogens attached on the outer edge; I omitted them for clarity.)

Extend it further, and you'll have an infinite flat sheet; that would be graphene.

Throw in a pentagon, and here's corannulene; it's bowl-shaped. 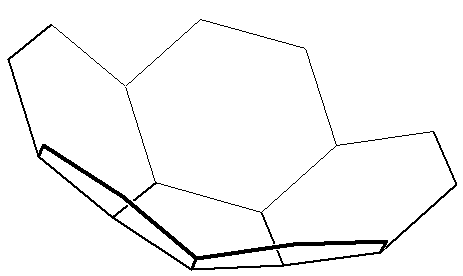 Extend that pattern, and you'll have fullerene. 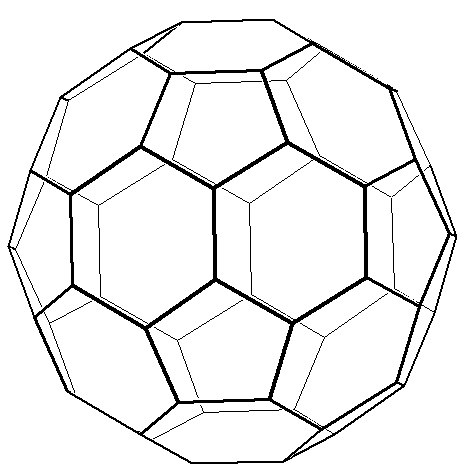 Use a heptagon, and get circulene: 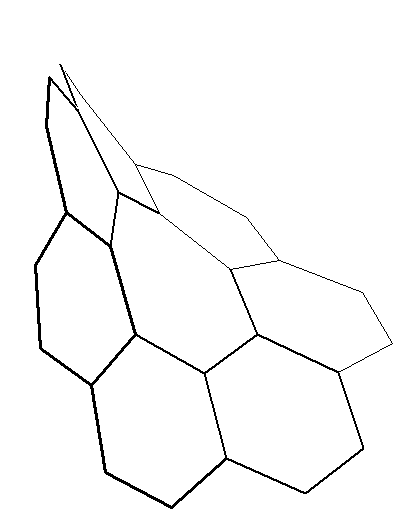 See that? It's bent indeed, but it's bent the wrong way. It's a saddle-shaped bend. An example of negative Gaussian curvature, so to say. You can't wrap it to a sphere, no matter how hard you try.

Can we extend this further? Well, we kinda can (on paper, that is). Moreover, it can be done in a number of ways, some leading to magnificent structures (purely hypothetical, of course). 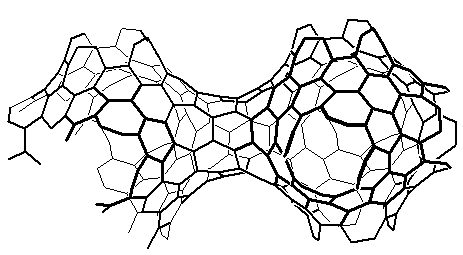 Upd. It was brought to my attention that according to some studies, so-called carbon nanofoam might be a real example of structures of the latter kind. I'm not quite convinced (to me, until you have an X-ray diffraction study, everything is just hand-waving), but let's mention that anyway.

Not the answer you're looking for? Browse other questions tagged inorganic-chemistry molecular-structure carbon-allotropes or ask your own question.

6
Why Cl⁻ can't act as bidentate ligand?
2
Why can't element with paired electron have colour
0
How can one make graphene cables?
0
Why can't oxygen in furan be sp-hybridized?
16
Band gap of fullerenes
0
Why Li can't make it's Peroxide when heated with more O2?
7
Why can't NH5 form?
3
Why does it require so much pressure to create diamonds?