Is diamond transparent to X-rays?

Why is diamond said to be transparent to X-rays? Does this statement mean that X-rays can pass through diamond? If that is the case, then how does one explain this phenomenon?

In reality all electromagnetic radiation tries to pass through everything. Let $\rm I_0$ be the intensity of the beam at the surface and $\rm I_x$ be the fraction that gets through to depth $x$, then:

As a gross generality as the energy of the radiation increases (wavelength shorter) the transparency of matter increases. So a thin slice of carbon, be it graphite or diamond, will stop the vast major of Li K-alpha x-rays, but very few U K-alpha x-rays.

Note with some rearrangements and variable substitution this gives the Beer-Lambert Law used in UV-Vis spectroscopy.

Your diamond will absorb x-rays at all x-ray wavelengths, but the extent of absorption changes, and is far less at shorter wavelengths (or higher energy) than at longer ones. The measured absorption is both due to true absorption and scattering of the x-rays off an atom’s electrons. The 'background' absorption in an atom is due to an electron in an occupied level being excited to a virtual (unoccupied) level. Absorption spectra are typically recoded in the range of approximately 0.01 to 1 nm or 123.9 keV to 1.239 keV respectively.

As pointed out in another answer (@MaxW) the attenuation due to absorption experienced through any material depends in the Beer-Lambert law $I=I_0 $exp$(-\mu x)$ for path length x . The linear absorption coefficient, $\mu$, however, depends on wavelength.

As the wavelength is decreased (energy increase) there is a general decrease in absorption until certain critical energies are reached, then there is a sudden and significant increase in absorption, see figure. (This is a generic sketch and does not refer to any atom) These features are called absorption edges and occur when a core electron is ejected into the continuum as a photo-electron.The minimum energy to eject an electron is the threshold energy, which is equal to the binding energy of the electron. 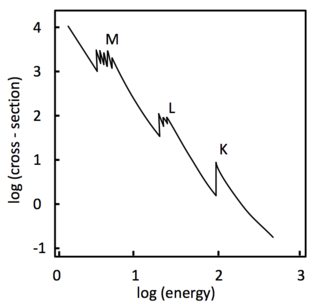 The probability of ejecting an electron is greatest just when the energy is just enough to eject a core electron from the atom. This corresponds to the absorption edge. As this energy depends on the energy levels in each type of atom these edges occur at different energies in different types of atoms. As the atomic number gets larger these jumps in absorption (edges) shift to higher energy but become smaller. For example,$\ce{C \approx 0.28, Al \approx 1.5, Cu \approx 8.9, Pb \approx 88 } $ keV. (This difference means that, in practice, one element can act as an absorber to filter and or isolate another element’s x-ray emission lines. This is particularly true of elements with Z values that are close to one another.)

The highest energy absorption edge is for K shell electron ejection then L and M etc. to lower energies. The K absorption corresponds to ejecting an electron with principal quantum number $n=1$ thus from a 1s orbital ($^2S_{1/2}$) into the continuum. The L absorption ($n=2$) has three closely spaced levels because orbitals with angular momentum (p orbitals in this case) are split in energy due to coupling of electron spin and orbital angular momentum (spin-orbit coupling), the levels are labelled ${^2S_{1/2}, ^2P_{1/2}, ^2S_{3/2}}$ . The M transitions involve $n=3$, involve s, p & d orbitals and are also split.

The absorption here refers to the photoelectric effect when a core electron is ejected and energy is carried away by the photoelectron as kinetic energy. The atom is left in an excited state and the ‘hole’ left in the atom, is very rapidly ($\le 10^{-15} $ s) filled by an other electron moving down in energy and the release of an photon of x-ray fluorescence or of an electron (Auger process).

The attenuation depends on the amount and type of matter traversed, and it is found that absorption coefficient can be expressed as $\mu \approx \rho Z^4 \lambda ^3/A $, where $\rho$ is the density, A the atomic mass and Z the atomic number; $\lambda $ is the wavelength. Thus as $\mu$ depends of density and atomic number it is easy to see why metals show up in medical x-ray images more than does bone or soft tissue.
(The reason for the $z^4$ dependence is that the matrix element for an electric-dipole transition (bound to unbound / continuum) depends on $Z^2$ and the transition probability depends on the transition matrix squared).

If the excited atom is in a molecule, when the photoelectron is released it has wavelike properties, and can be diffracted off electrons in neighbouring atoms causing constructive and destructive interference. This behaviour adds a sinusoidal-like feature on, and just past, the absorption edge (in the direction of higher energy, but to small to show in the figure) and is very useful in determining structure of small molecules when diffraction cannot be used. The phenomena are called XANES (x-ray absorption near edge structure) and EXAFS (Extended x-ray absorption fine structure).

6
Classical reason for good heat conductance in diamond?
0
Structure of diamond
13
Ashes to diamonds --- How?
3
Shapes of ionic compound
0
Classification of oxides,transition elements
29
What is Drago's rule? Does it really exist?
0
Trend in reducing property of dioxides
7
Why is graphite brittle?
3
Why does an mercury ore exist as HgS?