How do sodium-potassium pumps differentiate between sodium and potassium?

I don't know if this should be Biology, but it seems pretty Chem to me.

Does the protein of the sodium-potassium pump tell the difference between sodium and potassium cations based on size, electron affinity, mass...?

$\ce{Na^+-K^+}$ ATPase (more commonly called the$\ce{Na^+-K^+}$ pump) is a transmembrane protein that consists of two types of subunits: The 􏴡1000-residue $\alpha$􏲂 subunit contains the enzyme’s ATP and ion binding sites, and the 􏴡300-residue $\beta$􏲃 subunit facilitates the correct insertion of the 􏲂 subunit into the plasma membrane.

The 􏲂 subunit of this 􏴡$160 \ Å$ long protein consists of a transmembrane domain (M) composed of 10 helices of varied lengths and, and three cytoplasmic domains, namely: the nucleotide- binding domain (N), which binds ATP; the actuator domain (A), so named because it participates in the transmission of major conformational changes; and the phosphorylation domain (P), which contains the protein’s phosphorylatable Asp residue. 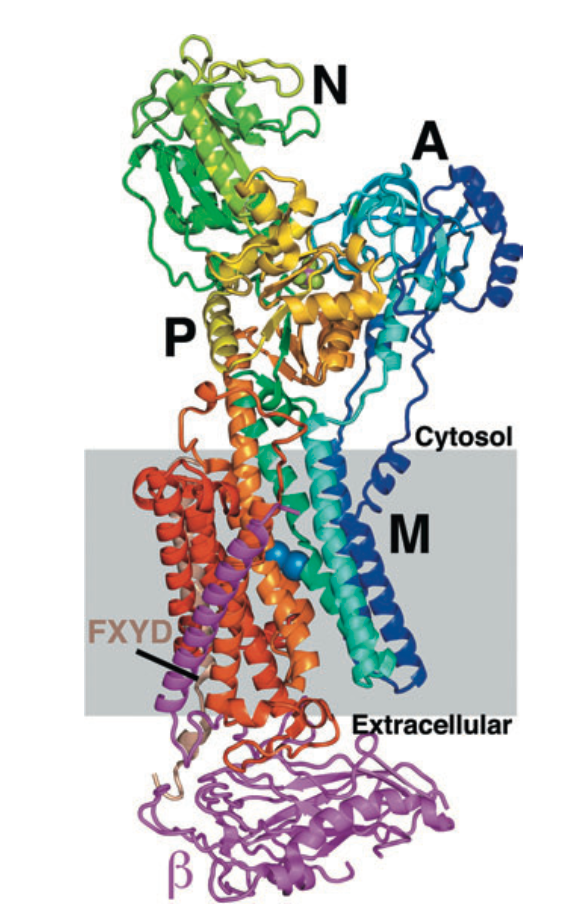 The $\ce{Na^+-K^+}$–ATPase is an antiport that generates a charge separation across the membrane, because for every three positive charges exit the cell for every two that enter.

Outline of the entire process

This enzyme appears to have only one set of cation binding sites, but they changes both their orientation and their specificity during the course of the transport cycle. The difference in specificity the two conformations have arises principally because the two ions differ in size.

The illustration given below, shows the ion binding site in this ATPase and one can easily note the difference in positioning of residues between the two conformations. 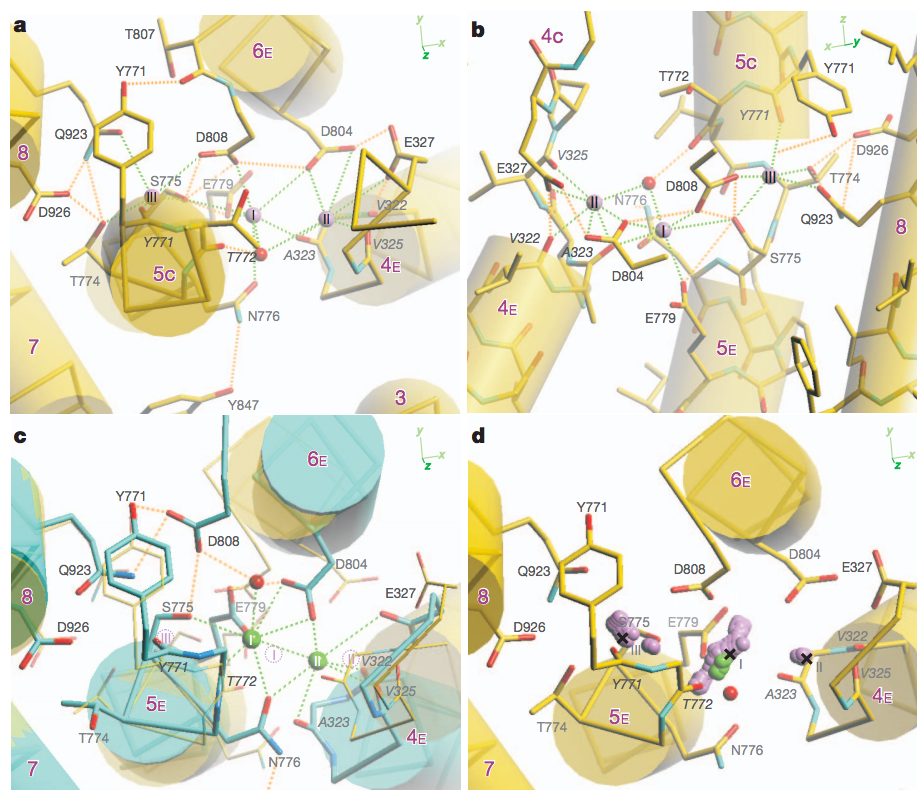 Particularly, I would like to call your attention to figure(s) a, b and c. The purple spheres represent sodium ions, and the green ones correspond to potassium ions. Fig a and b represent the same view of the ion binding site, and one can clearly see the slight positional differences of the residues which account for the difference in specificity.

Your question was answered 3 years ago for first time. http://www.nature.com/nature/journal/v502/n7470/full/nature12578.html

The way it works is essentially Na/K ATPase pump is able to recognize Na over K or Ca2+ due to adopting conformational states that sterically hinder K+ or Ca2+ ions from binding. But a indepth answer lies in the paper cited

15
Help understanding how "steric effects" are distinct from "electronic effects"?

3
How do transmembrane protein alpha helixes bind to the membrane?
2
Gel electrophoresis separates proteins on the basis of what property?
0
Is the solution isotonic, hypertonic, or hypotonic?
1
Does mixing two different foaming soap make it ineffective?
2
How to identify 'water' mistakes in protein crystal structures: Are B-factors and occupancy good indicators?
2
Best description of forces/ mechanisms that stabilize the interaction between a hydrophobic protein binding pocket and a hydrophobic ligand