Carbon is well known to form single, double, and triple $\ce{C-C}$ bonds in compounds. There is a recent report (2012) that carbon forms a quadruple bond in diatomic carbon, $\ce{C2}$. The excerpt below is taken from that report. The fourth bond seems pretty odd to me.

$\ce{C2}$ and its isoelectronic molecules $\ce{CN+}$, BN and $\ce{CB-}$ (each having eight valence electrons) are bound by a quadruple bond. The bonding comprises not only one σ- and two π-bonds, but also one weak ‘inverted’ bond, which can be characterized by the interaction of electrons in two outwardly pointing sp hybrid orbitals.

According to Shaik, the existence of the fourth bond in $\ce{C2}$ suggests that it is not really diradical...
If $\ce{C2}$ were a diradical it would immediately form higher clusters. I think the fact that you can isolate $\ce{C2}$ tells you it has a barrier, small as it may be, to prevent that.

Molecular orbital theory for dicarbon, on the other hand, predicts a C-C double bond in $\ce{C2}$ with 2 pairs of electrons in $\pi$ bonding orbitals and a bond order of two. "The bond dissociation energies (BDE) of $\ce{B2, C2}$, and $\ce{N2}$ show increasing BDE consistent with single, double, and triple bonds." (Ref) So this model of the $\ce{C2}$ molecule seems quite reasonable.

My questions, since this is most definitely not my area of expertise:

Okay, this is not so much of an answer as it is a summary of my own progress on this topic after giving it some thought. I don't think it's a settled debate in the community yet, so I don't feel so much ashamed about it :)

A few of the things worthy of note are:

The real issue is that no one has ever taken a picture (i.e. electron density) of genuine, unambigious, cases of a single, double, triple, quadruple??? bonds. And they never will, because these concepts are not based on quantum mechanics.

Two atoms reside next to each other, and if they have a favorable electrostatic interaction, then a certain type of topology arises in their electron density. (q.v. Quantum Theory of Atoms in Molecules)

You might as well say that every "bond" is a single-bond, or, equivalently, and infinity-bond.

These types of articles are bogus, as they can not be confirmed experimentally. They got lucky with the reviewers, and/or an editor who knows their readership is just dying to hear news of a quadruple bond, having heard for so many years that triple is the highest you can go.

I mean, what are people looking for? Four "ropes" that link between the two carbon atoms? Where is the unambiguous, unbiased dividing line between bond energies of a single/double/triple/quadruple bond?

A recent publication by Chen & Manz (2019) on the bond order of diatomic molecules did touch on this controversy in their discussion. In their study, they have employed a novel method of analysis, which they called Bond Order Component Analysis (BOCA), to quantum mechanically calculate the bond orders of 288 diatomic molecules and ions. They discussed the diatomics $\ce {C2}$, $\ce {Mo2}$ and $\ce {O2}$ in greater detail. The following edited text taken from the publication focuses on their discussion on the diatomic bonding in $\ce {C2}$: 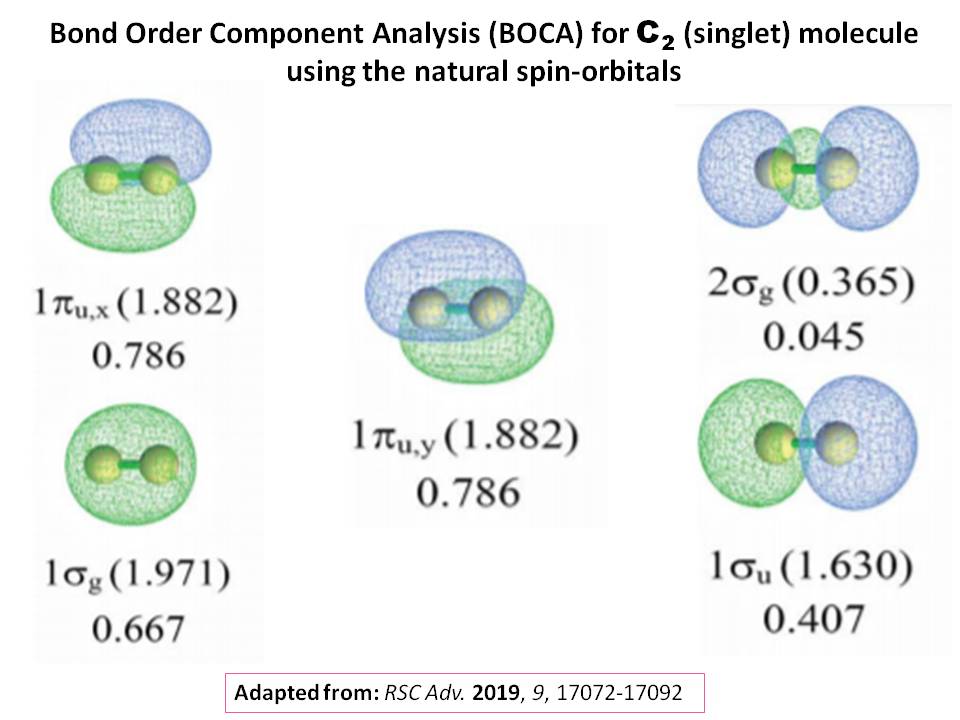 Carbon 100% could form a quadruple bond in C2. Each and every non-noble gas atom is trying to get an outer shell of 8. Diatomic elements are elements that can bond with themselves (the three most common being Oxygen, Nitrogen, and Hydrogen). An acronym to remember the Diatomic elements is H O Br F I N Cl. As you can see, "C" isn't one of them. But, these elements can only bond with themselves because if they do, they get a full outer shell. 2 Nitrogens share 3 electrons with each other, and have 2 left over on each one. 3+3=6+2=8. Carbon has 4 valence electrons and needs to gain 4. It is light enough to be able to form a quadruple bond, and if it does, it will share all four of its electrons with the other carbon! So each carbon will have a total of 8 valence electrons.

2
Can carbon have quadruple bonds?
1
In C2 molecule, both bonds of the double bond are pi bonds. But isn't the rule that there should exist a sigma bond before a pi bond is formed?
36
What would follow in the series sigma, pi and delta bonds?
12
Are there any molecules with delta bonds in their ground states?
19
Why are pi bonds only formed when sigma bonds are formed?
15
Electron density definition of single, double, triple bonds?
3
Why can two carbon atoms not form more than triple bond with each other?
3
How to derive the total number of molecular orbitals based on the given number of atomic orbitals?
5
Only-C chain molecules
3
Can carbon be the central atom of a complex? Can it form a quadruple bond with itself?
See more linked questions

24
Bonding in the phosphate ion
7
Length of C-H bonds in hybridized bonding orbitals
6
Is there any way of representing a dative/coordinate covalent bond?
2
Covalent bonds other then 2-center, 2-electron bonds
2
Bond length comparison between two carbon atoms
4
How to distinguish between carbon-carbon double bond lengths?
7
Do bonding and anti-bonding orbitals exist for ionic bonds?