Indeed, this effect is observed in certain select cases. The effect of spin-spin cross over has been mentioned in this regard. There can be some other effects at play, namely: phase transitions, change in ligand geometry, equilibria between different molecular structure, and change in the number of solvent molecules in the coordination sphere.

Thermochromic behavior can be divided into two main classes: continuous and discontinuous. Some color changes are gradual; as the temperature increases over time, the color slowly changes. This can be due to the breaking or rearrangement of the lattice. This type of rearrangement is also known as continuous thermochromism.

On the other hand, a dramatic change in color can occur at a specific temperature or over a very small temperature range. This is known as discontinuous thermochromism.

I shall attempt to supplement what others have said by providing some illustrative examples. 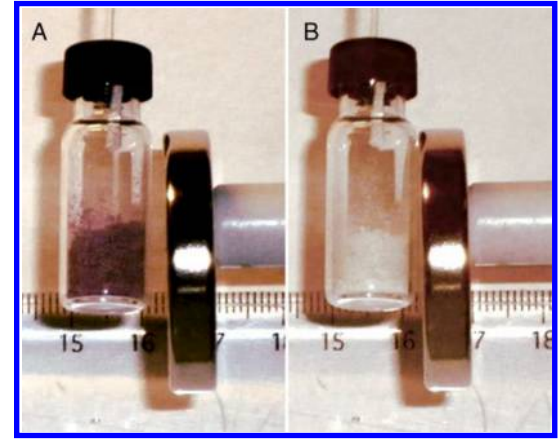 The occurrence of ST in coordination compounds of transition-metal ions is governed by the relationship between the strength of the ligand field (the electrostatic field acting at the central metal ion) and the mean spin-pairing energy. Octahedral complexes of $\mathrm{d}^4$–$\mathrm{d}^7$ ions may be either HS or LS, depending on whether the ligand field strength is weaker or stronger, respectively, than the spin pairing energy.

Thermal spin transition occurs nearly exclusively with coordination complexes of $\mathrm{3d}$ metal ions, because for $\mathrm{4d}$ and $\mathrm{5d}$ transition element compounds on the basis of ligand field theory, because the strength of the ligand field increases considerably, relative to analogous $\mathrm{3d}$ compounds and is generally much greater than the spin pairing energy (hence, these mostly show LS behaviour).

$\ce{Cu2HgI4}$, (and the related $\ce{Ag2HgI4}$) undergo a temperature-dependent order-disorder phase change at ca. $67~^\circ\mathrm{C}$, reversibly changing from a bright red solid material at low temperature to a dark brown solid at high temperature, with intermediate red-purple states. the colours are probably due to $\ce{Cu(I)}$-$\ce{Hg(II)}$ charge-transfer complexes. 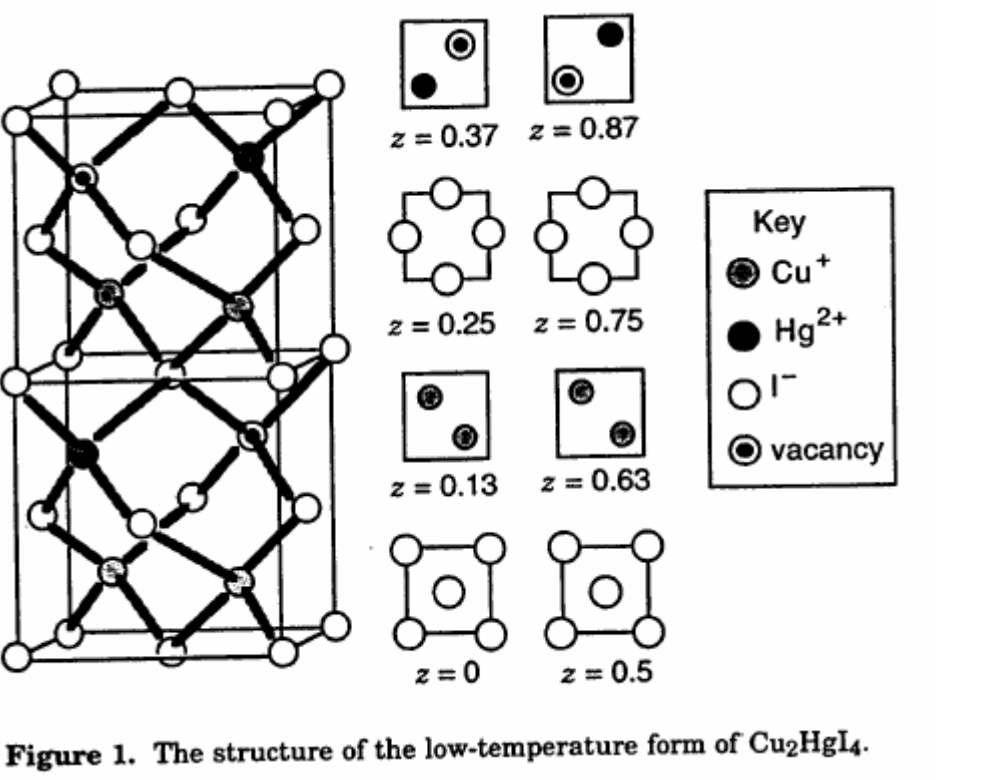 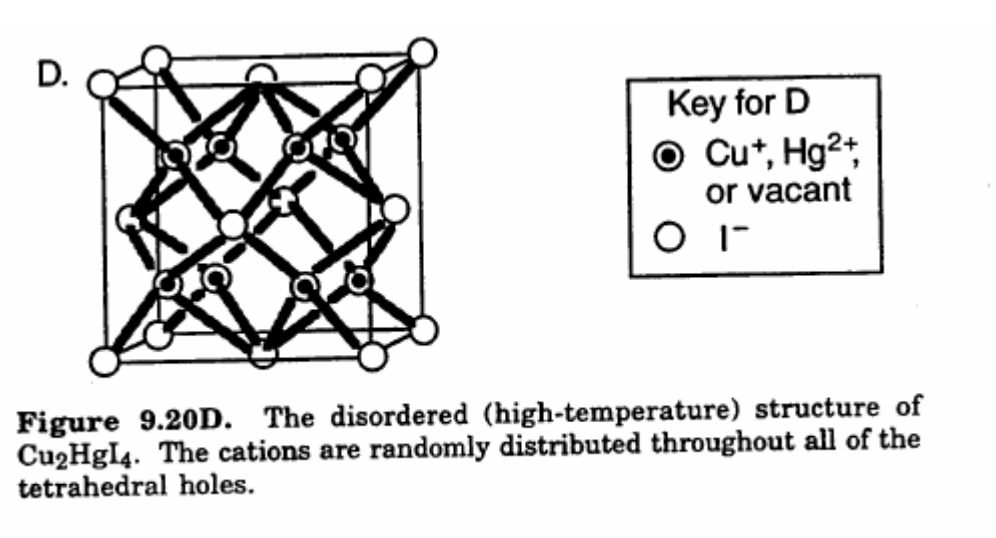 All the metals involved are $\mathrm{d}^{10}$ so one can rule out $\mathrm{d}$-$\mathrm{d}$ transitions, and spin-spin crossover. An electron transfer of some kind might be occurring, especially since the colours observed are so intense. Based on the pi-donating characteristics of iodide, one can also rule out metal to ligand charge transfer. The colour could be ligand to metal or metal to metal charge transfer, although the electron would have to enter something other than the d orbitals.

As the temperature increases and the lattice is rearranged, the $\ce{Cu(I)}$ and $\ce{Hg(II)}$ ions remain in the same environment relative to the iodide ions, but their environment in relation to the other metal ions is changing, and this supports a metal-metal charge transfer explanation for the colour.

At room temperature, this compound is a bright green colour and changes discontinuously to bright yellow at the phase transition temperature.

The thermochromic phase transition in this compound is quite complex Structurally, the salt transforms between two monoclinic unit cells, with three independent $\ce{CuCl4^2-}$ anions in the low-temperature phase and two independent $\ce{CuCl4^2-}$ ions in the high-temperature phase. The phase transition is first order due to the lack of any crystallographic relationship between the two phases.

No simple structural transformation pathway can be envisioned for converting one phase to the other. This accounts for the stability of the supercooled high-temperature phase as crystals of that phase, grown from the melt, can frequently be kept at room temperature for periods of several weeks.The crystallographic study of the high-temperature phase shows the presence of disorder for both the cationic and anionic species in the structure.

At temperatures below ca. $50~^\circ\mathrm{C}$, the four coordinate compound has a square planar geometry even though it is not a $\mathrm{d}^8$ compound, owing to the short hydrogen bonds between the hydrogens of the counter ion, diethylammonium, and the chlorines on the metal compound (this favours the square planar geometry). When the temperature passes the phase transition temperature, the colour changes to yellow because the hydrogen bonds lengthen to (because of the phase transition between the two crystalline phases) and the geometry changes to a distorted tetrahedral The change in geometry changes the arrangement of the d orbitals. 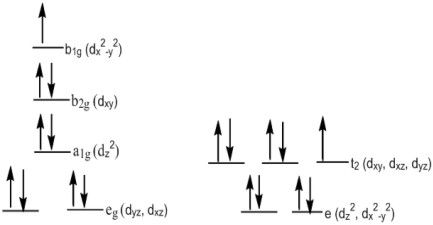 There is no stable intermediate between the square planar and the distorted tetrahedral geometry, so the change is an example of discontinuous thermochromism. Individual clumps of crystals may appear as either green or yellow depending on their exact temperature.

As correctly commented by @orthocresol, there are instances of thermochromicity for transition metal complexes, but it is rather seldom.

It may occur provided the molecular orbitals of the complex are filled partially only, such that you may shuttle between low- and high-spin state, and if the energy provided by heating is suffient to provide the necessary energy to pass the activation barrier. This is then called spin switching. Some of the complexes of iron(II) are examples for this, and this open access article, beside the more senior (behind paywall) here may shed some light on it.

Another example of complex compound showing thermochromism is a complex of copper iodide and pyridine known as copper(I) pyridine iodide cluster complex.

The complex has a tetrahedral tetrameric structure with a Cu4I4 cube in it’s middle and 4 pyridine ring surrounds this little cage. This crystalline solid shows a bright yellow fluorescence at room temperature and an equally intense blue-violet fluorescence when cooled in liquid nitrogen. 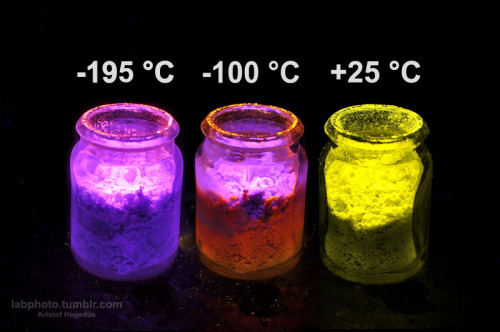 This behavior is based on the temperature-dependent shift of the same band in the emission spectrum, often due to a change in geometry. This video beautifully explains the thermochromism of copper(I) pyridine iodide cluster complex.

Not the answer you're looking for? Browse other questions tagged coordination-compounds transition-metals temperature color or ask your own question.

2
Thermochromic pigment that changes at around 50 °C / 120 °F?
7
Color of Anhydrous Transition Metal Salt
3
How does complex ion differ from ligand complex?
15
Why is anhydrous copper(II) sulfate white while the pentahydrate is blue, even though both have one unpaired electron?
7
Why does heating transform the aquacomples of slightly acidified cobalt(II) chloride solution to the chlorido complex?
1
Does a complex that has no overall charge still have color?