Why can't pure water conduct electricity since it can be reduced at cathode and oxidised at anode?

Indeed, water can conduct electricity by electrolysis. But this is hampered by the fact that water has very high resistance. From Electrolysis of water:

And from Self-ionization of water we can see how small it is:

Pure water has a very high resistivity, on the order of 18 MOhm/cm. This effectively means that any applied potential is going to be converted into thermal energy.

A side note, oxidation of an $\ce{HCl}$ (or any salt with chloride ions) solution will produce $\ce{Cl_2}$ gas, so electrolysis of these solutions should be performed in a well ventilated area.

We take cathode and H3O+ ions as an example. Initially near the cathode surface water molecules can be dissociated into H3O+ and OH- ions. H3O+ ions obtain electrons from cathode leading to hydrogen evolution; while newly-generated OH- ions can only transport very slowly through the bulk solution by slow diffusion or hopping process. These lead to local OH- ions accumulation (so that the solution near cathode turns alkaline) especially at the cathode surface, reducing the reaction rate of hydrogen evolution and thus water splitting. In other words, the reaction becomes very slow or even self-limited, showing a large equivalent resistance between the cathode and the anode. That is why pure water in macrosystem cannot be split efficiently.

In pure water, when the counter-electrode is placed within the Debye-length, double layer regions of the cathode and the anode are overlapping with each other so that high electric field exists in the entire gap. Still at cathode, newly-generated OH- ions can be migrated rapidly from cathode towards anode due to large electric field in the entire gap. When the gap distance is small enough, initially the transport rate can be even higher than the electron-transfer rate. Once OH- ions are generated, they are immediately drawn from cathode to anode, leading to such OH- ions waiting for electron-transfer at the anode, rather than accumulated at the cathode. In this way, the whole reactions would continue even in pure water, but now are limited by electron-transfer. 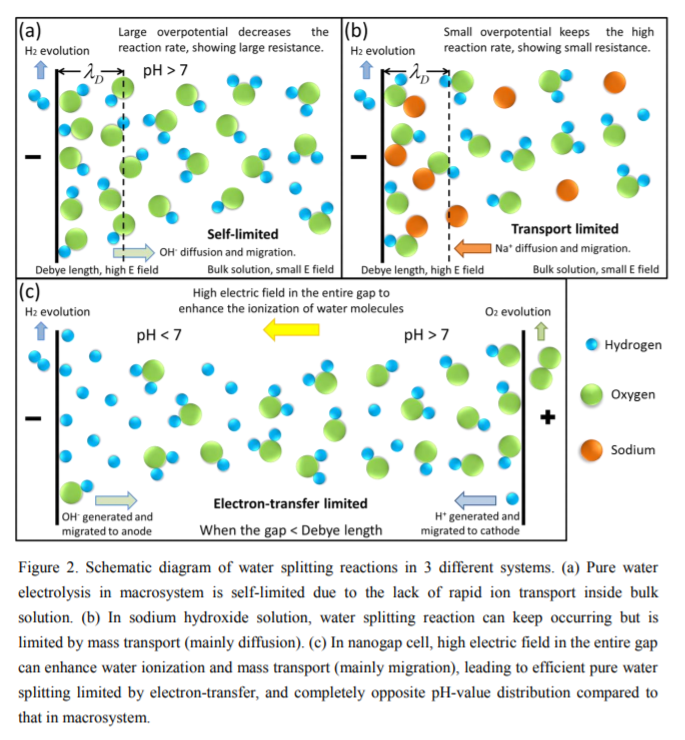 Pure water does not conduct electricity because there are no suspended particles of metals such as Iron and Copper. Pure water also has lack of zinc. Ions are even not present in pure water. We can make water conductive by adding drops of Sulphuric Acid.

Pure Water can't conduct electricity because it has no free ions. But when water is contaminated, it increases the ionic level of it(then its no longer a pure water)-that's why you see waters conducting electric current and you got electrocuted by it.

Not the answer you're looking for? Browse other questions tagged water electrolysis or ask your own question.

18
EZ-Water - Fraud or breakthrough?
2
Why does the anode solution contain Sn2+ in a Sn-Cu voltaic cell?
1
Why doesn't pure water conduct when it dissociates?
2
Can solutions of polar covalent compounds conduct electricity?