Why do salts such as NaCl dissolve?

If we look at solubility of salts in water, we are told that they disassociate, because the positive $\ce{Na}$ ion is attracted to the partially negative oxygen in water and the negative $\ce{Cl}$ is attracted to the partially positive hydrogen. But why does this happen? I mean, the couloumb force should be much stronger between the $+1$ and $-1$ charges on the $\ce{Na}$ and $\ce{Cl}$ than the partial charges on the polar water molecule. Why does $\ce{NaCl}$, then, disassociate? It would make much more sense for the two ions to stick together.

Also, when you cut $\ce{NaCl}$, shouldn't it stick to its pieces? Look at salt crystals: they don't have any force of attraction between them. But, if you have positive sodium ions and negative chloride ions, then they should stick together.

As it happens, the enthalpy of solution of $\ce{NaCl}$ in water (that is, the energy change associated with the dissolution of sodium chloride crystals in water) at standard conditions is very slightly positive, i.e., it is an endothermic process. At a constant temperature and pressure, these kinds of thermodynamic processes are dictated by the change in Gibbs free energy, described by the equation

Where $\Delta G < 0$ is a necessary criterion for a spontaneous process. Given that $\Delta H$ is positive, $\Delta S$ must be positive as well, otherwise the process wouldn't occur spontaneously (which is to say, not without input of work from the surroundings, or coupling to some other strongly favorable reaction, neither of which is the case for the dissolution of salt). In other words, this is a process that is driven by the increase in entropy, which is entirely to be expected when moving from a highly ordered state (i.e., a crystalline solid) to a less ordered liquid solution. Indeed, in ideal solutions, where intermolecular forces of attraction are taken to be equal between all components, enthalpy change is necessarily zero, and entropy is always positive, so that the process of mixing in ideal solutions is always spontaneous. Of course, in real solutions, this is not the case.

Your intuition that the Coulombic forces between ions should be stronger is correct in this particular instance, as indicated by the positive enthalpy (meaning, the breaking of ionic bonds in the crystal lattice, as well as intermolecular bonds between solvent molecules, requires more energy than is released in the forming of ion-dipole bonds). The input of energy required for this process comes in the form of heat, drawn from the solvent. However, there are numerous examples of salts for which the enthalpy of solution is negative under a wide range of conditions.

The statement "[l]ook at salt crystals: they don't have any force of attraction between them" is inaccurate, though. In fact, there is strong ionic bonding. The very fact that the crystals remain solid except at very high temperatures is sufficient evidence of this, and the strength of the bonding in the crystal lattice can be quantified by calculating the lattice energy. It's a mistake to consider any substance in isolation. When you talk about "cutting" $\ce{NaCl}$, what you're talking about is applying physical force to the crystals, exposing them to the complex mixtures of gasses and mositure in the air, and bringing them in contact with, say, the metal in the knife. If left in relative isolation, the salt remains undisturbed, packed in a crystal lattice. A gas, however, which has weak forces of attraction between individual particles, will expand to fill a container without any work being done to it (at least as far as atmospheric pressure allows). A liquid will experience capillary forces, either climbing the walls of a narrow container, resulting in a concavity at its surface, or pooling away from the walls of the container, resulting in a convexity at its surface (which of the two happens depends mainly on the comparative strengths of the forces of attraction between the molecules of the liquid and those of the substance comprising the container).

In an ionic crystal the ions are held together by Coulombic forces, which are of long range and have a $1/r$ distance dependence. To determine the accurate binding energy in a crystal all interactions with other ions have to be accounted for, not just nearest neighbours. This is a standard calculation the most difficult part of which involves finding the Madelung Constant for the particular crystal.

At the surface of the crystal the interactions are far smaller than the bulk as these molecules/ions are in contact with only half of the crystal's ions and they also interact with the solvent. To estimate the solubility, the Coulomb energy of separating two ions to a distance r in a solvent of dielectric constant (relative permittivity) $\epsilon$ is calculated. This energy is $$w =\frac{z_1z_2e^2}{4\pi\epsilon_0\epsilon r}$$ where $\epsilon _0$ is the permittivity of free space, e the electronic charge and $z_i$ the charge on ion i and the energy at $r=\infty$ is taken to be zero.
The Coulomb law is not really valid at small separations, because of the molecularity of the medium makes the continuum assumption, in terms of the dielectric constant, to break down. Nevertheless it does give an insight, albeit, approximate into solvation.

The free energy for separating two ions with radii $r_+$ and $r_-$ is thus $$\Delta\mu \approx \frac{+z_1z_2e^2}{4\pi\epsilon_0\epsilon (r_+ + r_-)}$$ which is positive since the coulomb interaction will always be negative for combining opposite charges.

In water the mole fraction solubility of NaCl is $0.11$ which is a larger than the calculated $X_s =0.08 $, but not by much considering the simplicity of the model.

The last equation has the general form $$X_s = exp(-C/\epsilon)$$ where $C$ is a constant depending on the ion pairs and temperature. Thus a plot of logarithm solubility (as mole fraction) vs. reciprocal of dielectric constant for the same ion pairs in different solvents should give a straight line. The plot below shows data for NaCl in different solvents, the approx relationship is borne out. Because of the reciprocal nature of the ionic radii in the equation, larger ions should generally be more soluble than smaller ones. 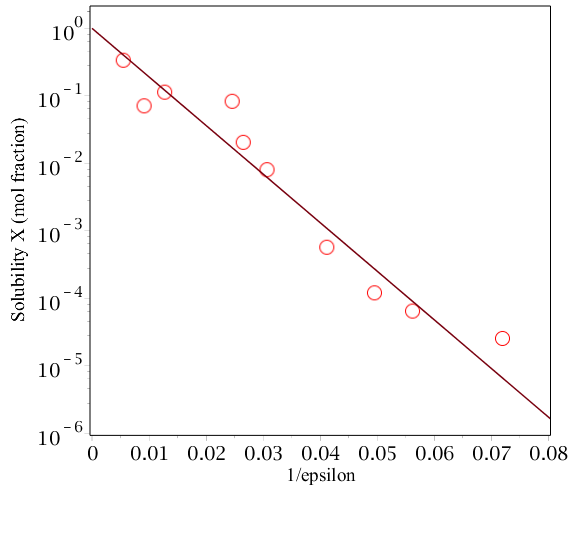 The huge range of solubility is quite dramatic, and shows that the main effect on solubility is due to the solvent dielectric constant $\epsilon$. You can appreciate this from the Coulomb law. The electric field around an ion is effectively 'quenched' in a high dielectric meaning that the interaction energy decreases rapidly with distance. Thus an ion effectively becomes isolated from all others and is surrounded only by solvent dipoles. In a low dielectric the electric field of the ion and spreads out to a far greater distance (in the ratio of dielectric constants which could be 20 times larger), thus one ion can 'feel' the effect of others nearby when they diffuse close to one another and if they are attracted then they can coalesce to form an ionic molecule, and thus are no longer soluble.

Why split crystals do not attach to each other?

The answer is because the distance between the atoms can not be restored to initial distance as it was in crystal lattice. As you might know there are repelling and attracting forces acting on the atoms of solid matter. The attraction forces are very rapidly decreasing with greater distance +2-3 radii of molecule, ion etc and they are gone. Two pieces of materials can not be put back together simply by pressing because also there are molecules of air that fill in the space between the two pieces. Those molecules are decreasing the effective area of the contact since they are simply in between. The effective area of a contact are number of ions approached each other for the intermolecular/ion attraction.

During any kind of deformation the molecules and atoms reorganise themselves slightly so if you put the pieces as it seems to you exactly to the same location where they were before the atoms are not any more at the same place, they have changed their position. That is another reason why the pieces do not stick to the same original piece.

6
Why doesn't a fractured salt crystal stick back together?
2
Why does NaCl dissolve in H2O despite its strong ionic bond?
1
How do hydrogen bonds break the ionic bonds of a crystal lattice?
4
Why Ionic compounds dissolve into water
-4
How is the dichromate anion generated from potassium dichromate?
0
Why does Fluorine have a high affinity for Calcium?
1
What type of bond forms between an ionic compound solute and a polar solvent
1
How do ion–dipole bonds manage to break apart an ionic lattice?

4
Why Ionic compounds dissolve into water
2
Are Na and Cl ions from NaCl in water separate charged particles?
20
Why is an ionic bond a chemical and not a physical bond?
0
Dielectric constant and dissolution of ionic salts
6
Why does helium have such a low van der Waals coefficient but not as low a Lennard-Jones coefficient?
2
Would ionic conduction be halted by shielding at the electrodes?
4
Can two noble gases attract each other?