So the structural formulae I've seen have two double-bonded oxygens directly attached to the U and each formate group is attached by single bonds to the oxygens. Like this. The empirical formula for the dry powder is written as a monohydrate.

Can someone explain how this thing gets solvated in water and what the solvated ions are, exactly? I just realized I was assuming it dissociates into a 'uranyl' ion (whatever that looks like) and two formate ions$\ldots$but then I'm confused about where the formate's oxygen goes.

This is a uranyl ion, one of the most common forms of dissolved uranium:

Because the two U=O bonds can form a single delocalised region, there's a strong tendency towards linearity (c.f. carbon dioxide). It tends to dissolve in water by gaining equatorial water ligands (4 or 5), some of which it may then hydrolyse, depending on the pH: 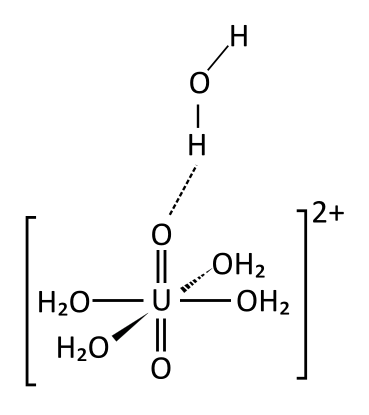 The difficulty in dissolving uranyl formate in particular suggests that the formate ion is quite well-bound, and it seems that in this case you get a combination of water and formate ligands in the complex around the uranyl. I was expecting the formate to be a bi-dentate ligand, but according to the results of a combined computational and experimental study 1, it's uni-dentate (which incidentally allows it to form polymeric chains in solution).

Here's a picture from that study showing a computationally obtained structure of a mixed water/formate-ligated uranyl structure.

Not the answer you're looking for? Browse other questions tagged inorganic-chemistry reaction-mechanism structural-formula or ask your own question.

10
Oxidation of formate ion by peroxydisulfate in water solution: Why are there "strange" kinetics?
8
Changing iron(III) acetate to iron(II) acetate
5
Computing reaction mechanisms using solvation effects
2
Why is sodium acetate a good nucleophile?
3
Regenerating a Cobalt Acetate Catalyst
2
Reference request on formate potash process
7
Meaning of the term "vertex" in the topic of skeletal formulae
1
Problem with synthesis of calcium formate
2
Which is a dye: Ferric Acetate or Ferrous Acetate?