What is antisymmetric exchange? What is J-strain? Where does it come from?

I'm reading a paper1 by Sanakis, et al. that characterises the magnetic coupling in the $\ce{Fe3S4}$ clusters present in bacterial ferredoxin II and beef heart aconitase as arising through something called 'antisymmetric exchange'. This looks like it may be a result of the apparent magnetic frustration of the system (three high-spin $\ce{Fe^{3+}}$ ions, all in essentially identical environments, all antiferromagnetically coupled with respect to their neighbours). The paper says that the clusters have a S=1/2 ground state, which is incompatible with a broken-symmetry model.

The wikipedia article on antisymmetric exchange (all four sentences of it) is not particularly edifying. I'm hoping an expert can explain what antisymmetric exchange is and what causes it as I've not heard of it be before. The paper also notes that the exchange situation in the cluster gives rise to three slightly different $J_{ij}$ values (again, despite the symmetry of the ions) and terms this 'J-strain'. This makes me doubt that, for instance, 'antisymmetric' is being used as a synonym for 'antiferromagnetic'.

Here's an example of the general connectivity of this kind of $\ce{Fe3S4}$ cluster (based on D. Gigas FdII (PDB entry 1F2G)). The cluster comprises a hemicubane. $\ce{S_{Cys}}$ denotes a cysteinyl sulfur. 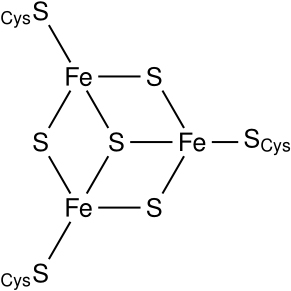 Maybe OP has already contacted the authors of this paper by now, but this was interesting. I'm no expert but I can Google things and this was too long for a comment.

Antisymmetric exchange: At first I thought it was simply an exchange interaction where the wave function's sign is changed during exchange, now I don't think it's so simple.

Antisymmetric exchange is also known as DM-interaction (for Dzyaloshinskii-Moriya). I don't know exactly what it is, here is the original paper citation - can't find it anywhere though.

A slideshow, which contains some more info (slides 16-23)

J-Strain: Reading this, "J-strain" isn't the only "strain" that's referenced in this paper. Also referenced within is "G-Strain" which has a more elucidating Wikipedia article.

So, maybe it's safe to say, like G-Strain, J-strain is the broadening of the "distributed exchange coupling constants" (a.k.a. J-values). Inferred from a line in the paper: "Both proteins exhibit distributed J-values (J-strain)".

What did J-strain have to do with the experiment? "...The observed J-strain, which presumably represents a distribution of protein conformations “locked in” upon freezing the samples."

Where does the broadening of the J-values (exchange coupling constants) a.k.a. J-strain come from? Well apparently there's this thing called J-coupling that seems relevant. J-coupling is also known as indirect dipole-dipole coupling, and gives info about molecule interconnectivity. J-coupling relates nuclei to local electrons (All this is from the J-coupling article). The broadening of the lines may come from anisotropic interactions, which affect nuclear spin energy levels. Sure enough, the paper says it can't rule out anisotropy. An Alternative source? Non-homogeneous regions in the sample, which could go back to the frozen/locked conformations.

I still think it'd be great if someone doing physics research in this field could elucidate some more though.

Another J-coupling Webpage (U. Wisc)

Of course I should cite the original paper, "Evidence for Antisymmetric Exchange in Cuboidal [3Fe−4S]+ Clusters". Linked in question.

This is about the spin Hamiltonian of the system, and more like naming an empirical observation then giving an actual physical explanation.

So in the most simple (regular) spin systems a Hamiltonian with H=JS1S2 where J is a scalar handles pretty well the behaviour os spin. Note, in this case there is no orientation preference for the coupled spin compared to any internal axis, e.g. ligand orientation or such, only tells if S=S1+S2 or S=S1-S2 is more stable (i.e. ferro or antiferromagnetic material). Sometimes there is a preference of orientation of S1, S2.. compared to local molecular axis, eg. S1 prefers to align with the local z axis. You can models this with the zero-field splitting, i.e. you have a DS1^2 .. type of Hamiltonian in addition. Now asymetric exchange is a contribution when the exchange interaction has a directional preference, i.e. JS1S2 with scalar J is not enough as it would be fully anisotropic. While in your system there is a magnetic frustration, the reason for asymmetric exchange is relativistic effects similar to zero-field splitting. There are low energy excited states that mix into the ground state due to strong spin-orbit coupling. Since iron(III) doesn't have such states, I guess it is coming from the extra electron of iron(II). But it is just an uneducated guess. I think it is nothing to do with the spin-strain (that exist with simple JSS coupling, too), it is just the strain makes it easier to observe.

Note, that the spin-Hamiltonian model is just an empirical parametrisation of the behaviour of the spin (e.g. description of the EPR or in-field Mossbauer spectra). Frankly speaking, it is very rare to see someone making out any physical / chemical information out of it. I would read more of Munck/Bominaar group's later papers, as they often put some theoretical model (DFT and ligand field) behind their measurements.

Not the answer you're looking for? Browse other questions tagged physical-chemistry spin magnetism or ask your own question.

30
What is the exchange interaction?

4
Where does this equation for the activity in the gas phase equilibrium between N₂, H₂ and NH₃ come from?
9
Where does the molar mass difference between N₂ and CO come from?
4
Where does the energy of formation of covalent bonds come from?
5
Equilibrium concentration, where does the 5.00 for iron thiocyanate complex come from?
7
"Hamiltonian operator has no effect on the spin function" what does it mean?
6
How can hydrogen and oxygen coexist in high temperature? Where did the oxygen come from?
2
What does "spin degeneracy" mean in this context?