Won't the net effect of a catalyst be zero if it creates a new path with lower activation energy?

I am assuming it might have something to do with the reactants having a higher energy than the products, but I can't think up a proper formal reason that a catalyst has a net benefit for the forward reaction. 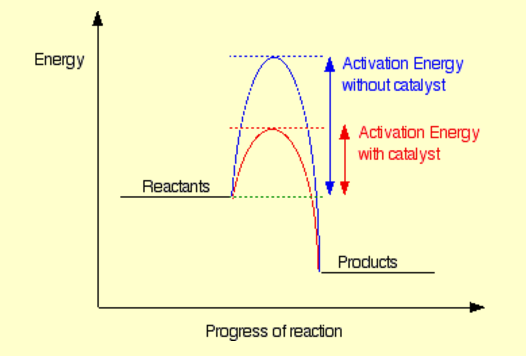 Your realisation is correct and something chemistry teachers try to hammer into their students’ heads time and time again (and yet, the point is still often lost):

Catalysts will never change the thermodynamics of a reaction. They only ease the path of the reaction. Forward and backward reactions will be accelerated equivalently.

So what is the benefit of a catalyst? There are multiple ones.

Take for example the Haber-Bosch process to synthesise ammonia from nitrogen and hydrogen.

This reaction is exothermic and thus should, theoretically or thermodynamicly, proceed spontaneously, e.g. if you mixed nitrogen and hydrogen in the appropriate ratio and added a spark. It does not, however. Significant activation energy is required to cleave the $\ce{N#N}$ triple bond.

Typical methods to add activation energy include heating. In the Haber-Bosch process, the mixture is heated to $400$ to $500~\mathrm{^\circ C}$ to supply the required activation energy. However, since the reaction is exothermic, heating will favour the reactant side. Increasing the pressure improves the entropic term of the Gibbs free energy equation, hence why pressures of $15$ to $25~\mathrm{MPa}$ are used.

Catalysts, based on iron with different promotors, are used to accelerate the reaction. By using catalysts, one can lower the temperature required in a trade-off between speed of reaction and favouring the product side of the equilibrium. With the conditions and catalysts used, one achieves a yield of $\approx 15~\%$ of ammonia within a reasonable timeframe. Not employing a catalyst would give much lower yields at much longer timeframes — economically much less feasible.

This is mainly true for many transition-metal catalysed carbon-carbon bond formation reactions, but is also true for some inorganic processes like the disproportionation of hydrogen peroxide as in equation $(2)$.

Hydrogen peroxide is a reactive chemical that cannot be stored forever, but the direct disproportionation path is not typically what degrades it. However, you can add $\ce{MnO2}$ to it. Upon addition, oxygen gas vigourously bubbles out of the solution. In this case, there was a kinetic barrier impeding the direct transformation due to reactants and products having different multiplicities (oxygen gas’ ground state is a triplet, all others are singlets). The $\mathrm{d^3}$ ion manganese(IV) is a radical itself that can partake in different radical reactions, allowing the diradical oxygen to be liberated.

This is exceptionally true for transition-metal catalysed organic carbon-carbon bond formation reactions. Note first that the action of a catalyst is frequently depicted as a catalytic cycle: A reactant reacts with the catalyst to some intermediate species, this rearranges or reacts with other reactants/additives/solvents in a set of specific steps until finally the products are liberated and the catalytic species is regenerated.

Many such reactions require organic halides as one of the reacting species. And the first step is typically an oxidative addition as shown in equation $(3)$, where $\ce{X}$ is a halide ($\ce{Cl, Br, I}$).

Palladium typically prefers oxidatively adding to bromides or iodides and tends to leave chlorides alone. I myself have performed a reaction with near-quatitative yield in which a reactant contained both a $\ce{C-Br}$ and a $\ce{C-Cl}$ bond — selectively, only the $\ce{C-Br}$ bond took part in the palladium(0) catalysed Sonogashira reaction.

Although I did not try it myself, I am pretty sure that switching to a nickel(0) catalyst species would shift the reaction in favour of reacting with the carbon-chlorine bond rather than the carbon-bromine one.

This is basically a reiteration of the first point albeit with different intentions. Many a time in organic synthesis, one has a rather sensitive reactant that would degrade or undergo side-reactions if subjected to standard reaction conditions, such as high pH-value or elevated temperatures. As an example, consider a transesterification as shown in equation $(4)$.

This reaction is, of course, an equilibrium and by using methanol as the solvent we can shift it to the product side. For the reaction to happen, one would need a base strong enough to deprotonate methanol, giving the methanolate anion, which can then attack the ester functionality. However, methanolate being a strong (and nucleophilic) base itself can introduce undesired side-reactions, including epimerisation of the α-carbon.

One can catalyse this reaction by using $\ce{Bu2SnO}$, which will activate the carbonyl group, making it more susceptible to a nucleophilic attack. The reaction speed is the same but the conditions are milder (no additional base required) and the number of side-reactions is those strongly limited. In particular, I noticed no epimerisation of the α-carbon in the tin(IV) catalysed method.

Yes, one expects both forwards and backward reactions to speed up as you suggest; there seems to be no reason why microscopic reversibility would be suspended.
The point of the catalyst will be to speed up a reaction so that it can happen on a reasonable time-scale, say hours not days or even years, and also (industrially) to use less energy to do the same reaction.
The back reaction will still be slower vs. forward reaction as the activation energy to return to products is still larger and so the equilibrium could still be greatly in favour of products. If this were not the case, either the products could be physically removed (say by precipitation, or escaping as gas/vapour) or they could react with something else, as in an enzyme, then the rate of the back reaction becomes far less significant.

I think the fundamental point here is that a constant reduction in one constant matters a lot more than the other, e.g.:

Yes, you reduced both barriers by $0.5$ units, but you still increased the rate by almost $2\times$.

In fact, a lot of the qualitative explaining away done by chemistry classes is only rigorously understandable if you start doing the math.

Not the answer you're looking for? Browse other questions tagged equilibrium catalysis or ask your own question.