When should we not draw a Lewis dot structure?

My friend once told me that technically , we should not draw Lewis dot structure of molecules containing no central atom.(eg.benzene,acetic acid) Is he right ? If yes, then what is the reason behind this ?

Short answer: no, there's nothing preventing you from drawing arbitrarily complex molecules according to the conventions of Lewis dot structures. They are not special, and the rules for drawing them are settled by convention and have evolved since they were first developed in Lewis's original paper. They're just one type of diagrammatic rendering of molecular structure which (probably due to their simplicity and explicitness) has caught on in pedagogy. They don't see much use beyond that. Read on for further details.

It's worthwhile to precisely define our terms here. The IUPAC Gold Book provides the following definition for a central atom:

By that definition, the term is reserved almost exclusively for coordination complexes with a distinct metal atom at the center and ligands bound to it (with some exceptions for purely molecular Lewis adducts, e.g., amine oxides), where the electrons of the bond(s) originate on the ligands, rather than each atom donating an equal number of electrons in the formation of the bond(s). For non-coordinate covalent bonds, if the bonds were to be split homolytically (i.e., such that an equal number of electrons are distributed to each atom), the result would be separate, neutral atoms. Were coordinate covalent bonds to be split this way, that would not be the result.

Obviously, that definition is highly limited, and it's not the prevailing definition in my experience. The other usage of the term is essentially to refer to any non-terminal atom (i.e., one that has two or more bonds to separate atoms). There's nothing inherent to Lewis structures that prevents them being used to represent molecules containing multiple such central atoms. They're simply one representation of bonding. In practice, they don't see much use, chiefly because they're substantially less economical than condensed structural formulas or the skeletal bond-line structures (introduced in their prototypical form by Kekule), and because pure Lewis dot structures, as they were originally conceived, are exceedingly poor at representing stereochemistry.

Lewis dot structures are rhetorical devices to understand bonding and molecular structure (using the VSEPR model). Any molecule can be drawn using a Lewis dot structure if it helps you correctly draw the structure. Often molecules (especially large molecules) are not drawn with Lewis dots to de-clutter.

Adding to GregE's answer, one particular class of molecules where a Lewis diagram could be deceptive are resonance structures. In such molecules, there are multiple valid Lewis diagrams because the actual bonds are delocalized, meaning that the electrons are free to roam over several bonds. One of the most vivid examples of resonance is benzene.

Here are some representations of benzene from the wiki (licensed under Wikimedia Commons): 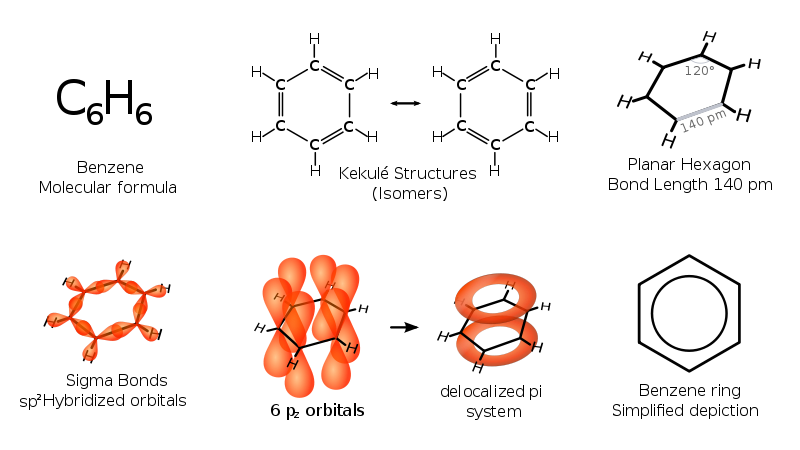 Now look at the diagram in the middle of the top row. It shows that there are two Kekule structures, which could be rendered as Lewis diagrams easily. But the reason you need both is because the double bonds shown between the carbons are notional: there is no reason why either structure is preferred. And the reality is that a benzene molecule is more like the "average" of the two structures. The bottom row shows various representations showing the delocalized electrons, and all of these are "better" than the static Lewis or Kekule diagrams. But the Kekule diagram is a lot easier to write down, and any chemist will understand that resonance is involved.

Not the answer you're looking for? Browse other questions tagged homework structural-formula or ask your own question.

1
How should I identify my leaving group in SN1 reactions if there might be more than one option?
1
How to draw Lewis dot structures?
2
Nucleophiles and Electrophiles
18
Can ozone have a triangular structure?
1
How to calculate the concentration of all relevant species in a buffer of a given pH?
4
Lewis structure of diazomethane
3
Dissociation of benzoic acid
2
Number of resonating structures (hypothetical)
16
What is the correct way to illustrate a bond to something irrelevant in a structural formula?