Why is the ionic radius of Al(3+) smaller than that of Li+?

I was examining the ionic radii of some ions from this site for a school assignment. I noticed a weird anomaly in the ionic radius of $\ce{Li+}$ as compared to that of $\ce{Al}^{3+}$.

As the below picture suggests,(taken from the same post). 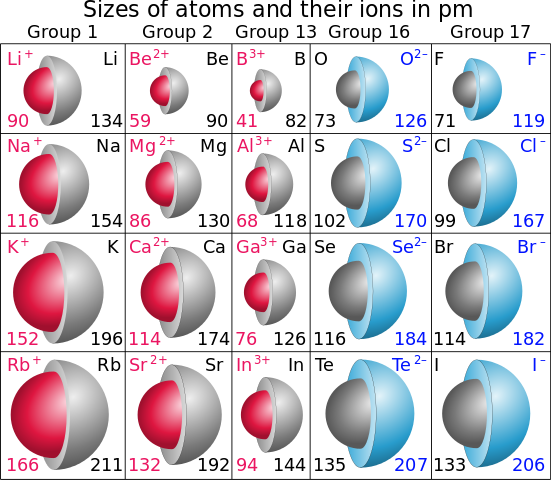 The size of the 1s orbital in $\ce{Li+}$ and $\ce{Al^3+}$ is not necessarily the same. In fact, they are quite different because of the much larger effective nuclear charge in $\ce{Al^3+}$. One can easily look up the wavefunction for the 1s orbital and see the radial dependence on $Z_\mathrm{eff}$.

Therefore, merely looking at the electronic configuration cannot tell you anything about the size. If that was the case then one would expect $\ce{Cl-}$ and $\ce{K+}$ to have exactly the same size, which is clearly not true.

You are missing the point here entirely. Mg and Ca are in the same group which is what makes them directly comparable. Li is not "above" Al any more than F is above Na.

The diagonal relationship holds because 1) you add an extra shell of electrons going vertically from $\ce{Li+}$ to $\ce{Na+}$, which decreases $Z_\mathrm{eff}$ and increases ionic radius; and 2) you go horizontally from $\ce{Na+}$ to $\ce{Mg^2+}$, which increases $Z_\mathrm{eff}$ (same number of electrons but one more proton) and decreases ionic radius.

Going one more step horizontally to $\ce{Al^3+}$, one can see that $Z_\mathrm{eff}$ should increase again. So your thoughts on the matter are correct, but they just do not get to the crux of the matter.

Be careful that the ionic radius is not always particularly well-defined and the values can vary from one source to another depending on how they are experimentally obtained.

The main difference between $\ce{Li+}$ and $\ce{Al^3+}$ is their charge. Aluminium has three times lithium’s charge.

When calculating orbitals, the first step is to set up a Schrödinger equation and then to see what the Hamiltonian operator is made up of. If you didn’t understand that sentence, just rephrase it in your mind to ‘what is the energy of an electron and which forces does it encounter?’ The most important force here is the nuclear charge, which creates a spherical potential energy gradient — the closer to the nucleus an electron is, the lower its potential energy. (You can think of this like a mountain — the lower you are the less potential energy you have.)

The next step is to solve (or approximate — we cannot solve it for systems with more than one electron) the Schrödinger Equation. Its solution will give you orbitals, spherical wave functions. To draw the typical picture of an orbital, we need to define a cutoff value first; this could be ‘the electron has a probability of $95~\%$ of being found within this boundary.’ And only after that can you talk about orbitals and their sizes.

Remember again that the effective nuclear charge is pretty much the most important thing in the life of a (core) electron. Doubling or tripling it increases the forces the electron is subjected to proportionally. Thus, the larger the charge the closer the electrons will come to the nucleus, or the quicker the wave function decays. This is also the reason why atomic radii decrease across a period: a higher effective nuclear charge exercises greater force on the surrounding electrons and draws them closer towards itself.

This part was the theory. What about the practice? Well, ionic radii are even less well defined than covalent radii; it basically comes down to obtaining a crystal structure of a specific salt and measuring distances. So all that the smaller ionic radius tells us is that anions can approach aluminium even closer than they can lithium. Again, this should come as no surprise, as the anions (being charged bodies by themselves) are also more strongly attracted by a triple positive charge.

0
Why does Mg2+ have the ionic radii bigger than Ca2+
0
Comparing radii in lithium, beryllium, magnesium, aluminium and sodium ions

5
For which pair of species is the difference in radii the greatest?
4
Why is the atomic radius of krypton smaller than that of potassium?
4
"Crystal radius" vs "Ionic radius"
17
Diagonal relationships in the Periodic Table
12
Why are there drastic changes sometimes in radius of isoelectronic ions?
1
Why do ionic compounds have higher melting and boiling points despite having smaller radii?
5
Why is the radius of the caesium cation smaller than that of the chloride anion?