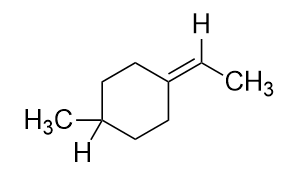 We can see that if we reflect the molecule (in the plane of the ring + double bond), its mirror image is not superimposable on itself, which makes it chiral:

In practice, the cyclohexane ring does adopt a chair conformation. That does not fundamentally affect the fact that the compound is chiral, as the presence of a chair conformation cannot "remove" this existing source of chirality (for example, there is no way for the hydrogen and methyl groups to swap places by virtue of a cyclohexane ring flip or a similar process).

Actually, this is very similar to the case of an allene, which you may or may not be familiar with. Notice how the conformation drawn above looks almost like this allene:

with the planar ring taking the place of the second double bond. These are examples of axial chirality (Wikipedia; IUPAC), where the chirality stems from the disposition of groups about an axis (in both cases, the axis in question is the C=C bond axis). Further explanation of axial chirality in allenes can be found in this question.

A note on nomenclature

The tetrahedral chiral centre can be named with the usual (R) and (S) stereodescriptors, as described in user55119's answer.

When it comes to the double bond, ChemDraw (and likely some other software) suggest that they can be named with the familiar stereodescriptors (E) and (Z) (the process is also described in user55119's answer). However, this is not fully appropriate.

The exact rules are complicated, but it boils down to the fact that the double bond in question is enantiomorphic: that means that when it is reflected, the configuration of the double bond is reversed. We can see that from the names generated above: the two mirror images have supposedly different configurations at the C=C double bond.

The descriptors (E) and (Z) are supposed to be used only for diastereomorphic double bonds, where the configuration is invariant (i.e. does not change) upon reflection. The large majority of stereogenic double bonds fall into this category, but this one does not. 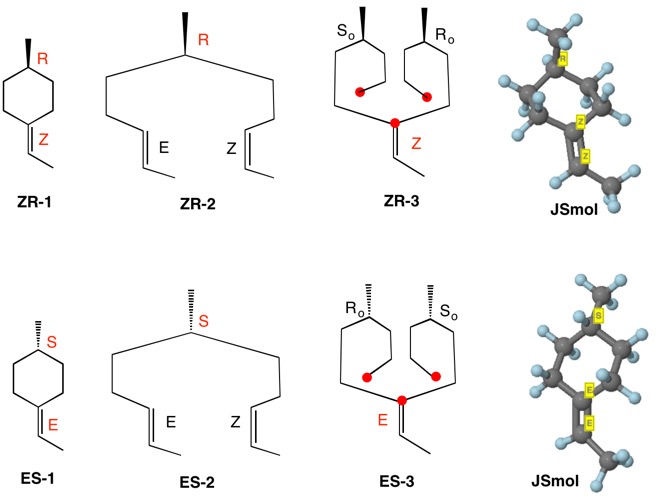 7
How to identify the asymmetric carbon in [4-(1-bromoethylidene)cyclohexyl]acetaldehyde?
0
Does this molecule show cis-trans isomerism?
22
Why are allenes chiral?
14
Can geometrical isomers be enantiomers?
13
What are the criteria for a molecule to be chiral?
2
Geometric isomers of substituted methylidenecyclohexane?
1
How to check which compound will show optical isomerism?
1
Are alkylidene cycloalkanes planar molecules?

10
Number of stereoisomers of a polyene
12
Does a chiral centre have to have 3 or 4 different groups attached?
1
Is chirality absolute or relative?
3
Chiral centres with stereoisomeric substituents
2
How can a compound having a plane of symmetry be Chiral?