What is the physical basis for Hund's first rule?

According to Hund's first rule, a set of degenerate orbitals are singly occupied first, before the second slot in any of the orbitals are populated. This is quite intuitive because electron-electron repulsions would make an atom more unstable if the electrons start filling two at a time in a single orbital.

However, the rule also states that in the ground state, electrons that singly fill the orbitals will adopt the same spin. Why is it necessary for the electrons to have the same spin?

My following answer is the "traditional" explanation of Hund's first rule, which is based on a smaller value of $V_\mathrm{ee}$ (electron-electron repulsions) in the triplet state arising from Fermi holes. According to Levine's Quantum Chemistry 7th ed.:

Wildcat has an answer which briefly mentions this. Aside from that Levine gives several references:

With that said, here is the old-fashioned argument for why parallel spins are favoured over paired spins (all else being equal).

The origin of Hund's first rule lies in "exchange energy", which is a way of saying that electrons with like spin repel each other less than electrons with unlike spin.

To see why, let's consider an excited state of the helium atom: $\mathrm{1s^1 2s^1}$. (The ground state configuration $\mathrm{1s^2}$ is of no use to us because those electrons have to be paired with unlike spin.) In the excited state, the electrons can either have parallel spin (the triplet case) or paired spin (the singlet case).

The spin wavefunctions are simultaneous eigenfunctions of the $\hat{S}^2$ and $\hat{S}_z$ operators. The total spin quantum number, $S$, can be found from the eigenvalue of the operator $\hat{S}^2$:

For more detailed discussion, refer to any QM text on the coupling of angular momenta.

There are three possible triplet spin wavefunctions, which are degenerate.

The singlet state is

The only way of constructing these are the linear combinations below.

If the wavefunction is 0 when the two electrons are on top of each other, that means that there is no probability of this happening. The average distance between the two electrons $\left\langle\left|\vec{r}_2 - \vec{r}_1\right|\right\rangle$ will therefore be larger, and on average the electrons will repel each other less, since they are on average further away from each other. This is known as a Fermi hole.

In fact, one can also show that the symmetric wavefunction has a larger probability amplitude when $\vec{r}_1 = \vec{r}_2$. This is known as a Fermi heap.

So, there is a decrease in electron-electron repulsion when the electrons are parallel - because this means they have a triplet spin wavefunction, and hence an antisymmetric spatial wavefunction, which has a Fermi hole.

There is another, perhaps more mathematical, way of looking at it, and that is to calculate the expectation value of the electronic energy for both wavefunctions. For the helium atom, under the assumption of an infinitely heavy nucleus (essentially an atomic version of the Born-Oppenheimer approximation), the total Hamiltonian (in atomic units) is

where $r_i$ is the distance of electron $i$ from the nucleus, and $r_{12}$ is the distance between the two electrons. The expectation value of the energy is simply $\left\langle\Psi\middle|\hat{H}\middle|\Psi\right\rangle$ (assuming our wavefunction is already normalised). It turns out that the only important term in our present discussion is the electron-electron repulsion term $1/r_{12}$.

Let's look at the triplet spin wavefunction (of course paired with the antisymmetric spatial wavefunction) first. The operator doesn't depend on spin degrees of freedom, so we can separate those, and the inner product of the spin wavefunction with itself is just unity.

Ugly, but that's what it is.

We can simplify it however by noting that the first and the fourth brackets are the same (since the variables in the integral are just dummy variables, interchanging the electron labels does not affect the value of the integral). This integral is traditionally called a Coulomb integral, since it simply reflects the average Coulombic repulsion between two independent (uncorrelated) electrons, one in the 1s orbital and the second in the 2s orbital. It is given the symbol $J_\mathrm{1s2s}$ (the subscripts indicating the orbitals that the electrons are in). Because this is an expectation value for a potential energy arising from repulsion, it is necessarily a positive quantity.

The second and third terms are actually also the same, again because the variables are just dummy variables and you can interchange the labels. This integral, however, does not have a physical interpretation; it is a purely quantum mechanical effect. It is called the exchange integral, and is given the symbol $K_\mathrm{1s2s}$. It's a bit harder to show, but the exchange integral is also a positive quantity (there is a question on it here). However, its magnitude is not as large as $J_\mathrm{1s2s}$.

Putting it all together (leaving out subscripts for clarity) we have

and if you were to perform the same calculation on the singlet spin wavefunction (not very difficult, just replace the minus signs with a plus!) you would get

Since $J > K > 0$, the expectation value of the energy for the singlet state is higher.

But I have more than two electrons. What now?

Well, you just have to do a ton more ugly maths and perhaps a few hundred more integrals. But the idea is the same. For every pair of electrons with parallel spins, there is a corresponding exchange integral that reduces the expectation value of the energy.

Therefore, in a $\mathrm{3d^5}$ manganese atom (we ignore the closed shells) there are

different pairs of d-d electrons with parallel spins. Therefore if you evaluate the expectation value of the energy, there will be a $-10K_\mathrm{3d3d}$ term, which is stabilising. This is precisely the exchange energy effect that Geoff describes in his answer.

The lowest energy state has parallel spins to maximize the exchange energy.

As you say, there's a Coulomb repulsion between two electrons to put them in the same orbital.

There's also a quantum mechanical effect. The exchange energy (which is favorable) increases with the number of possible exchanges between electrons with the same spin and energy. 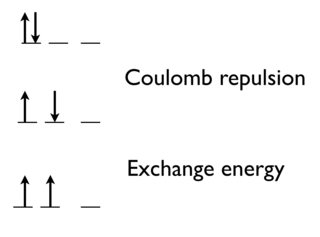 Going from the top state to the middle state, we remove the Coulomb repulsion between electrons in the same orbital.

Going between the middle to the bottom (most stable state and that predicted by Hund's rule), we gain the exchange energy, because these two electrons are indistinguishable.

Some understanding can be gained by looking at the symmetry of the orbital parts of the wavefunctions involved.

When electrons are paired with total spin = 0, (a singlet state) the spatial part of the wavefunction is symmetric and the spin part therefore antisymmetric. Its the other way round for the triplet state, spins parallel and total spin = 1, $\psi_{triplet} =\psi _{space}(antisym)\psi _{spin}(sym)$.

The effect is that the electrons occupy different regions of space in triplet states; they have a zero probability of being in the same place.
In singlets the electrons crowd together; formally there is a non-zero probability of being in the same region of space. This is why the electrostatic repulsion, which gives energy $e^2/r_{1,2}$ and is large when the electrons are near to one another, raises the energy of the singlet. Thus the degeneracy between singlet (spin paired) and triplet (spins 'parallel') is split.

Therefore the energy difference between singlet and triplet ( and more generally paired and unpaired electrons) is a consequence of the wavefunction symmetry and so the value of the total spin.

The picture shows the effect on the spatial part of wavefunctions illustrated with 2D 'particle in a box' wavefunctions. 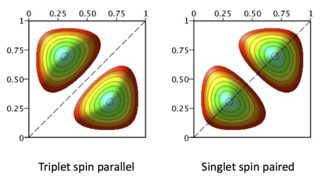 With respect to the coulomb and exchange integrals and energies, K and J respectively, both are positive, the total energy works out as $K+J$ and $K-J$ which shows the energy splitting.

1
Why is up spin in the px orbital and down spin in the py orbital considered an excited state?
17
Why does the two-electron exchange integral in Hartree-Fock theory have positive values?
31
What is the exchange interaction?
17
Why are full and half filled orbitals the most stable?
15
Why doesn't ionization energy decrease from O to F or F to Ne?
11
Hartree-Fock dipole moment
11
Derivation of the Orgel diagram for octahedral d2 complexes
10
How do I find the ground state term symbol for transition metal complexes?
4
Spin interaction term for a two-particle system of fermions with a potential that contains spin-spin interaction
4
Volume of orbitals
See more linked questions

3
Hund's rule & different H₂ molecules
5
The violation of a certain rule or principle in the following electronic configuration
1
Doesn't the fact that the lone pair on the nitrogen in amides occupy a p orbital contradict Hund's rules?
4
What accounts for the high spin state of the complex Tris(acetylacetonato)iron(III)?
6
Free radicals vs Hund's rule contradiction?
3
Order of filling electrons in Jahn-Teller energy diagram