Please can you explain me the group theory especially the reducible and irreducible representation and class and subclass and how to tell they are in the same group or not. I know it is a tedious task but help will be very much appreciated.

The figures below show you how to navigate your way round point group tables. The irreducible representations (irreps) are shown as the row of characters. A reducible representation is a collection of the irreps that can be reduced to a number of irreps. Some reminders about definitions, important but tedious. The web page molecule-viewer.com gives many example structures that you can manipulate and to which you can add planes and axes.

A symmetry operation is an operation that moves the molecule about a point into a new orientation indistinguishable to its original one.

A symmetry element is a line point or plane to which the symmetry operation is applied.

(This can be confusing as operations and elements tend to get merged as for example $\ce{C_2}$ can be an element, a 2-fold axis or operation, rotation by 180 degrees)

The first thing to determine is the principal axis, this is the axis with highest rotational symmetry (choose one if there are two or more that are equal). Make this the z axis and choose x and y on your molecule. Make sure that the x and y correspond to the same order of axes as used by the set of point group tables you are using. (There is no standard way). Do this by checking with a simple molecule such as water with $\ce{C_{2v}} $ point group.

The figure shows the principal axis and one 2 fold horizontal axis. The point group is $\ce{D_{5h}}$.(from www.molecule-viewer.com) Here there are approx 500 molecules for you to work out the point group. Some axes and planes can be added as hints. The molecules can be rotated etc. All commonly seen point groups have examples. 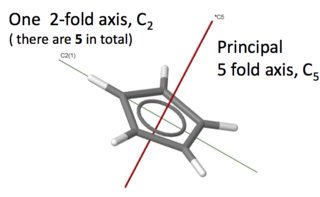 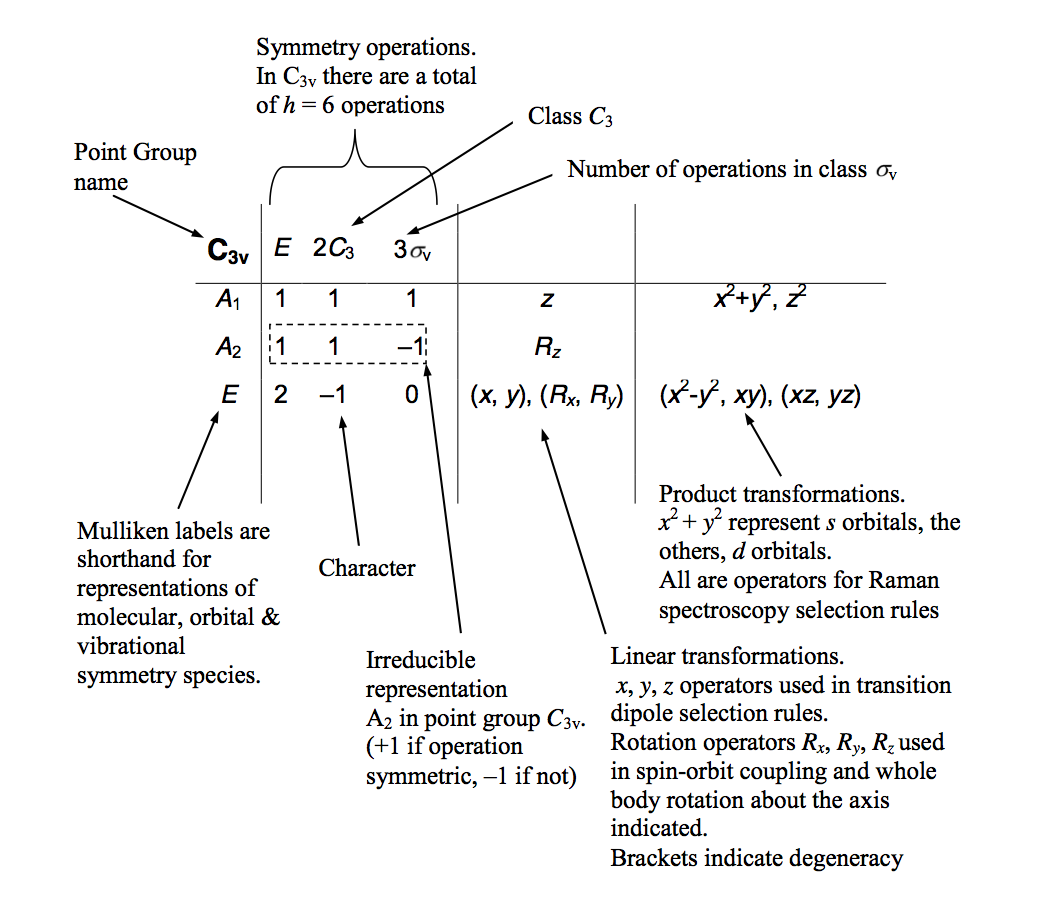 The table below shows the Mulliken labels. 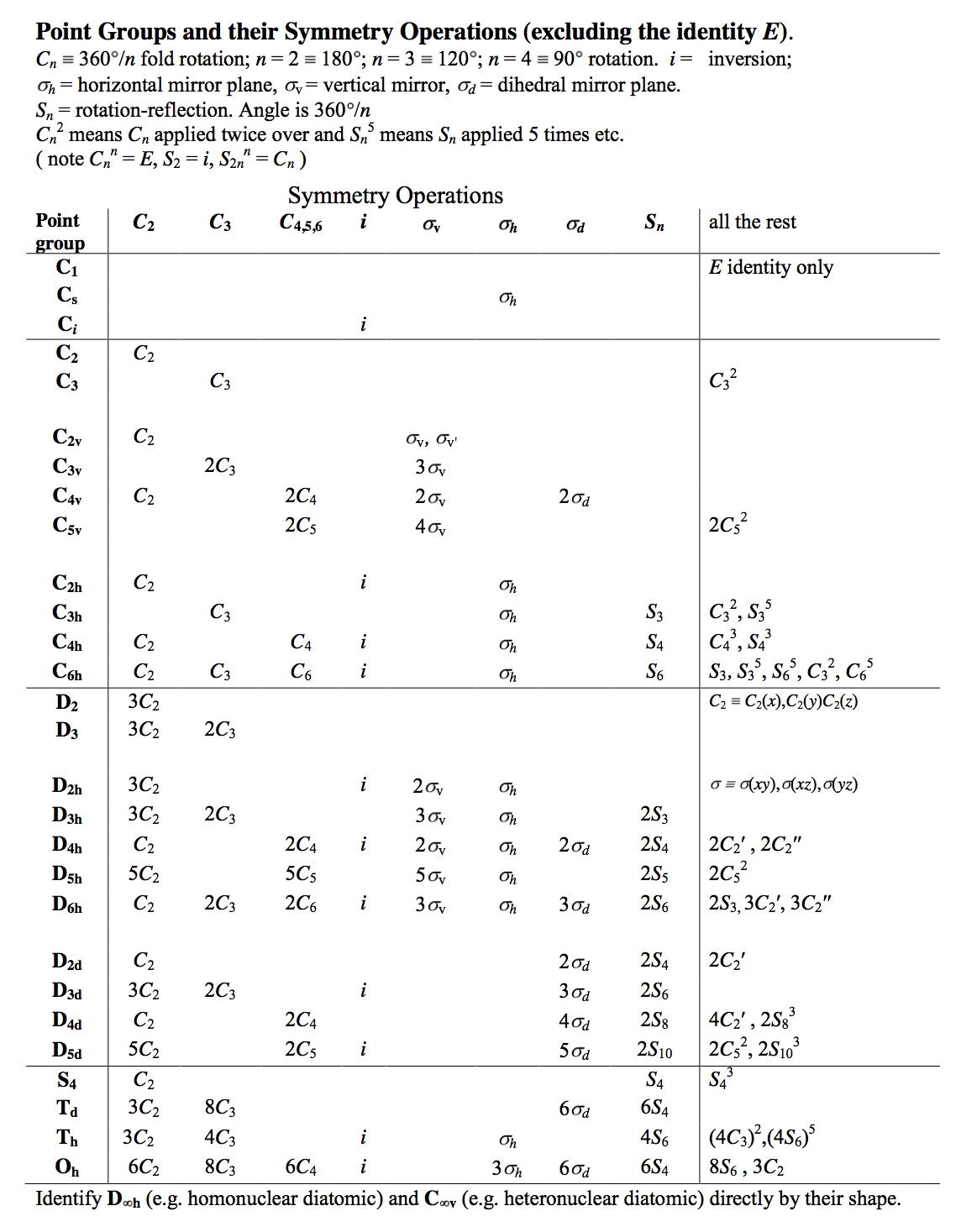 How to find irreps from reducible representations.

There are several ways to do this, most books give a formula but this can be tricky as its easy to make little sign errors so I always use a tabular method as explained in the figure below taken from my lecture notes. The reduced representation in $\ce{C_{2v}}$ is shown at the top. You also need this point group show below

To make the table to work out the irreps an extra row is added at the top of the point group table to hold the reducible representation and then the entries in the table are calculated as shown below. The values in the rows are added up and divided by the order of the group. The answer must be a whole number or zero, if not a mistake has been made. (the order is the total number of symmetry operations (columns in table) each first multiplied by number in its class, 4 for $\ce{C_{2v}}$ but 6 for $\ce{C_{3v}}$)

The method is quite quick as you once you have one value worked out others in each column are either the same or multiplied by an integer or zero depending on the point group. Don't forget that not all the characters are 1 or -1, in some tables they can be 2 or 3 etc, so you must always multiply by these values. 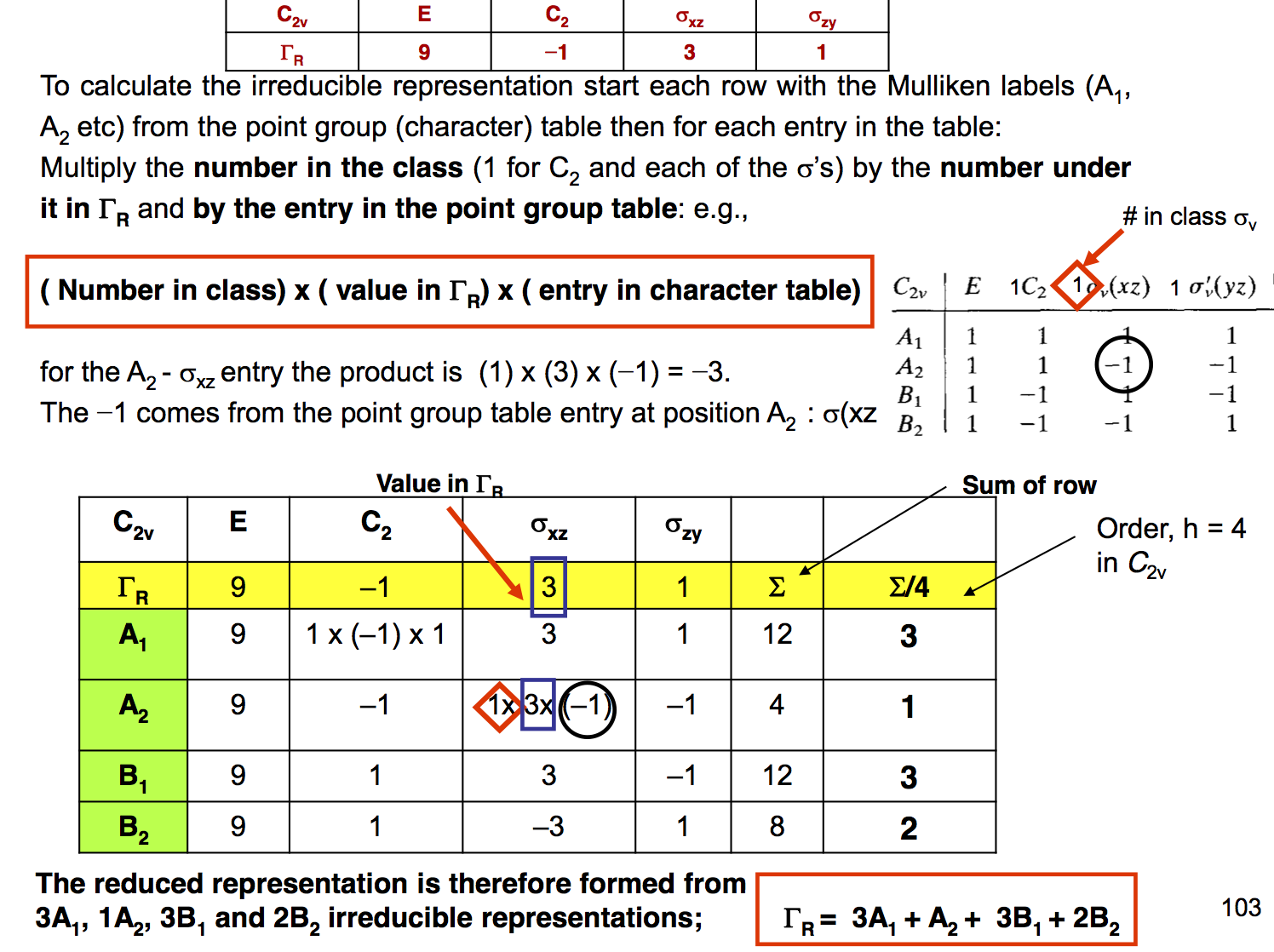 7
Notation for excited states
2
How can the ground state electron configuration for a d3 complex correspond to an F term symbol?
5
How do I interpret characters that are not 1 or -1 in a point group table?
5
Is there a geometrically intuitive explanation of the equivalence of the numbers of irreducible representations and symmetry classes?
2
Projection Operator Method on Cl4+
2
What does the order of a class mean in a character table?
2
Are the $+\leftrightarrow+$ and $-\leftrightarrow-$ methanol rotational transitions dipole-allowed?
2
How is group theory (and matrices) used in symmetry operations?
1
Spectroscopy pyrazine molecule
0
Understanding molecule infrared absorption
See more linked questions