Can electrons be present outside orbitals. If yes how does this affect chemical reactions

In my physical chemistry textbook it is written (Or typed) that orbitals are regions where probability of finding electron is high (90%-100%). But since orbitals are regions of probability is it possible for electrons to be present outside orbitals for just a small number of atoms in a reaction if so how does this affect reactions that take place with these small number of atoms

I think that your textbook is essentially correct. Typically for illustrative purposes orbitals are drawn with a 90% or 95% radius meaning that this is the region where that much of the electron density can be found at any time.

The wavefunction does extend to infinity, but the scaling of the decrease with distance is very severe, typically it is $\approx exp(-Zr/(na_0))$ where $Z$ is the atomic number, $n$ the principal quantum number, $r$ distance from nucleus and $a_0$ the Bohr radius $\ce{5.29 10^{-11}}$ m. Thus for, say, a 3s H atom orbital at 1 nm the wavefunction has decayed to 0.0018 of its maximum value, the probability of being between $r$ to $r+dr$ is the square of this value, i.e. the chance of being at a larger distance is tiny.

Thus we can assume that molecules can be reasonably described by orbitals with a cut-off value, i.e. atoms are discrete. Recent experiments using atomic force microscopes show that the picture of small discrete atoms is correct, as have numerous x-ray diffraction crystallographic experiments over the last century. Thus although an electron in an atom in its ground state could 'in principle' be anywhere in space the chance that it is any significant distance, i.e. many nanometers from its nucleus is effectively zero. Thus we have well defined molecules, whose shape as I have mentioned can be determined experimentally. This means that molecules exist as identifiable entities!

It also means that most molecules have effectively to collide for a reaction to occur, otherwise electrons in one molecule do not feel the influence of those in the other one sufficiently strongly to react. Thus the number of atoms that you mention might react, when the electron is at a very large separation (compared to average separation), is so small as to have no significant effect on a reaction. (Intermolecular forces do extend for some distance (nm) but their energy is small compared to bond strength and generally do not lead to chemical reaction.)

Two additional point should be mentioned, (a) in metals conduction electrons are not localised on any atom, although core electrons are and (b) in the gas phase highly excited atoms/molecules (called Rydberg atoms/molecules) can be produced by narrow band laser excitation to have electrons in highly excited levels only a few wavenumbers below dissociation. In this case the electron's wavefuntion's mean distance from the nucleus can be microns, ($\ce{10^{-6}}$ m ); as large a bacterium, quite remarkable.

There are more levels of abstraction involved. At first, orbitals are simplification and they are best described as "one electron wavefunction", ie. area of space where one electron can reside (or two, if you think of spatial orbitals, as opposed to spin-orbitals).

Being expressed as a wavefunction, the orbital (and therefore electron residing in it) has nonzero probability in whole space (I mean, whole universe). But the probability decays very fast.

If you plot a probability density, see image below, you can clearly see the behaviour. If, on the other hand, want to plot the 3d surface, which are often shown in textbooks, you have to state some cutoff value. Often it is probability density of 0.9, ie. 90%. By this you obtain the typical pictures of orbitals. 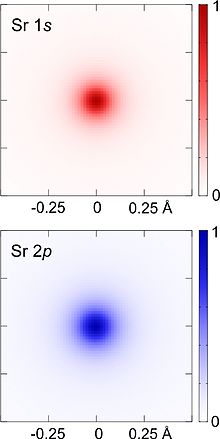 I would deliberately leave your question without answer, as they stem from severe confusion caused by your textbook.

An orbital is not a region of space where the probability of finding a bound electron is high. I suspect that your textbook meant that in the context of its shape an orbital is a region where probability is high. The orbital wavefunction is spatially infinite, and (of course) its square - the probability "density" - is therefore also infinite in spatial extent. In other words, it is a function of the quantum numbers of the system (atom) it is bound to as well as x,y, & z points of space (excluding time since this "picture" is a static one). As a function, it is an obvious contradiction to ask "does the function exist outside the locations where the function exists?". This doesn't really answer the question "does the electron always stay in its orbital?". Well, we know the answer to that is "no". If it did, there would never be chemical reactions! So, we know that an electron can be influenced to leave its orbital. And you may have learned enough about the Heisenberg Uncertainty Principle to expect that there are also spontaneous excursions from the energy of a given orbital, allowing dE to be >0 for a finite time dt. This consideration is not useful in dealing with chemistry using orbital concepts. In other words, transient perturbations from the orbital wave function aren't generally useful when thinking about atoms, molecules, and their reactions.

Not the answer you're looking for? Browse other questions tagged physical-chemistry reaction-mechanism electrons orbitals or ask your own question.

8
Can electrons switch orbitals within a shell?
3
Do really the electrons could only orbit in specific orbits with a fixed radius?
17
Can two electron occupy the same spatial spot in a statistical way?
6
What is the exact definition of the radial distribution function?