Why is (NH4)2[CuCl4] square planar complex but Cs2[CuCl4] is tetrahedral?

Why is $\ce{(NH4)2[CuCl4]}$ square planar complex but $\ce{Cs2[CuCl4]}$ is tetrahedral even though both have same oxidation number of copper and same ligands?

In solution, the $\ce{[CuCl4]}$2- is expected to exhibit terahedral, or nearly tetrahedral geometry.

The Jahn-Teller theorem states that degenerate orbitals cannot be unequally occupied. Molecules with unequally occupied degenerate orbitals will distort so as to render the orbitals non-degenerate, with more electrons occupying the lower energy states. Generally, this distortion leads to a reduction in symmetry. In the case of Cu (II), it is a d9 cation with a tetrahedral electronic configuration of (e)4(t2)5, so the three degenerate t2 orbitals are unequally occupied, therefore a distortion towards the square planar geometry of (eg)4(b2g)2(a1g)2(b1g)1, with no unequally occupied degenerate orbitals, is electronically favoured. Nonetheless, experimental evidence (1) indicates that this d-orbital stabilization energy is very small. Since copper is a first-row transition metal (not very big), steric effects dominate electronic effects allowing $\ce{[CuCl4]}$2- to assume a tetrahedral geometry. Most spectroscopic methods I've read involve looking at the molecule in crystal form (because that is where this effect gets interesting), but DFT studies of the $\ce{[CuCl4]}$2- hydrate in concentrated aqueous solution indicate that the anion's tetrahedral structure is more stable (2). 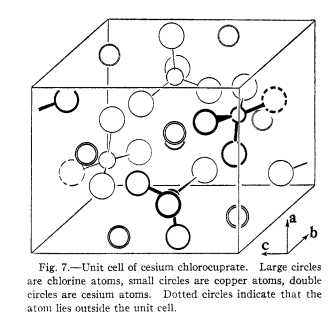 Square-planar co-coordination occurs in such a way that you effectively get octahedra with tetragonal distortion (4). I would imagine that this phenomenon is simply a result of the smaller cation allowing the unit cell to crystallize like that. The general idea with unit cells is that the cation is never allowed to "rattle" around, so the structure will find a way to fill in the space. Given the preexisting electronic favourability of square planar geometry, $\ce{(NH4)2[CuCl4]}$ this distortion favoured by close-packing is made even more favourable. 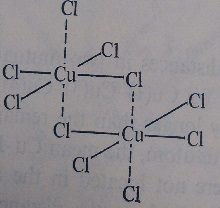