Why does the ionization energy decrease anytime the atom size increases?

I would like to have a better understanding of the relationship that exists between the Ionization Energy commonly known as IE and the size of an atom.

I think that the Ionization Energy can be defined as the smallest energy that is required to remove an electron from a gas phase atom.

Why does the Ionization Energy decreases when the atom size increases?

The ionization energy is the lowest amount of energy required to remove one electron(the most loosely attached electron) from each atom in one mole of an element in gaseous state to form gaseous (positive) ion.

There are certain factors that have an impact on the ionization energy value.

The Atomic radius is the distance between the to-be-removed electron and the nucleus. The greater the distance, lesser the force of attraction. Hence as this distance increases the electrons are easier to remove; lesser force is required to remove it from that attractive field of the nucleus. (This answers your question) Even the smallest change in this distance will cause a change in ionization energy for example The first ionization energy of Magnesium and Aluminum. The ionization energy should increase as the nuclear charge increases across the period but the I.E. of Aluminum is lesser than that of magnesium because there is a change in orbital which increases atomic radius, decreasing I.E. 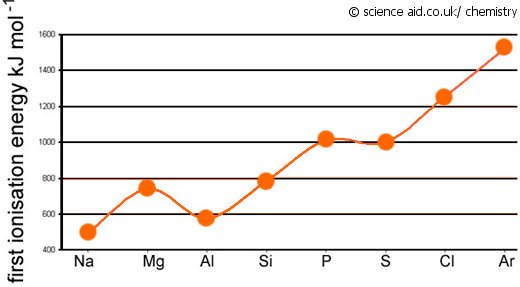 Now going for a bit more information. The Shielding effect of the other electrons decreases the I.E. because it doesn't let the outer most electron feel the full force of attraction.

IF both the first factors are CONSTANT (atomic radius and shielding effect of electron) only then the last factor comes in play. As the atomic charge/Nuclear charge increases, there is a general increase in ionization energy because of the increased force of attraction by the extra proton. for example, again across the period, the general trend is increase in ionization energy because there is no (significant) increase in atomic radius or shielding effect so the I.E. increases proportional to the Nuclear charge.
(the decrease in sulfur is because of the pair of electron in the p orbital repelling each other. Both electrons apply a force on each other. The looser of the two, is removed when energy is applied.)

That work is the ionization energy. How could it NOT go down for larger atomic radii?