Can Fe(CO)5 adopt both square pyramidal and trigonal bipyramidal geometries?

I know the hybridization of $\ce{Fe(CO)5}$ is $\mathrm{dsp^3}$. According to my book, coordination compounds with coordination number 5 can interchange between square pyramidal and trigonal bipyramidal geometries. Is it true for this compound? Doesn't seem so according to the picture: 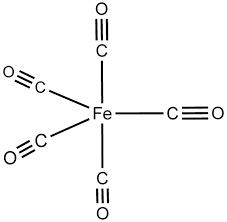 Was my understanding wrong somewhere?

Your book was correct that a five coordinate metal complex is able to adopt both square pyramidal and trigonal bipyramidal geometries, and in both cases the sp3d hybridisation scheme applies (if you believe in hybridisation...).

Which geometry is adopted depends upon a combination of steric and electronic factors, and isn't necessarily trivial to predict, though MO theory and crystal field theory can help understand which might be more favourable. 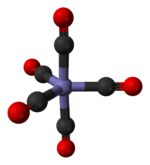 Whilst both geometries are possible (and indeed observed, IF5 is square pyramidal), I suspect that your confusion arises from the fact that iron pentacarbonyl is able to undergo a phenomenon known as Berry psuedorotation.

Berry psuedoroation is the process in which two of the equatorial ligands are switched out for the two axial ligands via a square planar intermediate. This process is sufficiently rapid that if observed by NMR, only one environment for the carbon of the CO ligand is observed (i.e. the psuedorotation is faster than the NMR timescale).

where $\alpha$ and $\beta$ - two greatest valence angles of the iron coordination center calculated from the CIF-file (ICSD #74197). 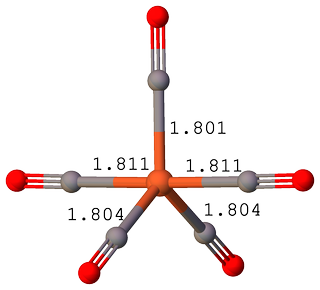 59
Why is it wrong to use the concept of hybridization for transition metal complexes?

4
How to determine the packing geometry of compounds with contradicting coordination number and radius-ratio values?
3
Why does Fe(CO)₄ adopt a tetrahedral, as opposed to square planar, geometry?
4
dsp3 and sp3d hybridization — what is the difference and which applies to square pyramidal?
6
Color of Anhydrous Transition Metal Salt
4
Bond Lengths: Equatorial vs Axial in Trigonal Bipyramidal
13
Are carbocations necessarily sp2 hybridized and trigonal planar?
10
Geometry of the pentachloridoindate(III) anion
3
How does resonance fail in approximating chemical structures?
2
Is PCl5 really trigonal bipyramidal in shape?
8
Why can't ligands with “locked structures” undergo chelation?