Shape of the P1/2 Orbital

I always thought that p-orbitals had a dumbbell shape as pictured below.

As orthocresol mentioned, this is all about relativity, so let's talk about it. I am hardly an expert myself, but I'll try to give an answer to the best of my limited knowledge. For an interesting and accessible overview of the incorporation of relativistic effects into chemistry, I recommend the 2012 review article "Relativistic Effects in Chemistry: More Common Than You Thought" by Pekka Pyykkö (free access!), one of the great names in the field.

The theoretical basis for most of our work as chemists is "old" quantum mechanics, developed up to around 1925, and one of the hallmarks of this era is the Schrödinger equation. The whole concept of orbitals comes as the solution of the Schrödinger equation for the hydrogen atom, (i.e. a two-body system composed of an electron in a spherically symmetric electric field originating from the nucleus). The stationary states in this system are spherical harmonics, described by the quantum numbers $n$, $l$ and $m$ (or $m_l$). The first two numbers determine the shape of the orbital, but we've gotten used to calling the second number by a letter (s, p, d, f, g, ... for 0, 1, 2, 3, 4, ...). So that's what orbital names, such as $\textbf{4s}$, $\textbf{3d}$ and $\textbf{5f}$ mean.

That said, old quantum mechanics is fundamentally incomplete, in a way which very much matters to chemists. In particular, in 1922 the Stern-Gerlach experiment discovered the property of spin. While its existence could be accommodated within the prior framework by "tacking it on" and adding an extra quantum number $s$, there was no theoretical background to explain it. This changed a few years later, when Paul Dirac incorporated special relativity into quantum mechanics. Old quantum mechanics implicitly assumes the speed of light is infinite, and by adequately introducing its finitude, many new experimentally-verified phenomena appear, such as antiparticles and, indeed, spin. In other words, spin is a purely relativistic quantum mechanical property!

The equivalent of the Schrödinger equation in relativistic quantum mechanics is the Dirac equation. Much like the Schrödinger equation, the Dirac equation can be solved for a two-body system composed of an electron in a spherically-symmetric electric field created by the nucleus. The resulting solutions ("Dirac orbitals"), however, are somewhat different. In particular, the quantum numbers $l$ and $s$ are no longer "good" quantum numbers (that is, they no longer describe stationary states, due to spin-orbit coupling), but their sum ($\overrightarrow{j}=\overrightarrow{l}+\overrightarrow{s}$) is. For the electron, $s=\frac{1}{2}$, and thus for each value of $l$, there are now two possible values of $j$, given by $|l+\frac{1}{2}|$ and $|l-\frac{1}{2}|$. This means that the s, p, d, f... subshells from the Schrödinger solutions are now split according to their $j$ values. The s subshells are unique in that they don't split ($|0+\frac{1}{2}| = |0-\frac{1}{2}| = \frac{1}{2}$), but are now termed $\textbf{s}_{1/2}$ subshells. The p subshells, which are triply degenerate via the Schrödinger equation, now split into a single $\textbf{p}_{1/2}$ orbital and two degenerate $\textbf{p}_{3/2}$ orbitals. The d subshells, previously quintuply degenerate, split into two degenerate $\textbf{d}_{3/2}$ orbitals and three degenerate $\textbf{d}_{5/2}$ orbitals. The trend continues similarly for the further subshells. Here is a figure from "Relativistic quantum chemistry: The electrons and the nodes", which will hopefully make it clearer: 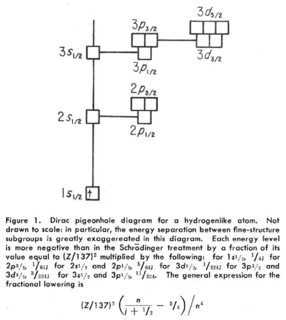 So what are the physical consequences of these different mathematical solutions? Firstly, the orbitals change in energy. Orbitals with a lower $j$ for a given $n$ and $l$ have lower energy (e.g., the single $\textbf{4p}_{1/2}$ orbital is lower in energy than the two degenerate $\textbf{4p}_{3/2}$ orbitals). The shape of the orbitals also change; all orbitals with $j=\frac{1}{2}$ are spherical, regardless of $l$.

According to "Contour diagrams for relativistic orbitals":

Similarly, all orbitals with $j=\frac{3}{2}$ are dumbbell-shaped, including $\textbf{d}_{3/2}$ orbitals. The article brings a helpful schematic: 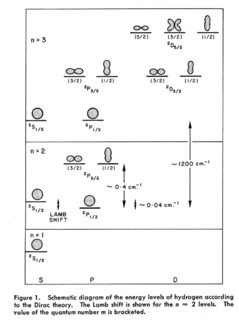 As an example of these two theorems the angular charge distributions for the magnetic states $m = \pm 3/2$ for a $^2P_{3/2}$ term are not only the same but are also identical with the two magnetic states $m = \pm 3/2$ of the $^2D_{3/2}$ term. It should be pointed out that the radial charge distributions of the $^2P$ and $^2D$ terms are different. [...] In this connection one of the consequences of the Dirac theory is that a single p electron or two similar p electrons, depending on whether $j=\frac{1}{2}$ or $j=\frac{3}{2}$ respectively, present spherical symmetry. Not only are all S states spherically symmetrical, as on the Schrodinger theory, but also all one electron systems having but one valence electron and that electron in a $^2P_{1/2}$ state, eg., the normal states of B, Al, Ga, In, Tl.

The article also shows a table of the angular distribution functions for the wavefunction. Note how the function is equal to $1$ for $\textbf{s}_{1/2}$ and $\textbf{p}_{1/2}$ orbitals. That is, there is no angular dependence, implying spherical symmetry. 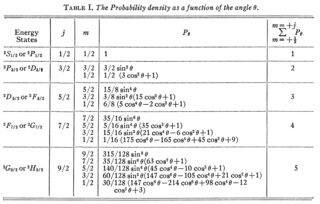 The article also brings some diagrams and pictures of simulated orbital shapes. 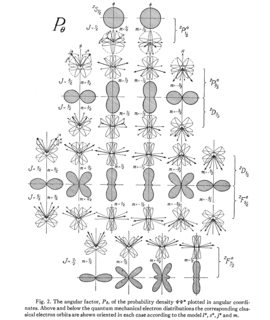 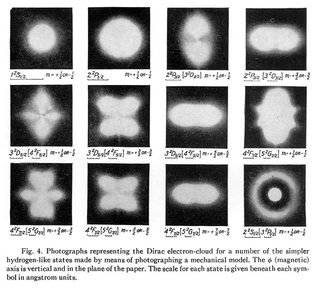 I wouldn't be able to tell you why this is the case any more than I would be able to explain the shapes for the solutions to the Schrödinger equation - that's just how it pans out.

Another difference is that the Dirac orbitals do not possess nodal points or planes. They are now replaced with "pseudo-nodes", where the wavefunction assumes very small values, but never reaches zero anywhere. This is nicely shown in this figure from "Relativistic quantum chemistry: The electrons and the nodes": 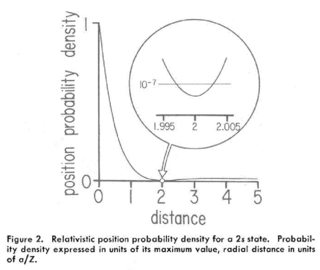 Being in a higher energy state, electrons in the $\mathrm{p_{3/2}}$ are naturally further away from the nucleus, and orbital on the whole will have a lower electron density.

6
What comes after f-orbitals, and in what order are they filled?
4
What do the subscripts 1/2 and 3/2 for the p-orbitals refer to?
0
Difference between subshell and sub-subshell?
1
Question on theoretical existence (or lack thereof) of spherical symmetry of flerovium and/or oganesson

12
How do Electrons Cross Nodes in Orbitals?
19
Observability of Orbitals and Orbital Energies
3
Why energy of all d orbitals is same?
3
What is the difference between the mean radial distance and the most probable radial distance of an orbital?
6
What is the exact definition of the radial distribution function?
1
Why are s orbitals more “penetrating” than p orbitals?
3
When people say "The energy of an orbital depends on its ℓ value due to screening effect" , what is screening what?
1
Size of Orbitals, Making Intuitive Sense of Quantum Model, Nomenclature of Subshells in the Quantum Model