In my book it talks about amino acids. It says the general structure of an amino acid is as follows: 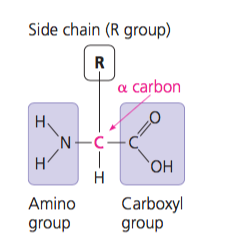 However, on the next page it lists specific amino acids such as glycine shown here:

My question is when comparing the first image to glycine, why does glycine or any of the other specific amino acids have an extra H atom as in "H3N+"?

Where does the extra H come from and why is it positively charged?

Also, on the general structure it shows the an amino should have a COOH but on glycine it is just C double bonded to an O and then another O- negative charge.

Does this have to do with the pH and ionization?

The two forms of amino acids that your question asks about are called zwitterions (technically IUPAC says they should be called dipolar ions but the term zwitteron is pervasive).

Since amino acids contain both acidic (the carboxylic acid) and basic (the amine) moieties the molecule is able to undergo what almost appears to be an intramolecular acid-base reaction in which the acidic proton of the carboxylic acid protonates the amine, this is what gives rise to the species on the right of the image below.

Its worth pointing out the this property of the amino acids is valid at physiological pH for the naturally occurring amino acids, generally in aqueous medium (which living organisms have. Also as Jan pointed out in the comments, other polar solvents would also allow the amino acid to show this characteristic).

At other pH values, the molecules become singly ionised, favouring either the cationic or anionic forms. The range of pH values at which the amino acid is zwitterionic will also vary depending on which amino acid you're looking at (the pKa values are different for every amino acid, even if only subtly) 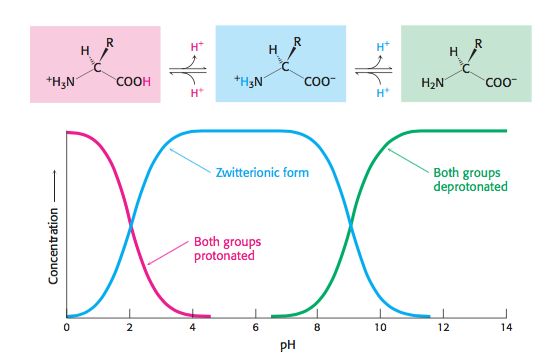 NotWoodward has answered it perfectly! The glycine which has both positive and negative (resulting neutral charge) is a zwitter ion form. This form is achieved at different pH for different amino acids depending on their R groups.

How does pH actually affect the amino acid? I always break it down when I explain it to my students as follows:

An amino acid in a very protonated solution (low pH) is going to be saturated with hydrogen ions, so all molecules that can take a proton will take it as they are abundant. Therefore, N will take them and become $\ce{NH3+}$ and the carboxyl group will take it and form COOH, but as you keep on adding a base (increasing the pH), the base would react with an available proton for neutralisation.

Not the answer you're looking for? Browse other questions tagged organic-chemistry acid-base biochemistry amino-acids or ask your own question.

2
What happens to the amino acid when it is in a solution with the pH of its isoelectric point? (zwitterions)
1
How does alkaline hydrolysis of peptides occur?
8
Why is the pKa (COOH) of alanine and glycine similar but the pKa (NH3) different?
2
How to rationalise the protonation state of amino acids
3
Calculating charge of amino acids (am I doing it right?)
7
Formation of zwitterion from amino acids
4
How does existence of alpha and beta form of glucose prove that it exists as a cyclic structure
5
Peptide bond formation involving side chains of charged amino acids
1
Melting points of benzoic and stearic acids