In an oral exam for physical organic chemistry, one student was asked to explain the differences in the ionization potential ($IP$) of syn and anti tricyclo[$4.2.0.0^{2,5}$]octa-3,7-diene (unsaturated 3-ladderane, see Figure).

Apparently, the $IP$s were as follows:

Koopman's Theorem $IP=-\epsilon_{HOMO}$ might help us here. I think it leads us to an orbital diagram. How do I have to combine the $\sigma$-bonds with the $\pi$-system to be able to explain the difference in the $IP$? Maybe you know a paper for it? I checked out Joseph J. Gajewski's Hydrocarbon Thermal Isomerizations (2004), but he only discusses mechanistic features, no theoretical aspects. 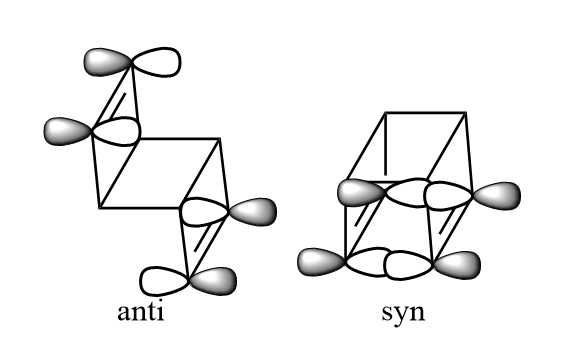 Browse other questions tagged organic-chemistry physical-chemistry molecular-orbital-theory ionization-energy or ask your own question.

1
Syn Dihydroxylation of Alkenes
0
Syn-addition or anti-addition to fumaric acid?
2
Anti-bonding molecular orbitals
9
Why do bonding and anti-bonding states split in energy (mathematically)?
4
When is donation into an anti-bonding MO stabilising?
4
Is Hoffman elimination anti or syn elimination?
0
Stability of Gauche and Anti form in conformational Isomerism