What happens to the mobility of Group 1 elements going down the periodic table?

Whilst reading the book, So you want to go to Oxbridge (Third Edition), I noticed that it states that a past question given during an interview for the place on the undergraduate chemistry course (M.Chem) was:

What happens to the mobility of Group 1 elements going down the periodic table?

When you have charged particles in a liquid acted upon by a electric field, the experience a force, and said force accelerates them to a terminal, drift speed.

Note: The physical treatment of the problem, and the notion of terminal speed is quite similar to say a ball falling from the top of a sky scraper through air (a fluid medium)

Now, let's go back to our charged particles in fluids. Let's say we have applied a voltage $\Delta\phi$ between two large, planar electrodes, immersed in the liquid and separated by a distance $l$

The magnitude of the electric field, and the electric force experienced by an ion of charge $ze$ are given by the following relations:

Assuming we have spherical particles of radius $a$, let's say our retarding force is given by Stokes' Law

When the electric force is exactly balaced by the viscous drag, the acceleration drops to zero and this final speed of the particle is called the drift speed ($s_d$). $$F_{\text{friction}} = F_{\text{electric}}$$ and solving for the drift speed we get, $$s_d = \frac{zeE}{6\pi\eta a}$$

At this point we note that the drift speed is proportional to the applied electric field and introduce the following definition:

and we call $\mu$ the mobility.

From the aforementioned equations/definitions one can deduce that $\mu \propto \frac{1}{a}$. Thus, bigger/bulky ions ought to have lower mobilities, and lower drift speeds in solution.

However, $a$ is not the ionic radius, but the Stokes radius (or the hydrodyanmic radius), i.e the "effective radius" of an ion in solution taking into account its solvation shell (i.e the solvent molecules surrounding the ion). I believe the following illustration is instructive, 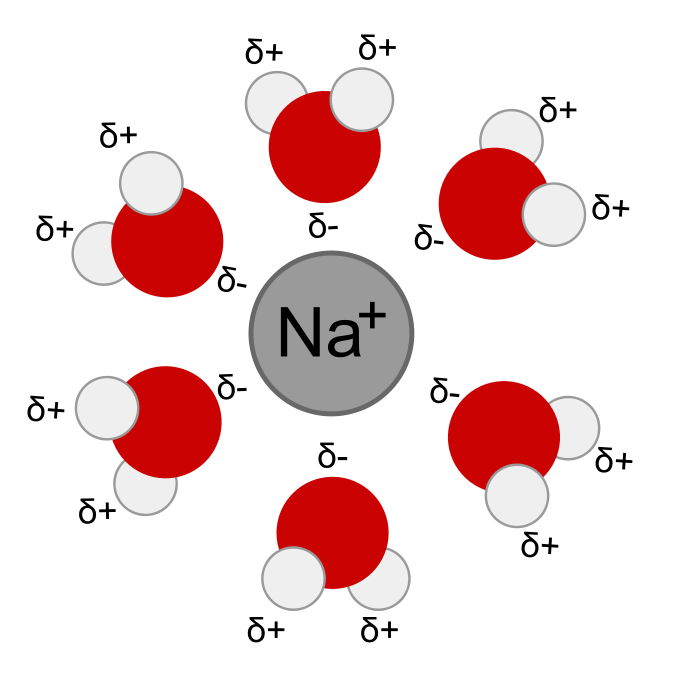 The size of this solvation shell depends on how "attractive" an ion appears to a solvent molecule, and that in turn depends on the electric field produced by the ions.

here $r$ is the ionic radius. So smaller ions have a larger solvation shell than larger ions (assuming they carry the same charge).

This is the reason why mobilities of alkali metal ions increase from $\ce{Li^+}$ to $\ce{Cs^+}$ (and not the other way around); the lithium ions are effectively dragging a large amount of solvent molecules with them and thus, move slower.

5
What is the chemistry behind amalgamation?
0
What happens in an acid and metal reaction where the acid is twice as concentrated and the metal twice as much in quantity?
21
What causes the iridescent colour in laboratory grown bismuth?
20
Why are Group 11 elements unreactive?
1
What is the difference between activity and reactivity when discussing elements?
0
How does density of alkali metals increase down the group?