I'm having troubles to understand a part of my lesson. I have no idea where to ask my question, but it is consider as chemistry so here we go.

Let me introduce some notations :

$x$ and $y$ are the mole fractions of the same compound but respectively in liquid phase and in gas phase.

Let now me introduce (translating from french to english) you the part of the lessons in which I have troubles : 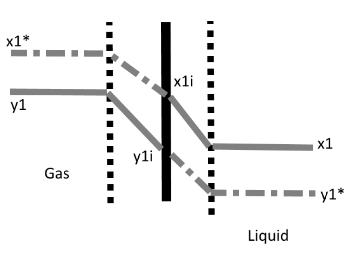 We can for example define a fictive gas phase which will be in equilibrium with the liquid phase (or the contrary). The mole fraction of the compound $1$ is by definition $$y_1^*=K_1^{eq}x_1$$

Now I'm having troubles their :

I really don't understand this last relation, if someone can help me, I would be glad. I apologize in advance for the troubles you can have too, to understand what I tried to translate here.

PS : I have really no idea for the tags, feel free to edit them

Not the answer you're looking for? Browse other questions tagged thermodynamics process-chemistry or ask your own question.

3
What is the difference between an industrial and a laboratory production method?

7
How to find and use the Clausius-Clapeyron equation
6
Chemical potential of mixtures
0
Effect of an inert gas on steam vapor pressure at equilibrium
13
How many particles are necessary to observe a well-defined state of matter?
9
Deriving heat capacity in terms of internal energy U and natural variables S & V
1
Expression for fugacity coefficient derived from a pressure-explicite EOS
0
Why does a NOx container get cold when NOx is released? and What is the relationship of the vapor pressure curve with the liquid-vapor dome?