Carbon's most commonly found allotrope is graphite/soot/fullerene/carbon nanotubes which are all $\mathrm{sp^2}$ hybridized forms of it, while silicon being its first periodic twin is mostly found in the $\mathrm{sp^3}$ hybridized form in bulk, while formation of silicene is extremely difficult. While in the case of carbon, diamond is the one which is harder to find, what is the reason for this discrepancy?

Carbon — and all the other elements of the second period, for that matter — is exceptionally good at forming double bonds. A double bond is formed if there is a σ bond and a π bond. Forming a σ bond is not hard: You have two orbitals coming from two different atoms pointing at each other. Forming a π bond is much harder, since the orbitals are pointing orthogonally away from the bond-axis. Thus, the overlap of π bonds is often a lot weaker than for σ bonds.

This gets more important if you consider third-period elements rather than second-period ones. They have a total of eight more core electrons making them much larger in size and the orbitals more diffuse. A σ bond is still formed easily, there will be the point when two diffuse orbitals are close enough to interact in a σ fashion. To arrive at favourable interactions for a π bond would require the atoms to come much closer than what would be comfortable; unfavourable interactions between the core electrons would already be a thing.

In fact, I was taught in my Concepts of Inorganic Chemistry class, that disilene $\ce{Si2H4}$, the heavier homologue of ethene, does not form a classical π bond. Instead, it can be understood as a par of two singlett silene fragments $\ce{SiH2}$ which approach each other so that the empty p-orbital of one silene can interact with the lone pair in an $\mathrm{sp^2}$ orbital of the other silene fragment. Obviously, the symmetry is lower and the bond is much weaker.

The primary reason why diamonds are not more common is the kinetic control of the graphite to diamond reaction.

The activation energy for a conversion from diamond to graphite is very high as a previous poster on this forum has estimated and sourced: Are diamonds REALLY forever? 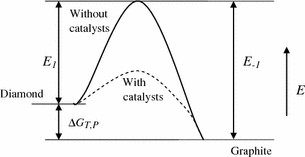 In regards to why silicene is not more common than graphite, we must consider pi-stacking. Pi-stacking refers to the stacking of p-orbitals which allows for the free flow of electrons in pi-bonds allowing for further stability. Silicon's bond's do not allow for pi-stacking and thus do not form the layered and stable structure that we see in graphite (Jose, Datta, 2014).

Not the answer you're looking for? Browse other questions tagged stability hybridization carbon-allotropes or ask your own question.

58
Are diamonds really forever?
0
Why does silicon's larger size prevent it from showing catenation as much as carbon?