So I have been trying to understand how to draw R and S configurations. I feel like I have understood how to draw them, but every time I do a question, I get a wrong answer.

So here is what I have understood,

But then there is this picture for example from my book, 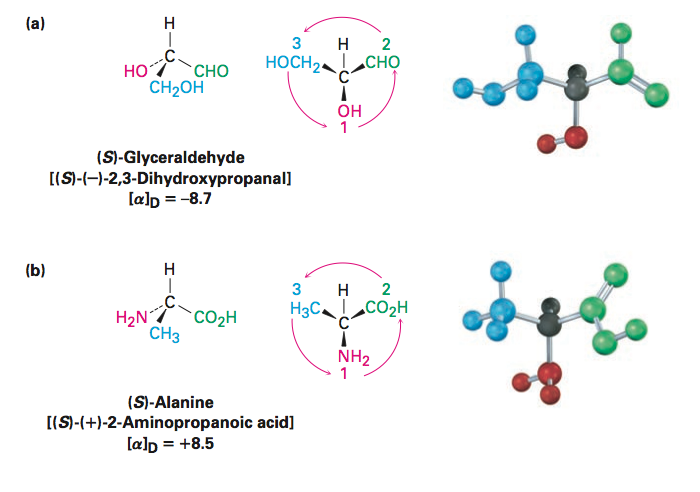 I have been going crazy trying to understand it. The things I do not understand are these,

1) I understand the diagrams on the right side. That I have been doing as well

2) But then when we look at the diagrams on the left. The configuration is completely opposite. Even though it says S, the configuration is like of a R. Plus the highest one is going into the page and not the hydrogen. WHY? It is driving me crazy because they do that for all the examples. When they S, they actually make an R and vice versa. Whereas on the internet it is a different story. So I really need someone to tell me what I should do.

This is difficult to explain, even face to face, but I'll give it a try as I know how frustrating this can be to grasp. Looking at the wedge and dash model, pick one of the four atoms/groups that ISN'T the lowest priority and ISN'T in the dashed (going away from you) position. Doesn't matter which as long as it meets the two aforementioned rules. Personally, I prefer to pick the wedged (going towards you) group. Now, "freeze" whichever atom/group you chose, and by this I mean this group/atom will remain in the exact same position it's already in. In fact, go ahead and draw the central carbon atom with the dashed line, wedged line, and both normal lines, but omit the groups/atoms for now (and draw it the same way it is pictured above on the left, it makes it much easier to visualize). So you should have a C with all 4 bonds drawn out from it. Now, go ahead and write in the atom/group you decided to freeze in the SAME position as it was before. Now, the objective is to get the H atom (or lowest priority group) to be at the dashed position. And remember, the frozen atom/group cannot be moved. There are only two other positions the H atom could assume, as it cannot occupy the frozen atom/groups location, and you don't want it in the position it's already in. So in the case of the first molecule, it can either occupy the position of CHO or OH (if you chose the wedged group/atom to be stationary). Well, you want the H atom to be in the dashed position, which is currently occupied by OH. So on your new molecule, go ahead and draw in the H at the dashed position where the OH was in the original drawing. Now, youve effectively rotated the H into the position that the OH was. Now the final rule you must follow, is that no group EXCEPT the one you chose to freeze can remain in the same position as it was in the original drawing. This leaves only one location for the OH to be moved to, and one location for the CHO to be moved to. The hydrogen was already moved to a new location, so now you must move the OH group and the CHO group to new positions, and it cant be either of the already occupied positions (the positions occupied by hydrogen and the group you chose to freeze, which in this example is the wedged position). The OH must occupy the old position of CHO, and the CHO group must occupy the old position of H (why must they occupy these exact positions? Because there are only two unfilled positions, and remember the newest rule, all groups/atoms that arent the frozen group MUST occupy NEW positions). So go ahead and draw them in. Now your molecule should be ready to evaluate for R/S configuration.

Be consistent when redrawing the molecule with the original drawing. Don't draw the wedged bond on the top of the molecule if it was on bottom in the original drawing. Hopefully this helped, this is a confusing subject though and like I said earlier it's difficult to explain even in person. I would definitely recommend getting a set of ball and stick models as it makes visualization much easier. Practice enough and you'll get to where you dont need them anymore.

By the way to clear up any confusion, this step-by-step is essentially rotating the molecule (you aren't changing the structure or stereochemistry). I simply laid out detailed directions so that if you were having difficulties visualizing rotating the molecule in your head, you wouldn't have to think about it. As long as you follow the directions and rules I have laid out, it should result in a new drawing of the original molecule from a different angle, the angle in which the lowest priority group is in the dashed (going away from you) position

Use the simulation linked below to go back and forth between the priority 4 substituent on the top (OPs left panels) and behind the plane of the display (OPs middle panel).

It is like looking at a clock from behind. If you look from the front, clocks go clockwise, but if you look from the back (and the clock is translucent), if goes counterclockwise. That is why it is important to correctly orient the priority 4 substituent before determining R vs. S.