Why are ring currents associated with aromatic systems diamagnetic while those of anti-aromatic systems are paramagnetic? Does it have anything to do with the number of delocalised electrons 4n+2 and 4n , respectively?

Yes it has to do with the number of electrons. Consider a simple model of the electron on a ring, then the electron has to follow a circular path and its wavelength has to 'fit' exactly round the ring. Thus the wavelength has to satisfy the condition $L=q\lambda$ where $q$ is a quantum number $q=0, \pm 1, \pm 2 ...$ characterising each eigenstate. The energy in this simple model comes to $E=(hq)^2/(2mL^2)$ ($h$ is the planck constant, $m$ the electron mass). Now in this model filling up the energy levels according to the aufbau principle, (Pauli principle & Hund's rules) leads to 2 electrons in $q=0$ (which is singly degenerate) and 2 in $q=+1$ , and $q=-1$ etc which are all doubly degenerate in energy.

Thus $4n+2 ~~ \pi$ electrons fill up all levels with two electrons in each level. The $4n~~ \pi$ contains only a single electron each. This is because it takes less energy to add one electron to each of the $q$ levels rather than pairing them up. The sketch shows this. 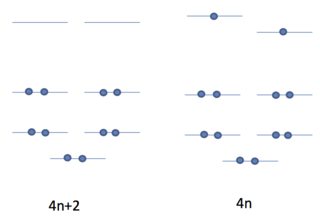 The unpaired electrons are shown in the $4n$ column, however, the levels are also shown as being split in energy. This is due to the Jahn-Teller effect. This states that a slight interaction between degenerate levels can cause the degeneracy to be split and so lower the energy. The interaction could be due to slightly different bond lengths and the energy levels are split by only a small amount relative to the gap to other levels.

Although not shown in the diagram, (which is thus slightly inaccurate) both spins will occupy the same lower level so in this sense, [4n]annulenes do not really exhibit molecular paramagnetism. The electrons interact with the magnetic field $B_0$ and this leads to a mixing of levels and this causes a paramagnetic contribution to the shielding constant. This is larger than the diamagnetic contribution for lower orbitals.
Thus in [4n]annulenes we speak illustratively of a 'paramagnetic ring current' and molecules showing this effect are called paratropic and those with no ring current atropic.

The key to this is determining whether or not your electrons in the relevant orbitals are all paired or not. If an orbital contains only a single electron, then we expect the molecule to be paramagnetic. Compare, for example, the MO diagrams for benzene and cyclobutadiene (these diagrams can readily be found in any organic chemistry text or simply by Googling the name of the molecule followed by "MO"). You will notice that, for a benzene molecule, all six of the electrons in the pi system are found paired together in bonding molecular orbitals. However, if you look at the diagram for cyclobutadiene, while the lowest two-energy electrons occupy the lone bonding orbital, the other two electrons singularly-occupy the two degenerate (i.e. equal energy) non-bonding molecular orbitals (as we expect by Hund's Rule). According to MO theory, we would expect such a species -- be it an atom, ion, or molecule -- to be paramagnetic.

Not the answer you're looking for? Browse other questions tagged organic-chemistry aromatic-compounds nmr-spectroscopy magnetism or ask your own question.

4
What happens to chemical shifts of protons close to aromatic systems in ¹H-NMR?
12
Is a quinone ring aromatic?
3
Why are anti aromatic compounds unstable?
2
Why can't diamagnetic, and paramagnetic magnetize?
1
What about the aromaticity of cyclopropenylidene?
1
Non - aromatic nature of quinones