Chemical compounds responsible for the colors in flowers?

I know that anthocyanins are a class of compounds responsible for the purple colors found in flower petals.

Anthocyanins (also anthocyans; from Greek: ἀνθός (anthos) = flower + κυανός (kyanos) = blue) are water-soluble vacuolar pigments that may appear red, purple, or blue depending on the pH. (same reference as above)

The anthocyanins, when extracted from flower petals with water, can be used as acid/base indicators, producing red colors in acid and blue in neutral solutions (in basic solutions they turn green, yellow, and then become colorless). When I've done the extractions, some red petals produce a red color in acid and maintain the red color at higher pH than purple flowers (see plate below), but some red flowers produce colors that seem to follow the normal progression. 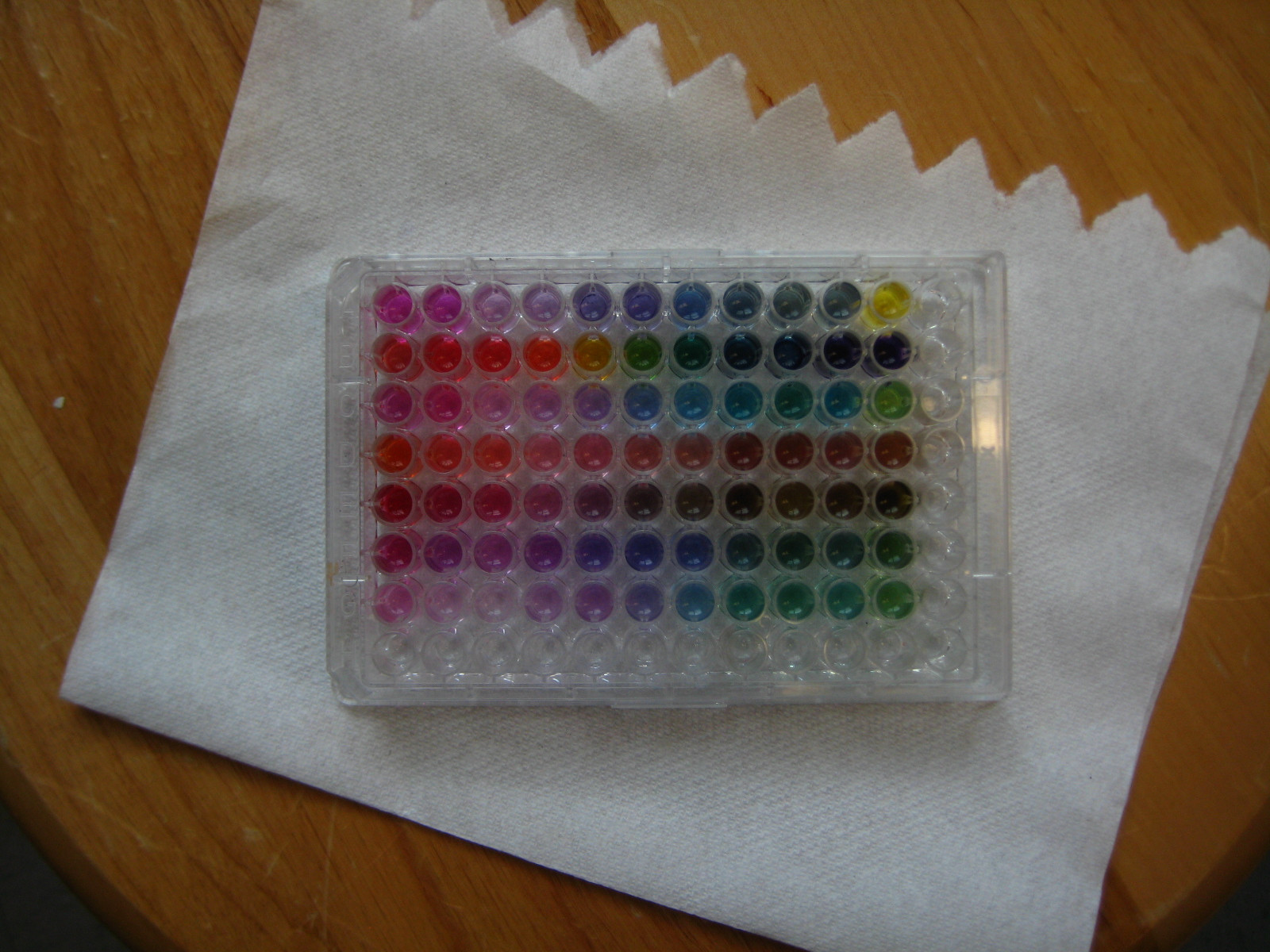 Row 2 from the top was a purple flower, row 3 a red flower and row 4 also a red flower. (pH values start at 2 on the left and increase by 1 pH unit as you move right by adding the water extracts to buffer samples in the wells.)

So, are there other classes of compounds responsible for the red and yellow colors found in flowers? Can the red colors that give a "normal" anthocyanin pH response arise from pigments held in an acidic environment in the plant? (That may be a biology question, but I'm interested in the chemistry side of where the color comes from.)

are there other classes of compounds responsible for the red and yellow colors found in flowers?

Interest in colors, specifically dyes, was a real motivator for serious chemical work. Some of the early efforts were aiming to mimic Tyrian purple, also known as Royal Purple, because in antiquity it was worth its weight in gold.

Two classes of molecules come to mind other than anthocyanins in phytochemistry, such as the closely related flavones (its root means yellow) and the distinct carotenes (its root means carrot, but also responsible for flamingo color).

Can the red colors that give a "normal" anthocyanin pH response arise from pigments held in an acidic environment in the plant?

A real sharp organic chemist by the name of Richard Willstatter proposed this in the early 1900s. He was working on determining the structure of the pigment responsible for the blue color in cornflower. He extracted the same substance coming from a rose and proposed that all flower colors were due to a different pH in the sap. As your experiment clearly points out, however, alkaline conditions are typically required for the blue anion. A Japanese group argued that alkaline conditions in the sap were unlikely and that instead these different colors can be explained by the formation of metal-organic complexes.

It wasn't until 2005 that a definitive crystal structure was determined from the cornflower pigment called protocyanin. It turns out that the blue color comes from a supermolecule containing one $\ce{Fe^{3+}}$, one $\ce{Mg^{2+}}$, two $\ce{Ca^{2+}}$, six anthocyanin and six flavone molecules packaged together in a complex structure. This color, as I vaguely recall, remains blue from pH 7 until pH 1! This agreed with some earlier evidence which suggested a complex species by the temperature dependence of the pigment.

These are not easy studies to conduct and I'm not familiar with how in-depth red colors have been studied, but it is certainly possible a complex species is actually how the red pigments form in vivo. Keeping in mind that plant vacuoles have a pH on the order of 5, we'll generally notice a loss in red above pH 3 in solution for a pure anthrocyanin in solution as hydration of the cation occurs. Stability of the color, and thus cation, obviously must be obtained either via copigmentation or with metals in a plant.

Janice, apart from the benzopyrylium (anthocyane) dyes you mentioned, there's quite some red to be found among the natural hydroxy-substituted naphthoquinones and anthraquinones, e.g.

I hope that helps a bit.

Ahh, I forgot to mention

While others have already mentioned the carotenoids in general, lycopene is your favourite if you want it really red :)

If you're interested in lycopene in particular, don't bother to buy it from chemical suppliers. The lycopene concentration in tomato paste is that high (and the paste dirt cheap) that the extraction is the way to go. Colleagues of mine working in photosynthesis research did that all the time.

PS. I'm sorry, you asked for red dyes in flower petals, not natural red dyes in general. Otherwise I would have mentioned a member of another class of compounds we didn't cover so far:

Not the answer you're looking for? Browse other questions tagged organic-chemistry acid-base everyday-chemistry photochemistry or ask your own question.

25
How may copper acetate ligands be manipulated to change colors?