How does adsorption work?

I would like to know how adsorption works particularly between a gas and a solid. I know that there is an attraction of intermolecular forces between the gas molecules and the solid surface molecules. But how can this attraction suck all the gas molecules onto the solid surface? I thought the intermolecular forces cannot act at such long distances. Any idea?

This suction is particularly true of several activated carbons because the porous surface causes a large number of active sites to pack together.

The Langmuir model is only one model. In this model once all of the active sites are filled, the gas around the surface forms a monolayer. The monolayer is expanded upon in more sophisticated models such as the BET model. The BET model is used to analytically determine BET surface area of a material like activated carbon.

Sometimes the behavior of the surface is described empirically such as in the Freundlich adsorption isotherm. In this case, as with all empirical models, there is no explanation for the attraction sucking molecules to the surface. It is simply accepted the model works.

On colliding with a surface the molecules do not necessarily bounce off because, depending on the collision energy, Van-der-Waals forces can act to hold the gas molecule close to the surface. These are typically London dispersion forces but depending on type of surface and molecule, any type of VDW force could occur. This process is called physisorption and the molecule may be slightly distorted by the surface interaction, but they are always held at a greater distance than it would be if a chemical bond were formed, typically > 4 typical bond lengths. (The energy released is comparable to the energy of condensation.)

The surface to which the gas is attracted will have atoms with unsatisfied valence. Thus it is possible that a reaction analogous to chemical bond formation can occur between the surface's atoms and the molecule. By 'analogous' is meant that there is significant wavefunction overlap from surface states to molecule. This can only happen if the molecule can escape from physisorption and so approach more closely to the surface. The sketch shows the potential energy vs. distance from surface. The enthalpy of chemisorption (250$\pm$100kJ/mol) is far larger than for physisorption (50$\pm$20kJ/mol). 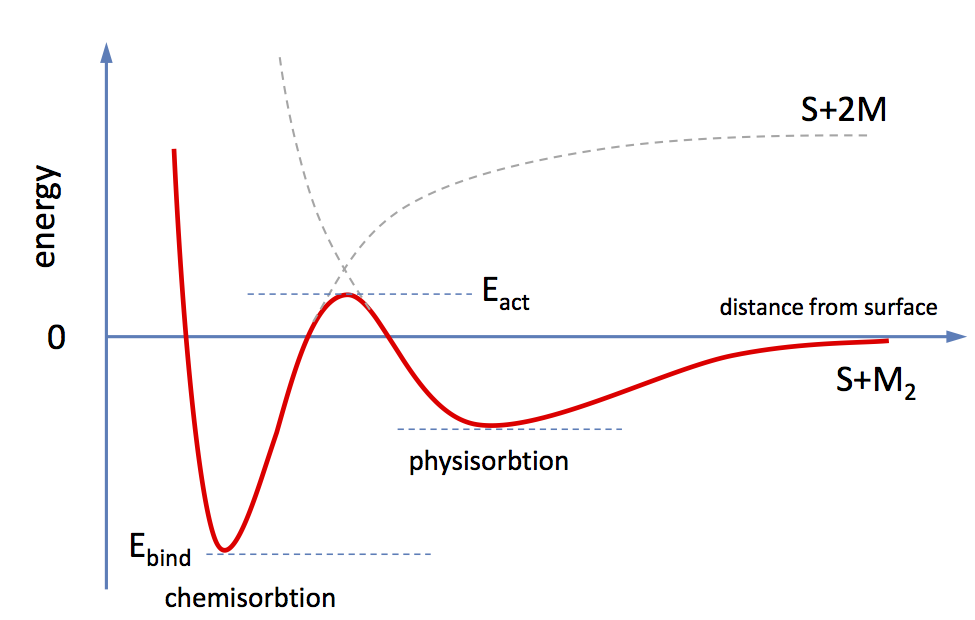 As the molecule approaches the surface the VDW forces can trap it provided that the energy released can be carried away by vibrations/phonons or electrons in the surface faster than the molecule could separate from the surface by rebounding off the repulsive part of the potential. The molecule is now somewhat trapped, the time scale for this this will depend on the size of the attractive well compared to thermal energy. To reach the chemisorbed state, a larger barrier than separating from the surface may have to be breached, so this will be an unlikely process, but not impossible, in the way the sketch is drawn. However, it is quite possible for the barrier to chemisorption to be below zero, in this case the rate constant towards chemisorption will be faster than separation from the surface. As before, the energy released on chemisorption is taken up by the surface states.
The potential forming chemisorption and that for physisorption must interact to make the potential barrier between them, this means that there has to be some symmetry elements common to both, or, put another way, there has to be some type of interaction, say spin-orbit coupling or electronic/vibrational anharmonicity to allow this to happen.

The kinetics of the on-off process is given in its simplest form by the Langmuir isotherm. See my answer to the question Is the rate of desorption dependent on pressure? for a description of this isotherm.

3
Is the rate of desorption dependent on pressure?

7
Kinetics of interstellar chemistry: Applying steady state to formation of H₂
4
How to determine Langmuir adsorption isotherm constants and use the models
2
Adsorption on surface of adsorbent
4
Does adsorption violate thermodynamics?
4
Does adsorption occur between liquids?
3
Effect of pressure on adsorption of a gas
3
Why is the IUPAC definition of adsorption so different from other definitions?