Why it is only carbons that have hydrogens attached (and not just hydrogens directly attached) to the charged carbon which result in hyperconjugation? 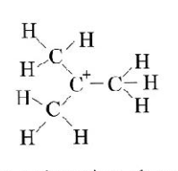 Looking at figure 2, my understanding of hyperconjugation is that carbon 2 is more electronegative than the hydrogens attached to it, and so pulls charge towards carbon 2, giving it a partial negative charge. This negative charge then stabilises the positive charge on carbon 1.

Why can't the hydrogens attached to the C+ act as hyperconjugation centres? E.g. won't these hydrogens be less electronegative than the C+ and so the C+ will attract the electrons closer to it , somewhat stabilising the positive charge on the cabron?

Hyperconjugation happens because of an overlap of orbitals.

Consider this: in (uncharged) 2-methylpropane, the central carbon has sp3 hybridisation (and a hydrogen bound to it).

When the carbocation of the image is formed, the hydrogen leaves, the hybridization becomes sp2 (hence, planar), and now there is a free pi orbital available.

Here is what causes hyperconjugation: pi orbitals are quite larger than how they are drawn in books, and they can overlap partially with the orbitals of the adjacent hydrogens, and get part of their charge.

Not the answer you're looking for? Browse other questions tagged organic-chemistry hyperconjugation or ask your own question.