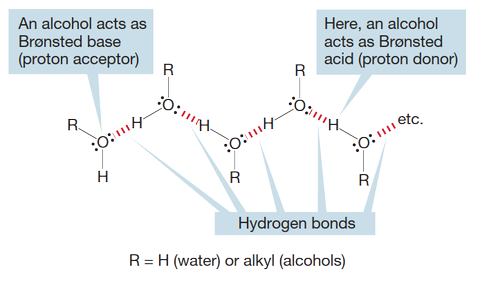 FIGURE 6.15 Water and alcohols are both Brønsted acids and Brønsted bases. This figure shows hydrogen bonding between molecules of water $(\ce{R=H})$ and alcohols.

Like, can I think of hydrogen bonding as a HOMO-LUMO interaction in general, arising from the idea that it can be classified as a Lewis Acid-Base reaction?

Yes you can think of hydrogen bonding in terms of MO theory. Consider a hydrogen bond between two water molecules as a simple example.

Thus, there are two components to be considered: the pure electrostatic attraction and the stabilization due to covalent interactions.

Because all you're asking about is the MO side of things, as explained above, hydrogen bonding can be viewed as donation of electrons into the $\pi*$ orbital of some acceptor atom. This could indeed be called a Lewis acid-base interaction, but I don't hear this very often.

I'm not sure what your textbook is talking about with hydrogen bonding being a Brønsted-Lowry reaction. Hydrogen bonding is not a reaction (in the traditional sense) so I would disagree with your textbook. The acceptor oxygens are accepting electrons much more than they are accepting the whole proton which would make them Lewis acids. It's certainly possible for water/alcohols to behave as either Lewis acids or bases and Brønsted-Lowry acids or bases, but the former is much more common based on the fact that auto-ionization is quite a small effect but hydrogen-bonding is a very large (and common) one.

Regarding the MO view of things, the exact same logic can be applied in inorganic chemistry when considering carbonyl compounds or dihydrogen/dihydride compounds. In that case the donation of electrons into a $\pi*$ orbital (or $\sigma*$ orbital in the case of dihydrogen compounds) is internal to the molecule however and we call it backbonding.

Here's an MO and orbital diagram showing that interaction.

The ionic (electrostatic) contribution accounts for approx 65% of the bonding, with charge transfer more important for shorter bonds (<0.28nm) and ionic contribution for longer bonds.

$^*$ Jeffrey, 'An introduction to hydrogen bonding'

In fact, yes. It can be explained by a HOMO-LUMO interaction. I am currently running NBO (natural bond orbital) computations for a theoretical study of hydrogen bonds in some models. And NBO interprets hydrogen bond as the donation of electrons from the lone pair (non-bonding electrons) of the hydrogen acceptor to the (LUMO) antibonding orbital of the hydrogen donor.

For example LP1 O--- BD* (O--H) This means that there is a donation of electrons from one lone pair (LP) of oxygen (which is in a non-bonding orbital) to the antibonding (LUMO) orbital of the O-H bond. Interestingly, I just found out that there can be a type of hydrogen bonding between a lone pair of oxygen and C-H as the hydrogen donor. In some old papers in the literature, it is referred to as weak CH/O hydrogen bonds. (10.1021/ma0485585)

I hope that this is enlightening.

Not the answer you're looking for? Browse other questions tagged organic-chemistry acid-base molecular-orbital-theory hydrogen-bond or ask your own question.