In a textbook it says it's a chemical reaction which involves breaking bonds. But I don't think so since I think water molecules are just trapped in the crystal. What's the right answer and why ?

Copper II forms many types of complexes with water. The aquo ion is $\ce{[Cu(H2O)6]^{2+}}$ where the oxygen ligates to the metal atom. The structure is a distorted octahedral one, two bonds are longer than the other four. (The Jahn-Teller effect$^*$ is behind the fact that two ligands are not bound as strongly as the other four). It is possible with ammonia to form various hydro complexes; $\ce{[Cu(NH3)(H2O)5]^{2+}}$... $\ce{[Cu(NH3)5(H2O)]^{2+}}$. Similar complexes form with chloride ions. Copper sulphate is coloured in solution (due to $\ce{[Cu(H2O)6]^{2+}}$ ion) and in the crystal; the anhydrous crystal is colourless and this seems to indicate that the waters are bound, due to metal to ligand transitions, as in other transition metals. (The reason that sulphate is not significantly bound to the copper in aqueous solution, as it is in the crystal, is due to the vast excess of water (water is 55.5 M) which will displace the sulphate.)

In the crystal of $\ce{CuSO4.5H2O}$ the metal is, as usual, 6 coordinated, with four water oxygens in the plane and one oxygen from a sulphate occupying each axial position. The extra ($5^{\text{th}}$) water molecule is hydrogen bonded between the second oxygen of the sulphate and a bound water molecule in the plane. This same water's oxygen is also $\ce{H}$-bonded to a sulphate oxygen bound to the next $\ce{Cu}$ atom. The $\ce{H}$ bonds are not quite of equal length 0.287 and 0.294 nm respectively. 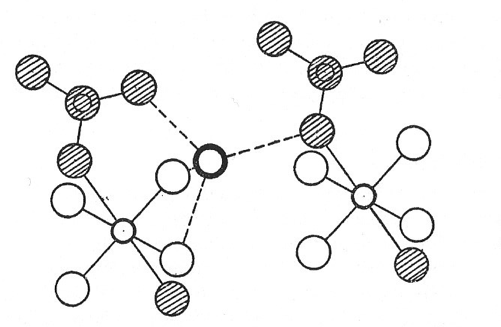 So bonds are broken, $\ce{Cu}$ to oxygen, also oxygen to oxygen and oxygen to sulphur hydrogen bonds as water is removed.

$^*$ The Jahn Teller theorem shows that any non-linear molecule in a degenerate state will undergo a distortion which will lower its symmetry and split the degenerate state. The theorem does not indicate what the distortion will be, or how big it will be. Nevertheless it is extremely important in describing the geometry of metal complexes.

If water was acting as ligands and went from a complex to individual molecules, then it would be a chemical reaction.

There is no way to tell the difference without experience if that was the only expression explaining the compound.

There are more exact methods of expressing complex ions.

The nomenclature infers this is water of crystallization. Thats what the "dot" means.

This water is en-trained in the crystal structure.

The process of sublimation drives of the water (with heat for instance) and the crystal degrades. This change of state is a physical one, however there can be complex things happening at the molecular level in some systems such as organics that.

What you have here is Chem 101 - no chemical change for the context of the question.

If this was not water of crystalization, then the O would all be noted together in the formula, something like CuH10SO9. The other contributors are assuming there is a chemical change, but have missed the other information inferred by the notation.

I've thought about this same question quite a bit in the past and have come to the conclusion that there isn't really a single concrete answer. If you consider the hydrate and the anhydrous to be distinct compounds, then yes, this would by definition have to be considered a chemical reaction. The hydrate and the anhydrous compound have different physical properties, with color being the most obvious difference. However, I generally view this process as a physical change. The hydrate is, in essence, an ionic compound with water molecules contained within. On strong heating, you ultimately end up with exactly the same compounds which you began with; the only thing that has changed conceptually is location.

It seems to me that if you are going to consider this process a chemical change, then you must also consider dissociation of an ionic compound in solution as a chemical change. I don't think I've ever heard anyone try and make that argument before. While dissociation clearly involves interactions between the solvent and ions, the overall process is widely considered to be a physical change.

This discusses crystalline solids. The difference between bound and unbound is not a dichotomous yes/no issue. Interatomic distance between two atoms may vary continuously from clearly bound to dispersively bound to unbound. If the interatomic distance between two atoms is significantly less than the sum of their van der waal radii, then it is assumed they are chemically bound. In answering the question about CuSO4.5H2O, all you need to do is identify each of the 15 atoms of the water molecules and determine (ignoring intramolecular distances) each of their closest neighbors and compare those minimum interatomic distances to the Van der Waals distances. I'm pretty sure you'll find distances substantially less than VdW for most, if not all, of the 5. [An alternate technique is to map the 3D electron density in the crystal, but I view distances as being 'cleaner' and hence more definitive.] To repeat one of my main points, it is often the case that interatomic distances are intermediate between a "full" covalent bond and just dispersive interaction. You may have two atoms 22.3% bonded, for instance. Hypothetically, since I've not studied the pentahydrate you ask about, what if the 5 waters are 0%, 20%, 40%, 60%, and 80% bonded, respectively? Perhaps a more useful answer for a novice is to ask whether the water molecules occupy definite positions in the crystal structure. If they are distributed randomly, then describing them as (physically) trapped might be justified. The implication is that the stoichiometry can range from 0 up to a maximum occupation (say 5) and this is NOT what we have for the pentahydrate; the water occupy specific locations in the crystal structure and their loss destroys the crystal structure. Making them much more than physically absorbed.

0
Liquid crystal current flow
2
XRD-Shorter distance between planes than actual radius of atoms/or cell parameter
7
Why does ice freeze the way it does?
3
How to make sense of the crystal systems names
5
Why does oxalic acid have exactly two water molecules of crystallization?
1
What is the Difference between Menthol Crystal and Menthol Powder?
3
Miller indices: How does one translates the orientation to the origin of the unit cell?
3
Struvite Crystals: How does it form?
6
How to understand the chemical formula of Prussian blue complex w.r.t its crystal structure?