Is there a way to fine tune a laser to excite the electrons of a particular molecular bond into dissociating?

I don't know if this makes any sense, but I came up with this in my head: if each molecular bond in any molecule had a specific *signature wavelength of dissociation", this would be the exact wavelength of the laser beam necessary to excite the electrons involved in that one particular bond and no other bonds in the molecule into dissociating homolytically. Is this theoretically sound in any way?

Obviously if you have a diatomic then yes, you can put energy in and the bond will break. There are three cases; (a) as long as the photon has enough energy it can excite a dissociative excited state, (grey in sketch) that is a state that is only repulsive. The absorption is continuous here so its energy has to be above a certain value. (b) The second case has a curve crossing in the excited state. This means that two excited states cross , a bound state and a dissociative one. Then if you hit the energy at the crossing point, dissociation will occur, but not at higher or lower energy. This is called pre-dissociation. (The read & grey line crossing show pre-dissociation). It occurs in many molecules not just diatomics, e.g. benzene. (c) The third case is when a bound state is excited above its dissociation limit, e.g. above approx 10000 in the blue curve, 5500 on the black curve . However, reaching these energies may be hard because the Franck-Condon factors may be vanishingly small. (roughly speaking the FC factors ensure vertical transitions) 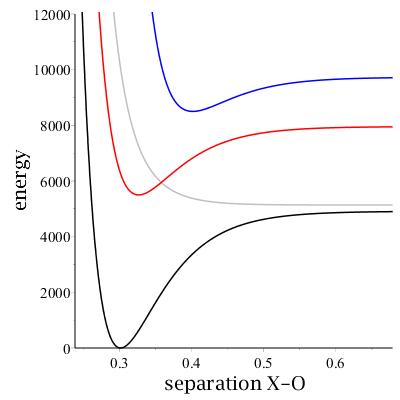 Now the case with polyatomic molecules is tricky. Many experiments have been tried with varying success, the area is sometimes called 'mode selective chemistry' and/or 'coherent control'.

In a molecules there are many vibrations, called normal modes. Although we think generally of one bond vibrating, in actuality many bonds vibrate in unison (i.e. in a fixed phase relationship) in a normal mode. These modes are governed by the symmetry species of the molecule. Each normal mode is supposed to be orthogonal, so that vibration of one does not effect vibration of another. But in fact vibrational anharmonicities allow vibrational quanta to flow from one mode to another. Thus exciting one normal mode soon involves energy spreading out into all other modes and thus even if there is enough energy to break a bond it soon becomes diluted.

In coherent control experiments one uses one or more very short light pulse ( < 100 femtoseconds) to excite the molecules but control the phase of the light (hence pulse shape) to control how long the molecule takes absorb the photon. This is done in the hope that once the energy starts to spread out (as a vibrational wavepacket) it can be controlled to end up in just the bond you want to break, i.e. to try and use the vibrational spreading out tendency to advantage. The pulse shaping is done using an electro-optic or acousto-optic device in a feedback loop using say, a genetic algorithm linked to a detector that observed product formation.

Not the answer you're looking for? Browse other questions tagged bond molecular-structure photochemistry or ask your own question.

17
What utility does the Tau bond model of orbital overlap have?
2
Can fluorescent & phosphorescent molecules still be fluorescent or phosphorescent as ions and not as salts?
2
Is there a particular reason for the way these structures are represented?
13
Are carbocations necessarily sp2 hybridized and trigonal planar?
14
Is light a reactant in photochemical reactions?
3
Deciding which group twists out of the plane when ortho effect takes place