What does an endpoint saturated signal mean. How does it relate to equilibrium constant?

I have had a question that has been bugging me for a couple of years in my graduate school career, and I was wondering if perhaps someone could help explain it to me. Given an endpoint assay like this one I've shown below (an ELISA assay, but I assume it could work for any endpoint), how does the endpoint signal (the signal at the highest concentration) relate to binding? And how does $EC_{50}$ (the concentration between the maximum and minimum signal) relate to the equilibrium constant? 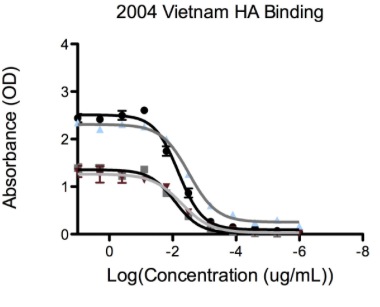 For years, biologists have used the $EC_{50}$ to give a rough approximation for the equilibrium binding constant $K_d$. However, it always bothered me that all curves features on the graph could produce nearly the same $EC_{50}$, but with different levels of maximum absorbance. For instance two of the curves are saturated at around 1.2 and the others are around 2.5.

Do all of these curves have roughly the same $K_d$, or is it worrisome that we don't get equivalence signal for the maximum concentrations?

$EC_{50}$ is concentration of a bioactive molecule which gives half the maximum response. You should note that the response is bound by a maximum which means this dose-response curve follows a saturation kinetics.

Saturation kinetics can be modelled in many ways and Hill and Michaelis-Menten kinetics are the most commonly used models in biochemistry. Again, a point to note is that many mathematical functions/models do not explain the underlying mechanism. They just mimic the behaviour of the system.

Lets assume that the antibody-response follows a two-step kinetics like Michaelis-Menten.

Lets call $R_{max}$ as the maximum response rate. Like in the case of MM kinetics, the response rate $R$ would be (see the wiki page for the derivation):

Now, what $K_m$ really is depends on the approximation of the model:

This would also apply for the Hill kinetics in which response can be described as:

where $n$ is an integer which represents co-operativity in binding i.e. one bound antibody enhances the binding of the next (total number of binding sites is the upper bound of $n$).

Note that equilibrium model may not be applicable for drugs that can get consumed in a reaction. Also, not all drug induced reaction would follow this simplified model. There are other models for co-operative binding too.

Therefore, before concluding anything about kinetics from an empirical measure like $EC_{50}$, we need to understand (or at least assume) the underlying model.