What does lowercase r-s notation mean?

I came across a naming convention which I haven't seen before. I let ChemDraw name the following compound for me and got a name containing lowercase "r" and "s" configurations. 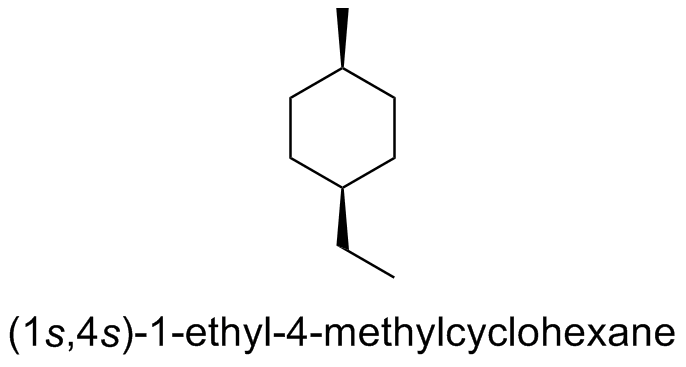 Can someone tell me what this means and something about the actual convention behind it? I think it must have something to do with rings and maybe with some kind of "pseudo-chirality" due to a certain conformation of the ethyl group which is attached to the ring, but I'm only guessing.

The preferred IUPAC name for the corresponding trans isomer is (1​r,4​r)-1-ethyl-4-methylcyclohexane.

In general nomenclature, according to Subsection P-93.5.1.2 of the current version of Nomenclature of Organic Chemistry – IUPAC Recommendations and Preferred Names 2013 (Blue Book), the stereodescriptors 'cis' and 'trans' may be used to denote the relative configuration of substituted monocyclic compounds.

The stereodescriptors 'cis' and 'trans' are used to show the relationship between two ligands (atoms or groups) attached to separate atoms that are contained in a ring or a ring system. The two ligands are said to be located 'cis' to each other if they lie on the same side of a plane. If they are on opposite sides, their relative position is described as 'trans'. The appropriate reference plane of a ring or ring system (the ring being in a conformation, real or assumed, without reentrant angles at the two substituted atoms) is the mean plane of the ring(s). The stereodescriptors denote relative configuration; the absolute configuration must be described by CIP stereodescriptors such as 'R' and 'S'.

According to Subsection P-93.5.1.1.1, the absolute configuration in substituted monocyclic compounds shall be described by Cahn-Ingold-Prelog (CIP) stereodescriptors.

In substituted monocyclic compounds the absolute configuration is specified in preferred IUPAC names by the CIP stereodescriptors such as 'R', 'S', 'r', and 's'.

This rule explicitly applies to achiral cyclic compounds, too.

The configuration of achiral cyclic molecules is also specified by CIP stereodescriptors in preferred IUPAC names.

(a) 'R' and 'S', to designate the absolute configuration of tetracoordinate (quadriligant) chirality centers;

(b) 'r' and 's', to designate the absolute configuration of pseudoasymmetric centers;

The 'pseudoasymmetric' is defined in Subsection P-92.1.1 (d) as follows.

The same principle applies to (1​s,4​s)-1-ethyl-4-methylcyclohexane, which is given in the question.

The two halves of the 1,4-disubstituted cyclohexane are nonsuperposable mirror images of each other. Therefore, the compound contains two pseudoasymmetric centers, which are invariant on reflection in a mirror ('1​s,4​s' remains '1​s,4​s').

Although this case is explicitly mentioned in the Blue Book, it may not be obvious how to choose the stereodescriptors 'r' or 's' for 1,4-disubstituted cyclohexanes. The ranking is a complex process and requires the use of auxiliary descriptors.

The constitutional formula of a cyclic molecule is transformed into an acyclic digraph according to the methodology that is described in Subsection P-92.1.4.3 and which has been recommended by Prelog and Helmchen.

In order to obtain the acyclic digraph of a stereogenic unit, the didentate ligand (i.e. the ring) is transformed into two monodentate ligands by leaving intact in each case one bond with the core of the stereogenic unit and cleaving the other bond. At the end of each of the two branches thus obtained, a duplicate atom of the core is attached. (Note that this methodology is similar to the case of multiple bonds.) For example, for the pseudoasymmetric stereogenic unit at the atom numbered '1' of (1​s,4​s)-1-ethyl-4-methylcyclohexane:

As the digraph is acyclic, it is now possible to specify the stereodescriptor 'R' or 'S' for the stereogenic unit at the atom numbered '4', which is carrying the methyl group, in each branch. These are auxiliary descriptors that are different in each branch.

Since the auxiliary descriptors are different, they allow the branches to be ranked using Sequence Rule 5, which states that 'R' has priority over 'S'.

Therefore, the configuration of the pseudoasymmetric stereogenic unit at the atom numbered '1' of (1​s,4​s)-1-ethyl-4-methylcyclohexane can be determined to be 's'.

In the same way, the configuration of the pseudoasymmetric stereogenic unit at the atom numbered '4' of (1​s,4​s)-1-ethyl-4-methylcyclohexane can be determined as 's'.

Therefore, the complete configuration of (1​s,4​s)-1-ethyl-4-methylcyclohexane, which is given in the question, is indeed (1​s,4​s).

This notation is used to designate so-called "pseudoasymmetric carbons." This occurs in instances in which precisely two of the groups bonded to a tetrahedral carbon are structurally indistinguishable in terms of connectivity (i.e., the same atoms, bonded with the same multiplicity, and in the same order moving outward from the carbon whose absolute configuration is being assigned), but contain chiral centers which have opposite configurations. See the IUPAC Gold Book entry on pseudo-asymmetric carbons.

As for the molecule in your example, it is named incorrectly. There is an inherent symmetry present in 1,4-disubstituted cyclohexanes that prevents them from being chiral (except in cases where the substituents on the ring themselves contain chiral centers, which methyl and ethyl groups do not), and without any chiral centers in the molecule, there obviously can be no pseudoasymmetric carbons either. I would add, however, that cis/trans isomerism is, of course, possible for 1,4-disubstituted cyclohexanes, but that's entirely different from the property of chirality. The only stereochemical designator that could reasonably be added to the molecule from your example is "cis-".

17
Number of diastereomer pairs of 1,3-dichloro-1,2,3-triphenylpropane

14
What does the eta notation mean in the naming of a transition metal complex?
4
Stereochemistry: R and S notation
20
What does dl- mean in nomenclature
2
For isomers, what does the term "connectivity" mean?
6
Lowercase "a" in organic chemistry nomenclature?
0
What does the prefix tetrahydro mean?