I was watching a chemistry video lecture today and I came across this:- 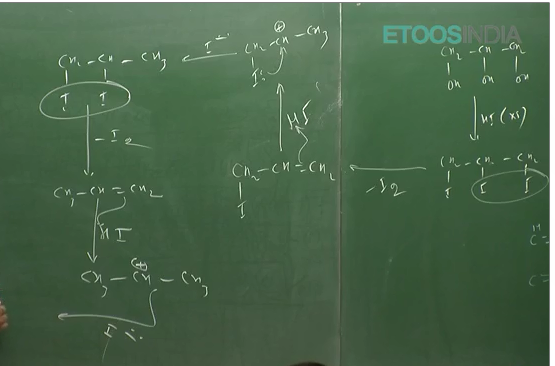 Basically the lecturer was illustrating the mechanism of reaction glycerol with $\ce{HI}$.See from right to left(follow the arrows :-P) in the screen shot.I have a doubt in the fourth step where it is shown by an arrow that the $\ce{I^-}$ ion shifts from terminal position to the central position therby forming a positive charge at the terminal position where another $\ce{I-}$ attacks.He says something like "The $\ce{I-}$ shifts to central position due to areal resonance(or something like that..hope I heard that word correctly) which increases stability".

Now that's my doubt!Why should the iodine ion shift its position at all?Isn't the positive charge more stabilized by hyper conjugation in the central position?And what on earth is areal resonance(I searched google too but no use)? Can someone help me out ?Thanks in advance!

The iodine isn't changing positions, it's donating a pair of electrons to stabilize the charge by forming an iodonium ion similar to the bromonium ion formed during the halogenation of an alkene shown below. You can see that the bonded pair of electrons was not affected by the step. It looks like they confused the reaction by short-cutting the reaction step.