I have read: "It is crucial that the leaving group be able to stabilize the additional electron density that results from bond heterolysis"

Where heterolysis means "bond breaking in which the bonding electron pair is split unevenly between the products."

So is this stabilization referring to stabilizing the charge on the $\ce{Cl-}$ ion in the above example? Does it just mean it is easier for something that can become stable to leave?

Does being more stable equate to being closer to neutral charge, or has it got something to do with steric hindrance ("steric hindrance occurs when the large size of groups within a molecule prevents chemical reactions that are observed") preventing reactions?

Another issue I have with this is why are more electronegative atoms better at stabilizing charge?

To answer your second question, more electronegative atoms are generally better at stabilizing negative charge because, by definition, electronegative atoms have a greater tendency to attract electron density. However, it is not only the electronegativity of an atom which determines its leaving group ability, but also its size. If an atom is larger, then it means the electrons will be spread out over a larger volume, which is more energetically favorable. This is one reason why iodide is a better leaving group than bromide, even though bromine is more electronegative than iodine. In addition, iodine is larger and it forms weaker bonds than bromine with other atoms due to poorer overlap of atomic orbitals, meaning it is easier to break iodine bonds (e.g. the bond dissociation energy is 284 kJ/mol for Br$-$CH$_3$ versus 232 kJ/mol for I$-$CH$_3$ at 298 K). Because iodine bonds are easier to break, it is easier for iodine to "leave" the molecule and is thus a better leaving group.

Along this same line of reasoning, fluorine, being very electronegative, can form a very stable anion, but it forms very strong bonds which are difficult to break, and fluoride cannot leave if the fluorine bond doesn't break. That is why fluoride is a poorer leaving group than the other halogens.

As mentioned above, the more electronegative atoms may not be the better leaving group.

If you take the example of the halogen family, fluorine is not a better leaving group compared to bromine and iodine even though fluorine is more electronegative than the other members of its family. 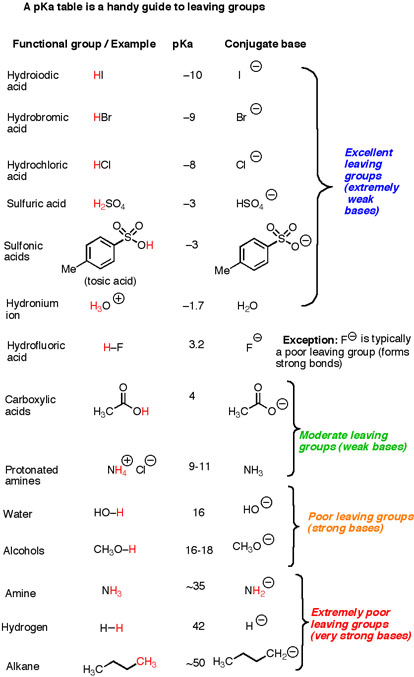 -2
Why in SN1 reaction the order of reactivity of alkyl halides increases from fluorine to iodine?

6
Why are double bonds at more substituted carbon more stable?
2
why are halogens considered deactivating groups while methoxyl groups are activating?
22
How are SN2 transition states stabilised by adjacent double bonds and carbonyl groups?
1
Do polarizability and electron delocalization have analogous effects on leaving groups?
8
Which of these carbocations are more stable?
4
Why is a Grignard reagent not protonated by chloramine?