I've noticed a phenomenon in the EI-MS spectra of aliphatic aldehydes. Many of them show a significant peak (sometime it's even the base peak) at $M-28$.

To my best understanding, the only thing that can explain this – and is common to all aldehydes – is removal of the carbonyl $\ce{C=O}$ group.
However, I fail to understand the chemistry behind this. How can the $\ce{C=O}$ disconnect, while the aldehyde hydrogen stays – somehow replacing the entire group (forming a new $\ce{C-H}$ bond)? Or am I missing something and this is not actually removal of the $\ce{CO}$? 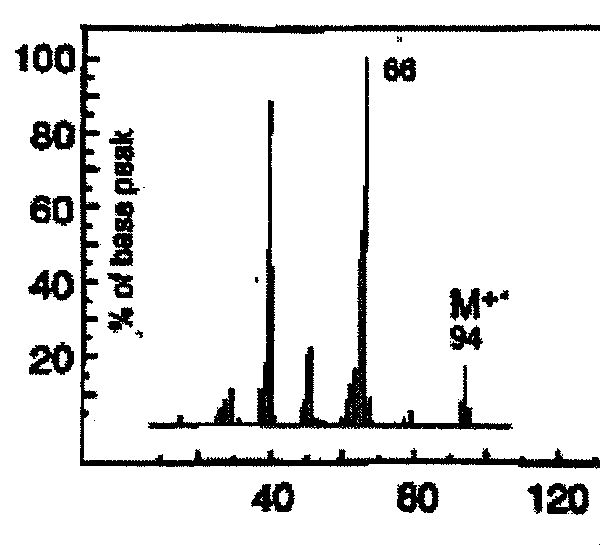 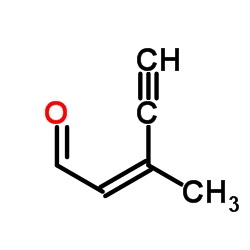 This is indeed a quite intriguing question. Thus I am afraid that my answer will be mostly incomplete and quite speculative on some aspects.

First of all, book and litterature searches lead to find that this M-28 loss for aldehdyes is mostly attributed as a loss of ethene and not CO. This can be traced back to the 1957 article by Gilpin and McLafferty which describes the EI fragmentation of straight chain aliphatic aldehydes. In the article, they demonstrate, through $\ce{^{18}O}$ labelling of the aldehyde, that it is a neutral ethene loss and not a $\ce{CO}$ loss. I did not find a clear proposal for a mechanism leading to this ethene loss, but as it occurs on long straight chain aldehydes, I would tend to favor a mechanism occuring through multiple $\ce{H^{\bullet}}$ migration within a series of isomeric distonic ions following the scheme, taking hexanal as an example:

But of course this is not sufficient in the case of the example that is the initial question, as there is no terminal ethene loss possible. I wondered if it would apply for other aldehydes, and I was not long to find in the NIST database terminal branched aldehydes (such as for example 5-methylhexanal, for which the EI spectrum is available here) that also lead to a strong M-28 peak, which obviously cannot be obtained through the above mechanism: one would expect a M-42 peak which happens to be present, but with a similar intensity to that of the M-28 peak.

And now we enter the speculative part. Someone with access to a high resolution mass spectrometer and a collection of aldehydes could easily identify if the M-28 is loss of $\ce{CO}$ or of ethene. I will assume that in the case of the question, as well as in the case of terminally branched aldehydes it is a loss of $\ce{CO}$, but this should be experimentally checked. (If someone also finds a reference to high resolution spectra showing loss of CO, please edit this answer accordingly.)

In the case of the (2​Z)-3-methylpent-2-en-4-ynal, as well as other aklene aldehydes, one could probably explain the loss of CO as a $\ce{H^{-}}$ (hydride) migration from the carbonyl carbon towards an ionized double (or triple bond), followed by a loss of $\ce{CO}$, following the mechanism:

This mechanism leads to the formation of the methyl-methylenecyclopropene ion. According to Shay et.al, the ionized methylenecyclopropene ion is the most stable structure for these types of ions, but it could also produce any of the isomers, so I chose to start with a 1,5 hydride shift, although other hydride transfers could work out fine.

Although satisfying for the initial question, this does not address the case of the branched aliphatic aldehydes, for which no hydride transfer can lead to the formation of a carbonyl group before cleaving the carbonyl - carbon bond. Considering that the final product is in this case an ionized alcane, the mechanism for the rearrangement cannot proceed through a final bond cleavage which would lead to a bond deficient (unsaturated) system. Somehow, the system has to go through a partially bonded state at one stage. The following proposal could work out:

Initially, the system proceeds though standard α bond cleavage which would usually lead to formation of the m/z 29 $\ce{HCO^{+}}$ ion (present in small abundance in the original question as well as in most aldehyde spectra). An ion-neutral intermediate complex is formed in some instances (although eventually the two steps might be not absolutely separated), which can lead to a proton transfer between the $\ce{HCO^{+}}$ ion and the alkyl radical. This transfer is thermochemically favorable and would lead to loss of $\ce{CO}$.

Point in favor of this hypothesis are: 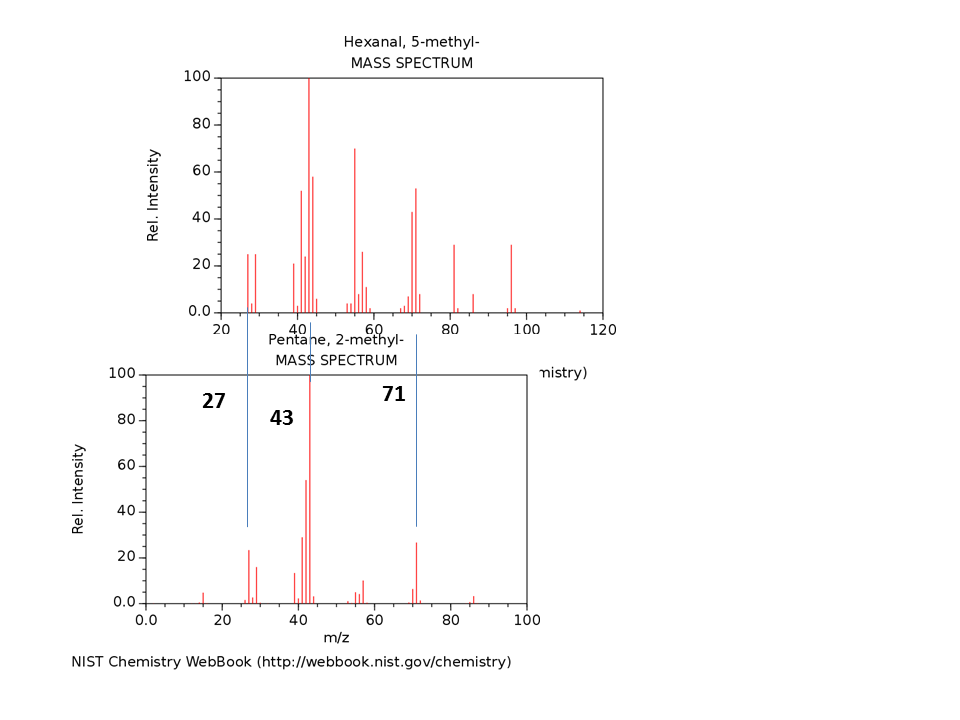 A concern with this hypothesis is that a proton transfer to a radical is not a well established process. Indeed, formation of an ionized alcane leads to an ion which cannot be directly represented using standard Lewis notation, which makes writing mechanisms involving this species a bit worrisome.

The second problem is that although ion-induced dipole interactions are not negligible, the binding between $\ce{HCO^{+}}$ and the alkyl radical is likely to be weak compared to other ion neutral complexes. Thus its lifetime might be too short to allow a proton transfer step.

Further work on this subject should, in my opinion, try to focus on, (i) experimental validation of the loss of CO, and ideally, using D-labelled compounds validate the hydrogen transfer hypothesis. MS/MS fragmentation of the M-28 ion would also allow validation that an ionized alcane is indeed formed in the process. Finally, the mechanism should be validated through some theoretical calculations, at least for the formation of an ion neutral complex and for the barrier (and ideally RRKM kinetics) for the proton transfer within the ion neutral complex.

1
Mass Spectroscopy peak assignments in but-3-en-1-ol
2
What is the significance of an organic compound's M peak?
3
Why would the 2+ molecular ion of butane have a mass spectrum peak at 29?
1
Minimum resolution to acquire exact mass on a spectra from m/z peak
1
GCMS Peak Identification: Online or Open Source / Free Programs?
0
How small a peak could one identify by GCMS
6
What is the relative size of the (M+2) peak?
7
Why is a very small peak with larger m/z not considered to be the molecular ion?
2
What do we learn from an isotope peak (or M+2 peak) in a mass spectrum?