I guess dipole interactions have the biggest influence here. They somehow destabilize the reversion of the oxaposhpetane to the betaine and prevents formation of the more stable E isomer but I am not sure.

As you hopefully realise, the stereochemical outcome of the HWE reaction (and variations) is due to the relative orientation of the R-groups in the phosphaoxetane intermediate.

If the R groups are syn as in 5A then the (Z)-olefin is formed, with an anti arrangement 5B favouring the (E)-olefin as the product.

As it turns out, the initial 'aldol' addition into the aldehyde is rate determining, with the anti addition being favoured over the syn addition on steric grounds. 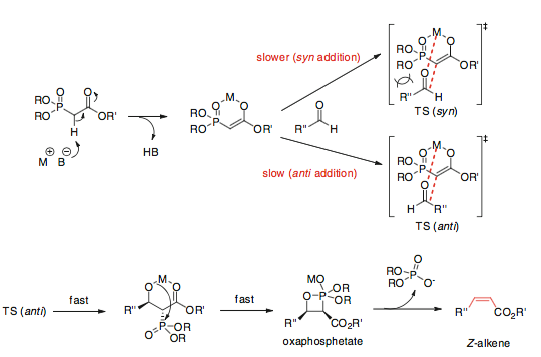 Once the aldol addition has taken place, the subsequent steps are rapid due to the high electrophilicity of the Still-Gennari phosphonate (with the additional electron withdrawing groups).

This means that the entire process is essentially controlled by the initial addition to give a syn or an anti adduct. Once formed, the adducts are sufficiently short lived that despite the cis phosphaoxetane being less favoured due to the clash between R-groups, the (Z) olefin is formed via quick and irreversible elimination.

The HWE therefore is (E)-selective, in part, due to the fact that elimination is less rapid and as such there is equilibration to the more favourable phosphaoxetane from which elimination may occur.

I am not convinced by the transitions states given in "Stereoselective Alkene Synthesis" because they rely on chelation to restrict the conformation of the phosphonate anion AND the orientation of the aldehyde.

And yet, the reaction conditions are KHMDS/18-crown-6 which are clearly designed to eliminate the possibility of coordination to the potassium cation and maximise the rate of addition of the "naked" alkoxide anion to the electron deficient P.

3
Why does carbocation stability increase in the order 1°, 2°, 3°?
30
Why does the unstabilised Wittig reaction selectively form cis alkenes?
7
Why do Allylic Halides prefer SN2 reaction over SN1?
2
Why is pyridinium chlorochromate selective compared to chromate, dichromate etc.?
0
Why does sulfonation of aniline occur para rather than ortho?
7
Why do stabilised ylids lead to trans alkenes in the Wittig reaction?
1
Percentage of trans-stilbene traces in cis-stilbene H NMR
2
How would this reaction look like in a potential energy diagram? (SN1 Reaction)
0
Why does methyl not shift in the mechanism of isoborneol to camphene?