Humans typically achieve combustion by starting a chemical reaction of a fuel (often a carbon $\ce{C}$ containing fluid like methane $\ce{CH4}$), which is is brought into an an oxidizer (a gas containing $\ce{O}$, like air). For example, when you turn on a lighter.

What would happen if the situation were turned around?

We have an open space entirely filled with fuel and we let in some oxygen-containing fluid. How would the combustion look?

I know the (adiabatic?) temperature maximum of a flame will be achieved at conditions which are slightly on the fat side. But I have no idea how, for example, the production of unburned $\ce{C}$'s, soot production and so on, would look.

There are different type of combustion that you can talk about. For example when you mix fuel and oxidizer before burning them, it is referred to as premixed system. For example a gas cooking range, gas turbine engines, IC engines, etc. On the other hand if you do mix the fuel and oxidizer you get what's called a diffusion system. For example a candle flame, flame thrower, apartment fires, etc. Typically premixed systems will produce a blue flame, whereas diffusion systems will produce yellow-orangish flame.

So in both the cases we would expect to see same amount of $\ce{CO2}$ and $\ce{H2O}$ begin produced when same amount of fuel is burnt. That doesn't sound interesting at all. Plus our ideal situation ignored the effect of heat produced and its effect on the surrounding. What happens when we take this in account?

Well in most methane systems it is very difficult to produce soot, so let us consider something like propane $(\ce{C3H8})$ or higher order hydrocarbon (anything with more carbon atoms), which is more likely to soot. Soot is produced when unburned $\ce{C}$-atoms combine to form larger molecules, which combine to form particles. How soot is produced is still an active research area. But we do know that most soot is produced at relatively low temperatures (compared to the flame temperature) in fuel rich regions.

In a candle/lighter flame the soot is produced near the wick, but most of it is oxidized as it reaches the flame. Only some close to the center escapes from the tip because there is not enough oxidizer there to burn it all. This is the main reason diffusion flame appear yellow.

Now imagine your lighter which starts off with oxidizer in the center, there won't be any soot particle inside the flame. So the flame will appear bluish. But the heat produced from the flame may be enough to break (pyrolyse) the fuel in the surrounding region. This will cause soot to be produced. Also because there is no reason for the soot to approach the flame it will not get oxidized easily and you will be left with a lot more soot.

The unburned $\ce{C}$ forms the soot. A side effect is production of $\ce{H2}$. So now not only will you see more soot, there will be excess hydrogen too. Also in case of higher hydrocarbon fuels you might see some pyrolyzed fuel which is yet to form soot or get oxidized fully.

As mentioned earlier in diffusion flame systems, the flame is around where there is just the right amount of fuel and oxidizer. The products formed at the flame diffuse out (into the fuel and oxidizer) and since there is scarcity of oxygen, $\ce{CO2}$ will get reduced to $\ce{CO}$ i.e. you will see increase in $\ce{CO}$ production and decrease in amount of $\ce{CO2}$.

Side note: Saturn's moon Titan has an atmosphere which primarily consists of nitrogen (98.4%). The next abundant gas is methane (1.4%) followed by hydrogen (0.1-0.2%). So it's not a bizarre world after all.

I'll leave the science fiction/fantasy to more creative contributors, but I think your conditions can be replicated in our not-so-bizzaro world (although those over at the Chemistry World Blog might be able to convince you that our world is a bit bizzare).

If you returned from watching some videos, consider the following chemical equation:

This is clearly a combustion reaction with two reagents: a fuel, $\ce{CH4}$, and an oxidant, $\ce{O2}$. It is important to emphasize that the reaction requires both reactants in order to go to completion. If we look closely at the stoichiometry, we require two molecules of oxygen for every one molecule of methane. The question posed was

If we have an open space filled with fuel, and a little amount of oxygen is added, what would it look like? 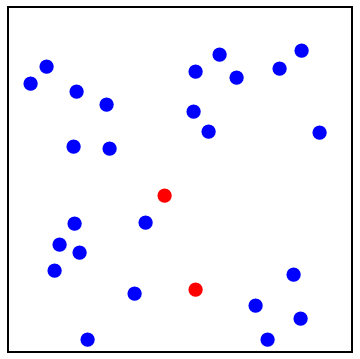 Here, the blue dots represent $\ce{CH4}$ and the red dots represent $\ce{O2}$. There is an excess amount of methane (fuel) for the amount of oxygen (oxidant) in this box. In General Chemistry class we refer to this as a limiting reagent problem. The oxygen is a limiting reagent, and the reaction will only go on so long as there is a sufficient amount of both reagents. When all the oxygen is used up, we have this: 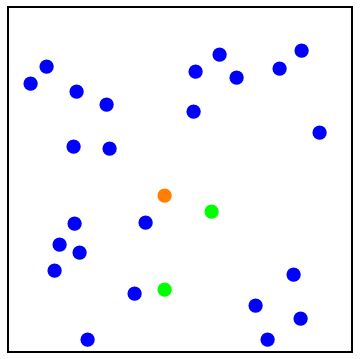 Here the orange dot represents $\ce{CO2}$ and the green dots represent $\ce{H2O}$. Nothing else is likely to happen at this point. So getting back to your question, what would this world look like? Well it would look a little wetter and a little hotter.

To add to the previous answers, for a real-world example look no further than your average rocket engine. Especially hydrogen/oxygen engines are run fuel-rich; at stoichiometric rato the chamber temperature would be too high and the combustion gases too reactive for the engine to survive.

2
What causes transition from smoldering combustion to flame combustion?
1
Can oxidizing agents be used to increase the combustion efficiency of waste oil?