For the following compound 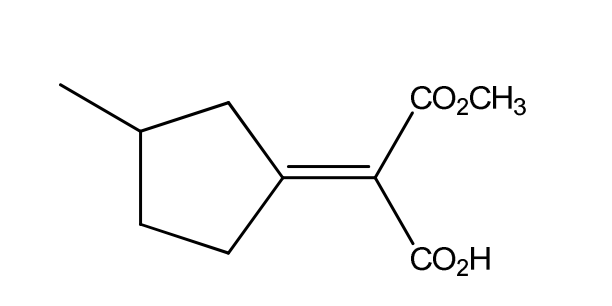 Right hand side of double bond: $\ce{CO2CH3}$ is highest priority due to the extra carbon (as we work along both chains)

But for the left hand side oft he double bond I am stuck.

I thought maybe we take the blue path, and as there is 3 carbons as opposed to 2 on the orange path, the blue path is the highest priority : 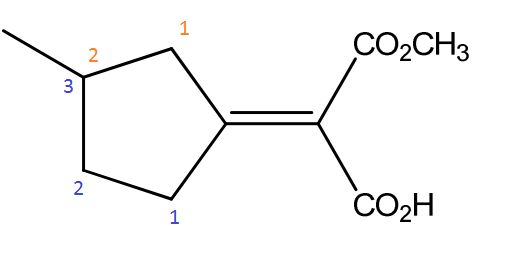 But my book gives the opposite answer : 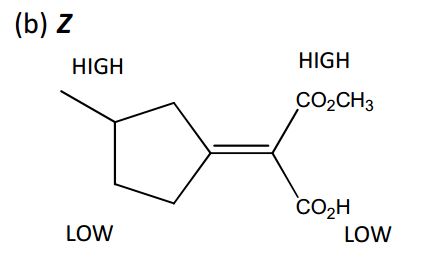 There is a similar question here How to assign E/Z configuration according to the Cahn-Ingold-Prelog rules when subsituents differ only by stereochemistry but in the case of my question the carbons on the cyclo which are directly after the double bond do not have groups attached.

The reasoning you have used is clearly faulty as there is no meaning in assigning more number of carbon to one end in a cyclic system.

Just look at the both the branches you have marked using orange and blue. The logic followed is in accordance to Cahn-Ingold-Prelog(CIP) rules.

Hence the Z-nomenclature as answered in the book.

Not the answer you're looking for? Browse other questions tagged organic-chemistry nomenclature stereochemistry geometrical-isomerism or ask your own question.

6
How is the configuration of an ester enolate double bond assigned according to CIP?
0
Is preference given to long alkyl group or branched cycloalkane?
2
Assigning Re and Si face for Carboxylic group
0
E, Z designation - what to do when substituents are identical on one side of the double bond?
2
How to assign priorities around the asymmetric carbon with its substituents having multiple bonds?
4
Which one has higher priority according to Cahn–Ingold–Prelog rules?
2
Cis and Trans Isomerism given three different groups around the reference plane
3
Cahn–Ingold–Prelog Rules, cyclic structures, and breaking ties
7
Assigning R/S configuration