Why are the absorption and emission spectra mirror images of each other?

In one of my chemistry courses we learned that the absorption and emission spectra are mirror images of each other, but I can't rationalize why.

I know that the electronic transitions in emission spectra is not very different from that of absorption spectra, however the spectra is shifted slightly to the right due to the presence of non-radiative decays releasing some of the energy absorbed. I can see how similar energy transitions can account for a similar shape, but why is it a mirror image in most cases?

The sketch below explains how the mirror image spectrum comes about. (the figure is not at all to scale, its just illustrative, but does show the salient features.) 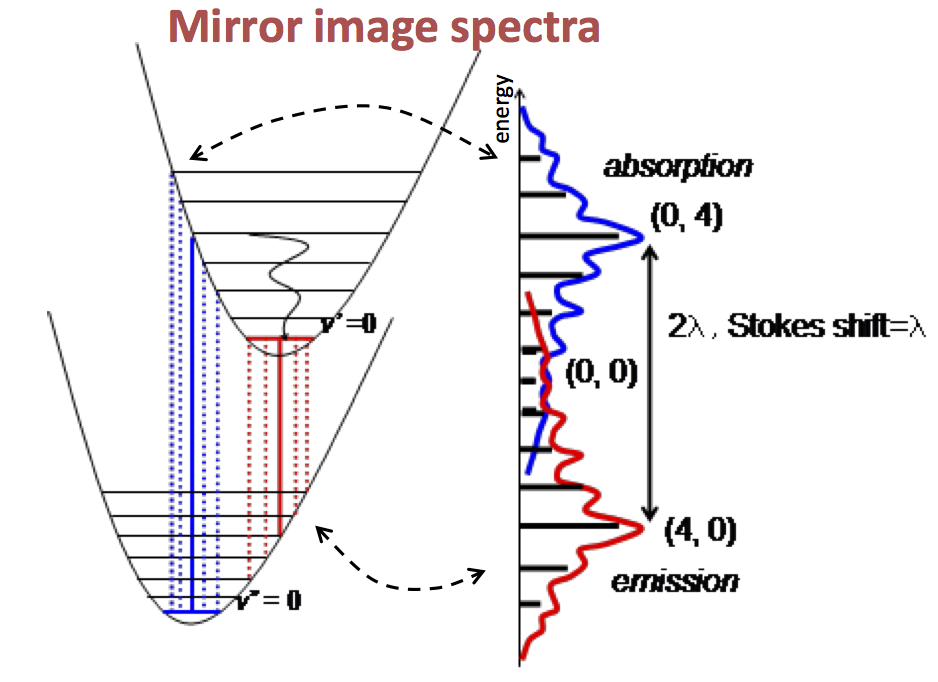 There are some conditions attached.

(a) mirror image spectrum is only observed in the condensed phase. This is because solvent collisions cause vibrational relaxation from the vibrational level excited and removes$^*$ energy to the solvent much faster than fluorescence can occur, thus all emission occurs from v=0. This vibrational relaxation occurs with a rate constant of $\approx 10^{13}$ s$^{-1}$.(This is not true in the vapour phase where if the pressure is low enough no collisions may occur within the excited state lifetime and fluorescence occurs from the level excited)
The intensity of each transition (not wavelength) in absorption or emission is governed by the Frack-Condon Principle. The strength of a transition is proportional to the squared modulus of the two wavefunctions. i.e. $|\psi _{s0} \psi _{s1} |^2$. In practice this means that overlap between vibrational levels in the two states is only large at the turning points of the wavefunctions, so transitions appear to be vertical. Classically this makes sense as momentum has to be conserved and this can only be achieved from vertical transitions starting and ending at the potential curve where kinetic energy is zero. In the quantum world the uncertainty principle limits change in position and momentum and so Franck -Condon Factors.

$^*$(The collisions preferentially remove energy as generally the excited state is at a higher 'temperature' than the surrounding solvent, i.e. it has more vibrational energy that the average $3k_BT/2$ of the solvent)

(b)The geometry of the excited state has to be similar to that of the ground state, thus mirror image spectra are observed for 'rigid'$^{**}$ molecules such as anthracene (3 benzene rings attached side by side) and not for flexible molecules such as cis or trans stilbene (phenyl=phenyl, where = is a double bond and this molecule isomerizes in the excited singlet state).

If the lowest triplet state has a similar potential to the singlet, which is usual if it derives from that singlet state (and not another higher singlet state) the the phosphorescence spectrum is very similar to the fluorescence, but shifter to longer wavelengths

$^{**}$ By 'rigid' is meant that the molecule has only its normal vibrational modes and no large torsional motion as is the case in stilbenes.

Not the answer you're looking for? Browse other questions tagged spectroscopy photochemistry or ask your own question.