It is possible to make an homogeneous solution of water and oil?

I wondered if in certain condition like very high pressure(so that water and oil remain liquids) and very high temperature(so that the variation of the Gibbs energy is negative--> ∆G = ∆H-T*∆S) we can make an homogeneous solution of water and oil.

Or, alternatively, mixing water and oil meanwhile applying an intense electric field so that the oil molecules get a charge such that they become soluble in water.

Do you think these methods could work? Is there any other way to mix them?

Generally polar and non polar liquids do not dissolve in one another to any great extent. Practically, you would have to find a temperature composition phase diagram for the oil you want to use. This will tell you if there is a region in which the water and oil are mixed as a homogeneous solution. Alternatively if you add surfactant then a ternary phase diagram (triangle plot) is what you need to look for since than micellar or liquid crystal phases may form.

As you mention the free energy I have tried to summarise what happens on dissolving a non-polar molecule in water.
The enthalpy $\Delta H$ change on placing, alkane, into water is small, slightly positive or negative depending on the compound, -9kJ/mol for ethane, +1.6 for toluene for example. This can be thought of as the cost making a void in the water to hold the molecule.

Water is unusual in having a strong and highly directional hydrogen bonding nature. Thus adding a non-polar molecule into water is determined by entropic effects. This generally means that $T\Delta S$ is negative and so $\Delta G$ is positive, for cyclohexane into water $\Delta G$ = +28 kJ/mol.

The entropy of water decreases on contact with non-polar molecules since these molecules cannot form hydrogen bonds. The water has to bridge around the non-polar molecules, as this is a lowering of entropy compared to not bridging. This bridging partly restricts the water molecules compared to bulk water. This option is preferable as the alternative of breaking hydrogen bonds, and leaving H atoms pointing at the non-polar molecules,is too energetically costly. Bridging makes it possible to form some H bonds at the expense of entropy loss. The figure shows this (from Southall et al. J. Phys. Chem. p521, 106, 2002 )

As the temperature increases the enthalpy increases as does T$\Delta S$, but $\Delta G$ remains largely constant and remains positive, see sketch below. This suggest that water and oil will not easily mix. 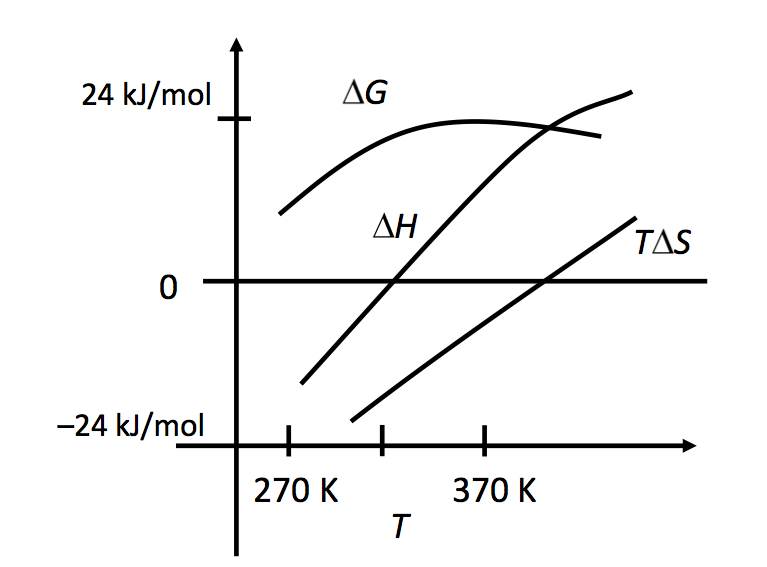 Not the answer you're looking for? Browse other questions tagged thermodynamics mixtures or ask your own question.

4
Why water can't mix with oil or cooking oil?
4
Gold nanoparticles in a water/oil environment
2
On Spontaneity of the Redox Reactions
1
homogeneous mixture - Are they truly uniform in composition and proportion?
3
Why did a former emulsion of oil and water precipitate after heating and cooling when heat made it originally?
3
How to Make Ferrofluid in a Bottle
4
Is there anything that doesn't mix with water or oil?
2
Mixing water and oil in microgravity outside of a container