Why is allyl chloride more reactive towards substitution than alkyl chloride?

Whereas in vinyl or aryl the halogen atom is connected to the sp2 carbon.

The key to reactivity towards $\ce{S_N1}$ is the stability of the formed carbocation. Allyl system stabilises the carbocation through overlap with the vacant p orbital (@gsurfer999 has shown the resonance structures in his answer below). However, note that any allyl halide wouldn't be better at $\ce{S_N1}$ than any alkyl chloride.

In fact, the tertiary alkyl chloride's rate of $\ce{S_N1}$ is faster than that of allylic chloride which is secondary at one end. (due to $\ce{+I}$ effect of 3 methyl groups as well as hyperconjugation)

Visual aid for stabilisation through hyperconugation (from Clayden):

For such comparison, here's a useful table again from Clayden: 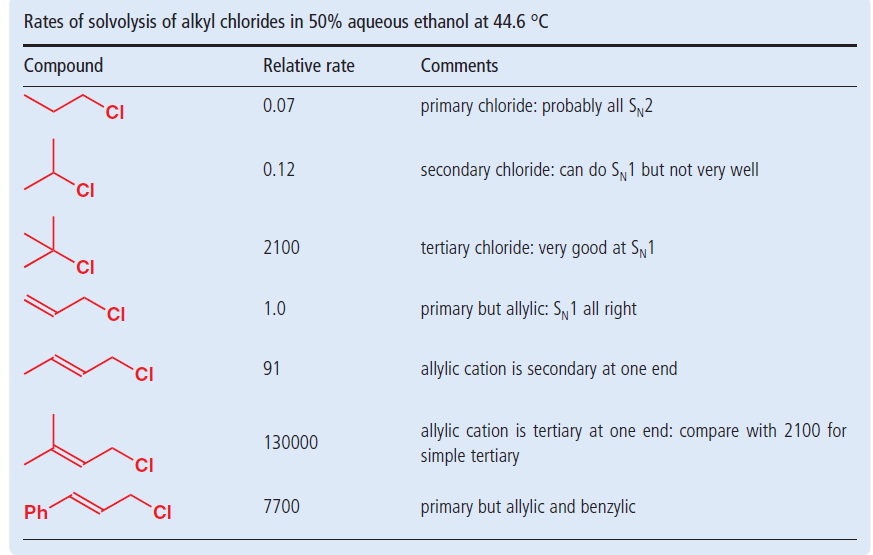 In $\ce{S_N2}$ the most important factor is the substrate. The reaction proceeds through a single transition state with trigonal bipyramidal geometry and $\ce{\sim sp^2}$ hybridisation of the electrophilic carbon. The p-orbital makes two partial bonds, one with the nucleophile and another with the leaving group. Thus, it's electron deficient. In such a case, the allyl system provides the additional electron density through conjugation.

However, again note that primary alkyl chloride is better at $\ce{S_N2}$ than allylic system due to least steric hindrance! 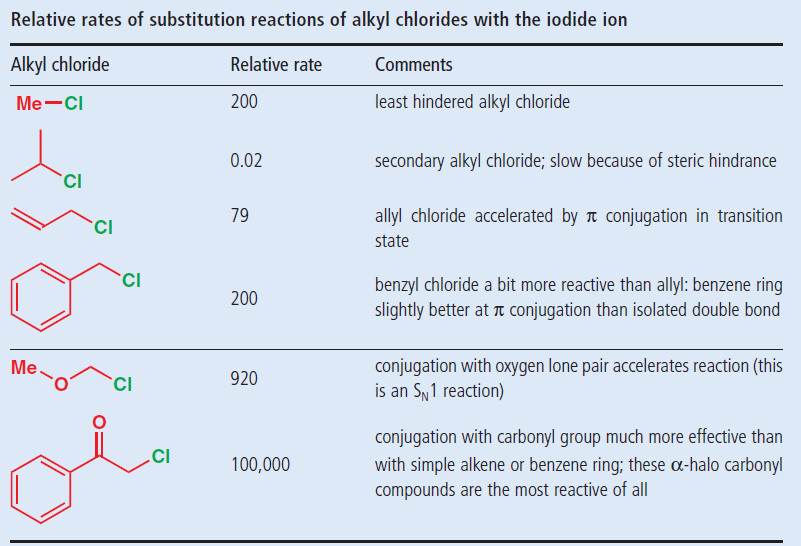 The allyl cation has delocalisation which decreases the energy of the system. This makes it easier to remove a halide.

Not the answer you're looking for? Browse other questions tagged organic-chemistry halides reactivity or ask your own question.

7
Why are carbonyl compunds more reactive towards catalytic hydrogenation than alkynes and alkenes?
2
Why is the reactivity of primary alkyl halides with nucleophiles (SN2 mechanism) greater than secondary and tertiary alkyl halides?
4
Friedel-Crafts Alkylation and hybridization
6
Why is methyl chloride a primary alkyl halide?
2
What is the difference between an Aryl Halide and a Vinyl Halide?
1
Bond Polarity vs bond length's effect on reactivity of haloalkanes