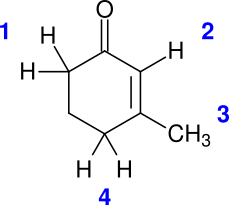 According to me it should be 2, as on its removal there won't be any resonance stabilization as would happen in the other cases. In addition to that a negative charge residing on a carbon attached to a double bond would be highly unstable.
But the answer key says that it is 3.

A follow up question: Which is the most acidic hydrogen?

According to me it should be 4 as it leads to a greater number of resonance structures.

You are correct. Position 2 is the least acidic.

What does position 2 have going for it? Why might it not have been marked as the least acidic? The lone pair that would be left in the conjugate base is sitting in a sp² orbital.

It is between positions 3 and 4 for the most acidic. I chose position three because alkyl groups (the rest of the ring) are electron donating by induction, but alkyl group also stabilize pi bonds, so position 4 is a good candidate for most acidic as well.

11
Which is more stable? A phenyl carbanion or a disubstituted vinylic carbanion?

20
Is HF the least acidic hydrogen halide?
5
Which dicarboxylic acid has the most acidic hydrogen?
1
Which lone pairs/bonding pairs go into which pi molecular orbitals?
14
Which is the most acidic hydrogen in vitamin C
16
How sure can we be about the structure of purine?
0
Para effects on substituents in aromatic compounds
9
Assigning R/S configuration
7
Electrophillic susbtitution of bromine on styrene and cinnamic acid in the presence of FeBr3, a Lewis acid
5
Formation of enamine for unsymmetrical cyclohexanone derivatives